NOW MagazineNewsEven though the bylaw changed, the postering battle continues

Even though the bylaw changed, the postering battle continues 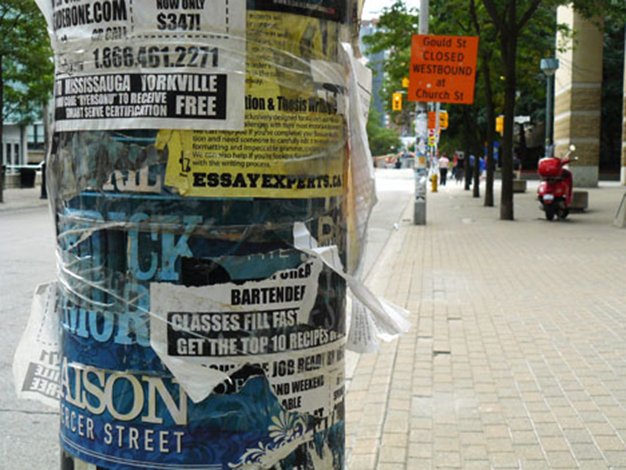 It seemed like the issue of music venues being ticketed when bands put up posters for their gigs had been finally put to rest in June, after Municipal Licensing & Standards worked out a solution with the Toronto Music Advisory that would stop the practice.

So why was Cadillac Lounge owner Sam Grosso back in court again this past Tuesday, fighting postering fines again?

“They changed the bylaw, so why am I still being charged with this?” Grosso says over the phone to NOW, clearly annoyed.

Grosso says the bylaw still makes it difficult for any music venue to avoid fines when bands put up posters.

“There’s a sub-paragraph that says if the venue is profiting from the event being advertised, then the venue can still be charged. But that’s why we’re in business: to make profit.”

According to the city, though, his situation isn’t actually representative of how the policy has shifted since the spring.

“The charges being heard on Tuesday were laid prior to the agreement date with the music industry regarding postering,” explains Mark Sraga, director of investigations. “There have been no new charges laid against venue owners since the agreement in June.”

Still, given that the official policy has changed, why are old charges still making their way through the system? Sraga says the city is taking further actions to address that problem.

“Moving forward, Bylaw Enforcement staff will work with Legal Services to review charges that were laid prior to the new agreement and assess the appropriateness to withdraw the charges.”