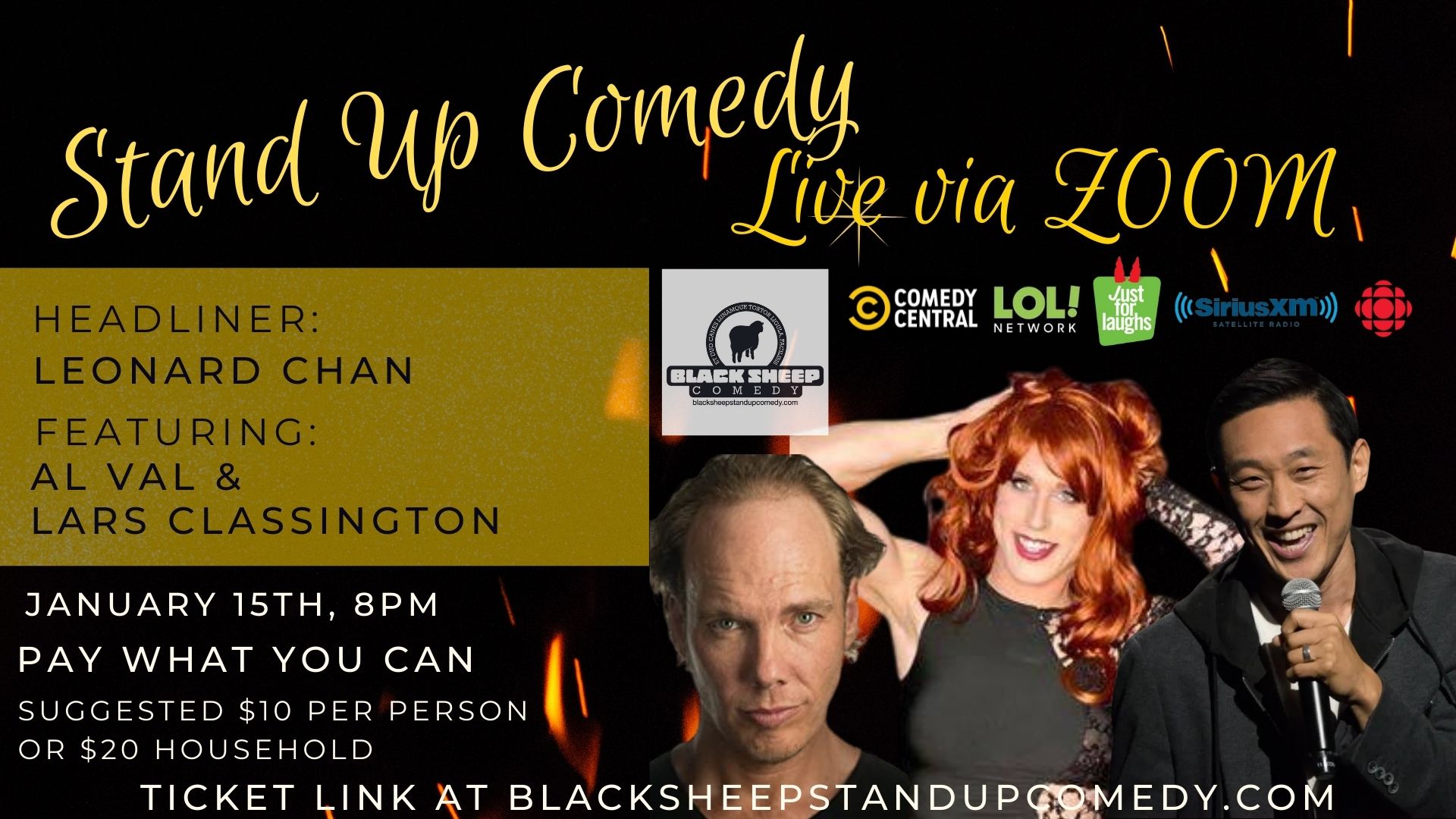 Your Zoom link will be emailed to you one hour before show start time.

Leonard Chan is a writer/comedian from Toronto, Canada.

As a comedian, he has been heard on CBC’s The Debaters, Laugh Out Loud, and Sirius/XM radio, published on CBC Comedy and The Beaverton, seen on stage at the Winnipeg Comedy Festival, the Halifax Comedy Festival, JFL42, worked with Ronny Chieng, Rhea Butcher, and Joel Kim Booster, and was one of the New Faces at Just For Laughs in Montreal.

Leonard is a writer and on air correspondent for This Hour Has 22 Minutes, and has an original comedy in development with CBC. He was one of five finalists selected for the CBC Originals Stand Up and Pitch contest at the Just For Laughs festival in 2018. He also spent a little time in the writer’s room for international TV hit Kim’s Convenience.

He has two degrees in chemical engineering which he now uses only as punchlines and an excessive (but still legal) number of cats.

Despite the pandemic, Al Val has enjoyed a meteoric rise in the Canadian comedy scene. In the three short years since Al came out as trans she has made appearances at Just For Laughs, JFL NorthWest, Off-JFL/Zoofest, and has taped stand-up sets for CBC Gem (“New Wave of Standup”) and Crave TV (“The Stand-Up Show with Jon Dore”). A skilled improvisor, Al has taught both children and adults in the art of improvisation, host’s her own weekly solo stream-of-consciousness podcast “PodGis”, is graduate of Second City’s Conservatory Program, and one part of improv-rock musical duo “OverDude”, there’s no wonder this effervescent, multitalented whirlwind was voted by her peers as 2020’s “Breakout Comic of the Year” (in the ‘male’ category, no less – really stickin’ it to the fellas!).

Between her boundlessly high energy, vulnerable, clever, insightful perspective, and spontaneous, silly delivery, Al Val is surely a dynamic, exciting entertainer whose charm you will surely be unable to resist!

Lars answered a Kijiji ad “So You Wanna Be a Comedian?” resulting in an exhilarating standup debut at YukYuks.

Three months later, he was the warmup act for comedy talk show “London Tonight with Jeff Leeson”, a role that expanded to writer, announcer, producer and standup tour opener for Jeff.

In 2012, Lars moved to Toronto for more standup opportunities and started working in TV & Film.

Some Highlights So Far: Working with Jason Momoa on his epic series “SEE” (APPLE+), 5 episodes as “Lou The Main Man” on Oh Yuck! (NETFLIX), 20 episodes on sketch comedy show Almost Genius (CMT CANADA), lead role in Fear Thy Neighbor (DISCOVERY), recording his debut standup album ‘Silly Goose’ his hometown Orillia, ON and releasing it during a global pandemic.

Event Price - Pay What You Can