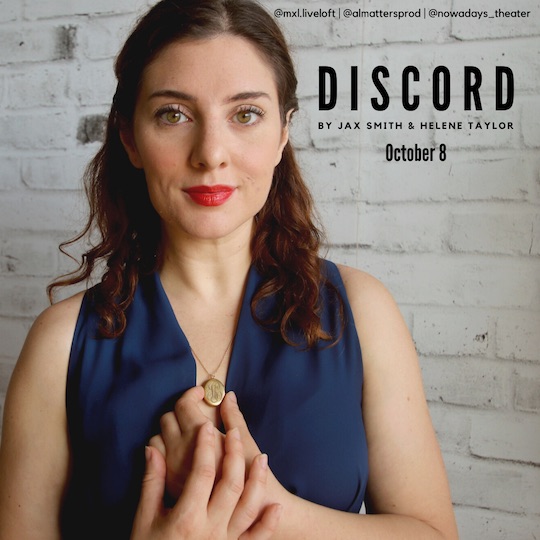 Where is the line? – Three short plays – MOTHER, MPDG, and DISCORd, will be digitally mounted by alma matters productions and MXL Live Loft. This co-production will be streamed via YouTube on Oct. 8th at 8 pm EST/5 pm PST. Tickets are available at Eventbrite  on a Pay-What-You-Can system ($15 minimum). 20% of all ticket sales will be donated to the CDA Institute Afghan Refugee Program, which helps to facilitate the arrival of Afghan Refugees into Canada. This theatrical trilogy explores the fringes of life and death, reality and fiction, and the boundaries of consent. Challenging these evolving structures, these plays give us pause to reflect and question: “Where is the line?”

This question is asked by the lead character Jane, in DISCORd, a prodigy pianist who becomes unhinged when she interviews with a sexually predatory music director, and is seemingly given her dream at the expense of her deceased mother’s legacy.

DISCORd, the first play in the evening’s lineup, is informed by writers Toronto’s Jax Smith and Vancouver’s Helene Taylor’s classical background in dance and music. Smith attended programs with schools like The Kirov Academy of Ballet and The American Ballet Theatre. Taylor came of age in the Royal Conservatory of Music.

The alma matters and MXL Live Loft co-production on October 8th will be in support of the CDA Institute Afghan Refugee Program. 20% of all ticket sales will be donated to this organization, which helps to facilitate the arrival of Afghan Refugees into Canada.

DISCORd will be performed by Sarah Marchand, Anand Rajaram and Mahsa Ershadifar. Directed by: Jonathan Shaboo.