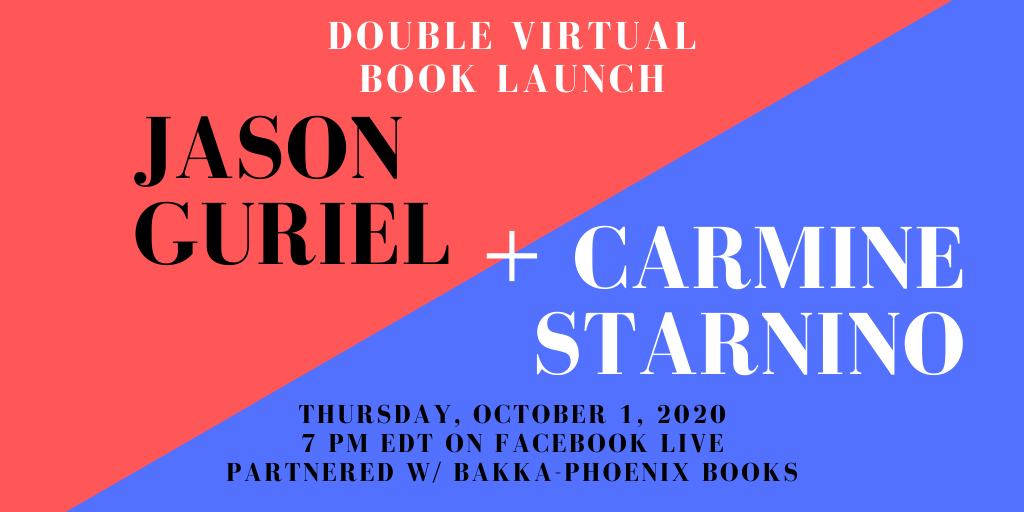 FORGOTTEN WORK:
In the year 2063, on the edge of the Crater formerly known as Montréal, a middle-aged man and his ex’s daughter search for a cult hero: the leader of a short-lived band named after a forgotten work of poetry and known to fans through a forgotten work of music criticism. In this exuberantly plotted verse novel, Jason Guriel follows an obsessive cult-following through the twenty-first century. Some things change (there’s metamorphic smart print for music mags; the Web is called the “Zuck”). Some things don’t (poetry readings are still, mostly, terrible). But the characters, including a robot butler who stands with Ishiguro’s Stevens as one of the great literary domestics, are unforgettable.

DIRTY WORDS: SELECTED POEMS 1997-2016:
Dirty Words offers a selection of Carmine Starnino’s best poems, drawing from his five published collections: The New World (1997), Credo (2000), With English Subtitles (2004), This Way Out (2009), and Leviathan (2016). Arranged chronologically, Dirty Words follows the development of Starnino’s formal and thematic preoccupations over two decades, revealing how his affinity for rhythm and sound, his muscular ratcheting of language, and his facility for keen observation and evocative description deepen with each new offering. While his poems and their subjects—such as relationships, family, Italian-isms, uprootedness, and masculinity—are nested in the familiar context of contemporary culture, Starnino’s particular artfulness with language and form result in moments of beauty and insight where the personal takes on transcendence. Yet always, his poems are rooted in elemental human experiences: as he writes in “The True Story of my Father,” I would like this, finally, to be a story of love.