Six crazy things that happened at the Raptors game 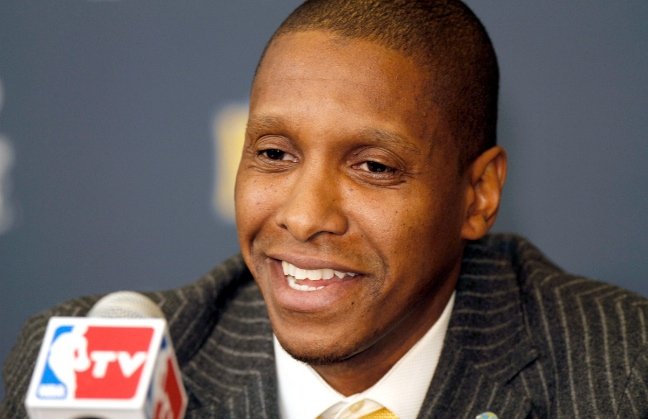 Never mind what happens in the regular season: the playoffs are a completely new ball game. It’s a huge sporting cliché, but Saturday afternoon at the Air Canada Centre, it couldn’t have been more accurate. Facing the Brooklyn Nets in Game 1 of their first-round playoff series (their first playoff berth since 2008), the three-seed Raps fell to the older, wiser six-seed Nets. But the 94-87 loss wasn’t even half the story.

Here, six crazy things that happened during a disappointing loss that never failed to entertain.

The shenanigans started before game 1 even began. Masai Ujiri – the Raptors GM many people credit with turning this organization around – tried to pump up the large, enthusiastic crowd gathered just outside the ACC, in Maple Leaf Square, by employing some colourful language. With a gigantic smile on his face, Ujiri’s parting words to the 10,000-strong assembly were an emphatic “Fuck Brooklyn!”

The crowd, of course, went wild.

“I apologize, I used the wrong choice of words out there. This thing is really not about me, it’s about the players and the playoffs,” he said. “I apologize to the kids out there and to the Brooklyn guys, nothing against them. I was trying to get our fans going, that’s it.”

That was it. Until a reporter asked,

“Is that how you feel, Masai?”

Addressing the media post-game, Coach Dwane Casey had nothing but support for Ujiri.

“It doesn’t offend me whatsoever. That’s Masai. He’s a fiery guy. That should represent how we feel and I don’t have any offence to it whatsoever.”

Well, we agree with Casey wholeheartedly, even if the NBA will probably be super pissed. For his part, Nets head coach and apparent ice-king Jason Kidd had this to say when it was his turn at the podium:

Is it inconsiderate to drop an f-bomb in front of a Saturday-afternoon crowd that surely contained a few families? Sure. But it is equally badass and awesome. And it’s nothing the kids won’t have heard on the subway. Besides, Canadians are too nice. If we want to beat a team with some of the all-time nastiest players – Kevin Garnett and Paul Pierce – we gotta be fierce. Plus, public swearing, I’d say, is on par with – if not preferable to – having your children subjected to the gyrations of half-naked cheerleaders (er, sorry, dance packers) during commercial breaks.

I love the “We Are The North” matching white T-shirts the ACC gave out to every fan, but me? I’m getting my #FUCKBROOKLYN tee printed in time for Tuesday’s game.

Not two lines into the Canadian national anthem, and wasn’t the crowd belting so loud and strong that the anthem-singer turned the mic away from himself and let us do the work. Very selfless. And chills-inducing. Toronto is a playoff-starved city, and every time we make it to the post-season it’s a matter of national pride. Go Canada.

Whoops! Not long into the second half of the basketball game, our shot clock broke down. After at least a ten-minute delay where its resurrection was futilely attempted, play resumed, this time with the announcer having to say “24” every time a new shot clock started, and then “10” when there were 10 seconds left, and then straight-up count down from five to one in the dying seconds. It was AWK-ward. And semi-fallible. And it killed the fan momentum. How do you cheer when there’s someone yelling “24” at you every four seconds? And if you’re a player, what a distraction!

The PA was so dedicated to the cause that he would actually yell “HORN!” when the horn was supposed to go off. I am not kidding about this, though, I wish I was.

Kyle Lowry and Jonas Valanciunas were both good sports about it afterward, though. Lowry said, “It’s not that disruptive, it is what it is. You can’t make excuses.” Valanciunas chuckled at memories of games in Lithuania where the same thing occurred. “You know, technical difficulties. There’s nothing you can do about it.”

Sure, guys. But we all know it was a buzz-kill. And it seemed to affect the Raptors far more than it did the steely, veteran Nets squad.

Whoowee! When the Raptors drafted the Lithuanian centre back in 2011, expectations were high that we’d found our own Dirk Nowitzki. A European saviour that was bound for a long and fruitful career with our franchise. Two seasons in, the 7-foot centre is showing signs of a bright future, for sure. But game 1 was a statement. Battling with Garnett and the rest of the Nets bigs, Valanciunas was the most impressive Raptor of the night. Sprinting out of the gate with 8 points and 8 rebounds in the first quarter alone, he finished the game with 17 points and 18 rebounds in 35 minutes – becoming just the second Raptor with a double-double in his playoffs debut. (Insert whatever the Lithuanian word for “Bravo!” is here.)

Whether it was the aforementioned 10,000 in Maple Leaf Square, the 18,000-odd strong holding down the ACC itself, or those special fans in the house that just make your heart leap a little – international rap sensation Aubrey “Drake” Graham and beloved Raptors alum Alvin Williams, for example – Toronto was into this game. They cheered and clapped and booed when appropriate.

Something, inevitably, always sucked, so fans took to chanting “Refs, you suck!” (which sounds dangerously like “Raps, you suck!”) or “KG sucks!” (which sounds dangerously like “JV sucks”) or, buoyed perhaps by Ujiri’s laissez-faire take on profanity, “Bullshit! Bullshit! Bullshit!” It was, perhaps, a little juvenile, but we can’t expect everyone to start yelling “Raptors, hang on! Don’t let their age and experience undercut your youth and athleticism!” now can we?

At one point, the Nets missed 19 straight three-pointers. That won’t happen again. The Raptors made 19 turnovers in total. Let’s pray that doesn’t happen again. After losing game 1 and pretty much relinquishing their home-court advantage, the Raptors will need to come back with 19+ ways to tire out those old, wiley Nets.

Game 2 of the Raptors vs. Nets happens Tuesday, April 22, at the Air Canada Centre.