NOW MagazineNewsFacadism: is it an architectural plague or preservation?

Facadism: is it an architectural plague or preservation?

As a last-gasp practice aimed at saving what’s left of our heritage buildings, Toronto has turned to building above, behind and inside them with results that are often bizarre and grotesque 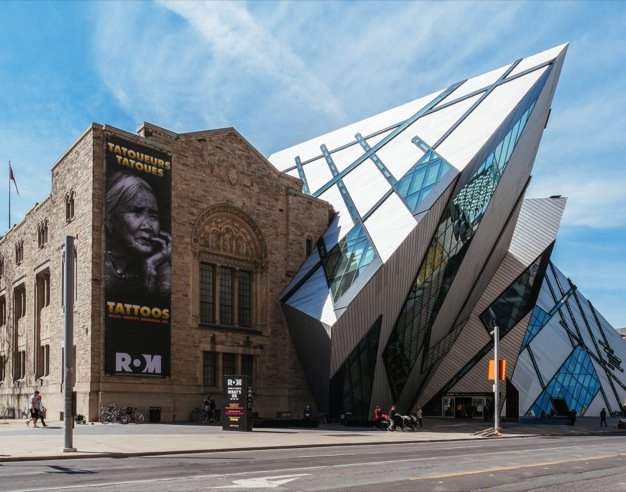 It might be the dirtiest word in the conservationist’s dictionary, unless you prefer “facodomy” or landscape architect and planner Bob Allsopp’s “urban taxidermy.” It cannot be popular among architects either, who would rather design buildings that are wholly their own.

But if facadism – building new structures above, behind or inside the skins of heritage buildings – is so heinous, why is it so common?

Is it because, since Torontonians have lost so much of their city’s past, they are determined to hold on to fragments of what remains? Or is it because so many architects seem to have lost the knack of creating building fronts that impress, awe, intrigue, enchant or invite us to explore within?

If that is what facades are supposed to do, why are we so often confronted instead by bleakness and banality on the faces of new buildings? Is facadism a creator of monsters and mutations or is it an architectural movement whose products can be good, bad and indifferent?

In a Toronto clear-cutting, replanting and regrowing itself at a pace that’s transforming its skyline month by month, facadism is epidemic, with results that include the bizarre, the grotesque, the dramatic and the ridiculous, but rarely the sublime.

Michael Emory is president of Allied Reit, the firm responsible for Queen-Richmond Centre West at 134 Peter – possibly the most spectacular conservation project in Toronto, an 11-storey glass tower that straddles a four-storey former Weston Bakery built in 1912.

Three quads of intersecting 23-metre-high tubular white “jacks” share the building’s weight in an L-shaped atrium where two sides of the bakery provide an early-20th-century industrial backdrop. If this is a monster, it is a magnificent monster, and in the opinion of Globe and Mail architecture critic Alex Bozikovic, “a model for how heritage conservation and innovative design can support each other.”

Emory credits the frequency of heritage conservation of all kinds, including facadism, to a growing interest in architecture old and new in an increasingly dense, walkable, bikeable and, because it’s less driveable, slower city. Forced to look more closely at our streetscapes, we become more aware of our surroundings and more demanding of excellence in neighbourhoods that are rich in architecture of all ages.

Michael McClelland, of ERA Architects, whose projects include the conservation of Maple Leaf Gardens, the Don Jail, the Bloor-Gladstone Library, Bay Adelaide Centre East and more, is sick of the word “facadism.”

“Naming everything you don’t like facadism has got to stop,” he says. “Heritage conservation requires much more thought. We must clearly define what we understand to be the heritage of our city. If we try to save everything, we cannot be successful.

“Consider Kensington Market [now in the process of being designated a Heritage Conservation District]. Are we more afraid of losing its bricks and mortar or what its buildings contain: its cheese shops, its vintage clothing stores, its nightlife? Downtown Yonge Street and Queen West and East pose the same question. If we want effective conservation, we need to explore more fully what it is we are trying to conserve and develop new tools to do so.”

Mary MacDonald, senior manager for Heritage Preservation Services with the city, is constantly faced with the question “What to conserve?” – especially when she urges the conser-vation of entire buildings. Challenges include an assessment process that taxes properties at “highest and best use” rate, which discourages ad-aptive reuse and whole-building retention.

Heritage Preservation Services must also deal with structural challenges, especially where development requires excavation for deep foundations and underground parking beneath heritage buildings. Some-times nothing more than a “skin” can be preserved, or the building may have to be dismantled entirely and reconstructed, though not always exactly as it was or in the same location.

Woodcliffe Landmark Properties founder Paul Oberman was a passionate advocate of whole-building restoration and was responsible for projects that included the flatiron Gooderham Building at Front and Wellington, North Toronto Station (now the Summerhill LCBO) and the “Five Thieves” shops on Yonge Street.

He was famous for this question: “How will we create a vibrant urban environment consisting of exciting and remarkable built forms if we turn our backs on the great achievements – and even the mere survival – of our past?”

In 2010, Oberman was arrested for lying down in front of a bulldozer that was about to demolish one of the hangars at Downsview Airport that he’d fought hard to preserve. He died in 2011, at 53, when his plane iced up over Maine on its way home from Halifax to Toronto. One week later, his wife, Eve Lewis, took charge of Woodcliffe and his next project: restoration of Market Street beside the St. Lawrence Market.

She knew that “no heritage restoration is as straightforward as you first envision,” and that turned out to be especially true of Market Street, where old structures were built on pilings on land reclaimed from Lake Ontario in the 1850s to make room for Toronto’s first railway. Their exteriors proved to be in such bad shape that bricks in the outer walls had to be removed one by one and turned around so their fresher side faced out.

In 2014, Market Street was reopened by Lewis and former mayor David Crombie, who named the row Paul Oberman Walk.

Lewis concedes that sometimes there is no alternative to facadism, but she’s enthusiastic about the effects of heritage conservation of all kinds: “It puts more people on the street, in neighbourhoods that were frightening when I was younger, that are now busier, more vibrant, more prosperous and safer.”

Chris Borgal of GBCA (Goldsmith Borgal & Company Architects), worked on many of Woodcliffe’s projects and won awards for them, as well as for restorations of the National Ballet School, Evergreen Brick Works and the James Cooper Mansion. He’s now working on the Concourse Building at 100 Adelaide West and the revitalization of Massey Hall. He cites structural reasons for choosing facadism, and aesthetic reasons for allowing it.

“Much of the artistry of architecture of past years, particularly of commercial and industrial buildings, was applied to the design of only the front wall,” he says. “Digging into interiors and side and rear walls, we frequently find cheaply constructed structures. Considering the demands of modern occupancy, not all heritage buildings can be recycled. In places with high development pressures, decisions must be made as to what are the most important elements.”

If not facadism, then what? If whole-building conservation is not possible and facadism is unacceptable, what’s the alternative?

Stollery’s men’s clothing store seemed like an anchor embedded in the bedrock of traditional Toronto until it vanished almost overnight in January 2015. It shouldn’t have, but the lightning demolition over a weekend of the 1929 art deco landmark took everyone by surprise.

Demolition is now complete, the site and buildings to the south cleared for a proposed 84-storey tower to be called The One. If constructed, it will be the tallest building in Canada. The facade of the William Luke Buildings (constructed in 1884 at 774 Yonge) will be incorporated into the podium, the stones of Stollery’s turned into a monument. Of course, a monument preserves even less than the facade of a once elegant and admired building, but lovers of Toronto’s architectural heritage will be grateful even for that.