Like fans at a pop concert, Ford Nationals band together against the haters at campaign launch 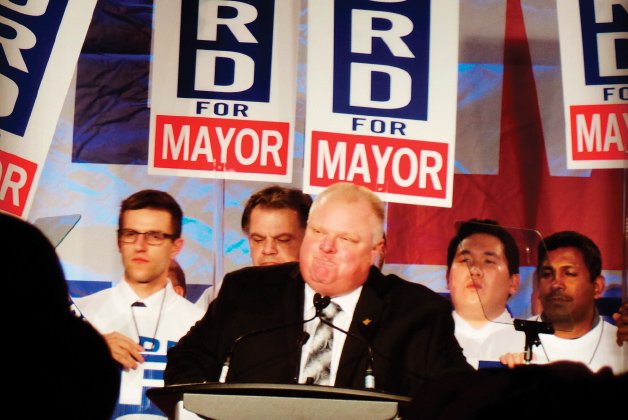 The man who identified himself as the Ford family’s former postman had an LED ticker on his chest.

“ROB FORD IS OUR MAN, IF HE CAN’T DO IT NO ONE CAN,” it slowly, but repeatedly revealed. Also in its electronic repertoire, as observed by another journalist: “KISS ME I’M FORDISH.”

The display was certainly eye-catching, but in the context of Mayor Rob Ford’s April 17 campaign launch party, neither the message nor the medium seemed terribly out of place.

Another gentleman, who had previously attempted to run his dog for city council (to protest the decision to fill a vacancy by appointment instead of by-election), clutched two handfuls of chocolate eggs as he approached NOW’s videographer and me while bawking like a chicken.

Not every remaining Ford supporter is a character, to be sure, but a disproportionate number of them are. For better or for worse, Olivia Chow and John Tory’s respective launches did not have a man clad head to toe in various manifestations of the Canadian flag. But, then, neither did they have a full-size fire truck of questionable provenance parked off in a corner and decorated with banners touting the imagined achievements of the candidate.

In Rob Ford’s orbit, the outlandish becomes acceptable and even valued and integrated. He is an entrenched, formalized cause for those whose frustrations and desires might not otherwise benefit from a unifying theme.

Last summer, upon visiting the Scarborough Ford Fest, I wrote that many who feel disenfranchised not just by the political establishment, but by the entire social hierarchy have found in him a vehicle for asserting their right to shape the world in which they live.

Since then, it has only become more difficult to examine Ford Nation – those who still, despite everything, believe that Ford is both fit for office and uniquely suited to it – without falling into the traps of ethnography, exoticization and othering.

There are clearly fundamental differences of understanding at play, disparate conceptions of principles, tenets or even facts that most of us would consider settled.

In February, erstwhile Science Guy and ardent evolutionist Bill Nye took on the founder of Petersburg, Kentucky’s, Creation Museum in a high-profile debate. BuzzFeed dispatched staffer Matt Stopera to turn it into viral content, and he achieved a particular feat of provocation and empowerment by asking attendees to share questions they would like to pose to the other side.

Once you’ve heard all the usual lines in support of insupportable arguments (How can there be life if there is no God? Who will watch tax dollars if there is no Ford?), it can be tricky to push further.

I spoke to approximately 10 Ford adherents, submitting my queries in this order: If you could ask Rob Ford one question, what would you want to know? What’s the best thing he’s done so far? Has he done anything that’s been disappointing to you? What would you want him to do in the next four years if he gets re-elected? Do your family and friends feel the same way about Ford that you do?

Clear and unsurprising themes emerged from answers to the first four. (Ford’s persisting champions most frequently cite his budget wrangling and care for their hard-earned money as his top qualities, and are disappointed by but willing to forgive his, uh, extracurriculars.) But the last opened up little, narrow windows into lives outside of Fordstock, outside talk of tax dollars and scheming councillors.

Do your friends and family feel the same way?

A man from Brampton who had earlier equated marijuana use to crack use: “No. Everybody has their own opinion. We don’t argue about it. You know, but I just think that, I dunno – breath of fresh air. He’s real. He may not be perfect – he’s not perfect by any stretch of the imagination.”

A woman with a nose stud who wants Ford to lower gas and electricity bills: “Not all of them. But I have been a champion for him all along. I don’t care. Like, he’s my number-one guy.”

One of the brothers who owns Steak Queen, who compares Ford’s magnetism to Arnold Schwarzenegger’s: “Probably not, I think it’s more of a new generation than old generation. My parents don’t know Rob Ford as much as I do.”

The aforementioned clucking gentleman: “No, my family and friends, they’re totally … Like, I’m a political junkie. I get up at 4 am and I read all the papers. So they haven’t got a clue. A lot of people don’t even know what [Premier Kathleen] Wynne did. A lot of people, you ask ’em about the gas scandal, they don’t know nothing about it. So there’s a lot of ignorant people out there.”

And others: “One hundred per cent.” “Yes. Oh yeah.” “They feel the same way, that Rob Ford deserves another chance of being re-elected.”

Each word is a pointillist dot filling in a corner of a canvas splashed with the family and social dynamics surrounding a particular life. There’s a glimpse of how these people situate themselves in relation to others and of the common thread tying them together.

Most of the people who love Rob Ford are very aware that there are many others who do not. And like fans at a pop concert, they band together at Ford events in both a collective embrace of their idol and a welcome escape from the haters. I don’t, and can’t, understand it any more than I can get into the heads of those who’d hold up Michael Bublé as the epitome of music. Much as we like to persuade ourselves otherwise, political preference can be as subjective as any cultural taste.

Darting through the hall to grab my recorder as the speeches began, I crossed paths and made eye contact with a cousin of mine decked out in a Ford Nation shirt. He was volunteering.