Bare some skin at your peril. Facebook is so vexed by the nudity in the January 7 issue of NOW. 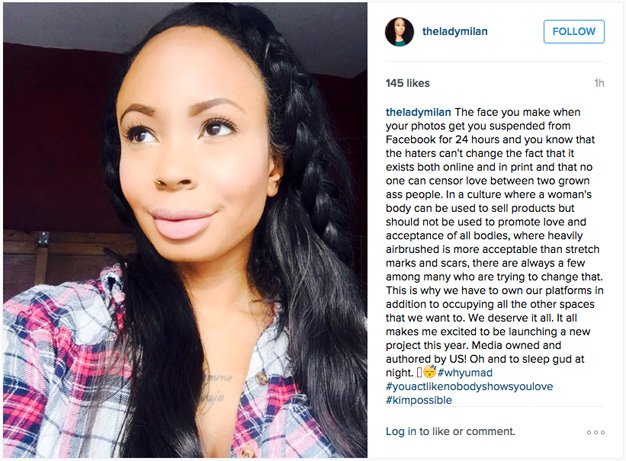 Bare some skin at your peril. Facebook is so vexed by the nudity in the January 7 issue of NOW that the platform has suspended the pages of Love Your Body issue participants Katie Sly and Kim Katrin Milan, who was photographed with her husband Tiq Milan.

Sly tells NOW that her Facebook page has been blocked and she has been suspended from using her account for 24 hours. She wrote to Facebook requesting a dialogue and citing that she is not breaking any decency laws where she lives, but has yet to receive a response.

We could comment on the ludicrousness of such a thing, given the extent to which women’s bodies are shamelessly used all over mainstream media and the fact that NOW’s feature is designed precisely to battle that kind of exploitation.

No one can censor love between two grown ass people. In a culture where a woman’s body can be used to sell products but should not be used to promote love and acceptance of all bodies, where heavily airbrushed is more acceptable than stretch marks and scars, there are always a few among many who are trying to change that. This is why we have to own our platforms in addition to occupying all the other spaces that we want to. We deserve it all. It all makes me excited to be launching a new project this year. Media owned and authored by US! Oh and to sleep gud at night. #whyumad #youactlikenobodyshowsyoulove