Facing up to change 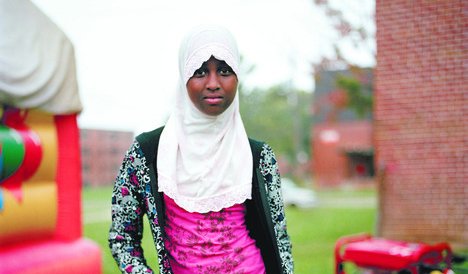 The neighbourhood north of Lawrence, containing assisted and affordable housing built in the 60s, has been called The Jungle, both because of its maze-like tangle of residential streets and its crime rate.

The area has recently been slated for revitalization to remedy the social and physical isolation that gave it its image as an urban ghetto. This show focuses on youth who are living in the area and dealing with its current challenges.

Friedman’s portraiture, however, takes us beyond the mythology the media and urban folklore have built around the nabe. In keeping with Contact’s theme of Figure And Ground, her subjects command the centre of each frame while the landscape of the neighbourhood recedes slightly, delivering the story of each young face as simply and directly as possible.

In her deft treatment, these faces carry the instantly recognizable ten-or of adolescent defiance, shyness or vitality. Photographs are a record not only of the subjects but of their relationship to the personality behind the camera. Friedman has obviously managed to connect to each of them and help them feel at ease, as the helplessly giddy smile of one young boy, hat cocked to the side, attests.

It’s also clear that they’re aware of the multitude of complex cultural and societal challenges they face as a generation of newcomers in a fractious neighbourhood. The portrait of Salma staring with cautious curiosity into the camera captures the nuanced fragility of a young Muslim woman facing adulthood.

Arranged in the ticketing area around Yorkdale subway station, a popular haunt of Lawrence Heights residents, Friedman’s photos ignore the headlines to bring us face to face with a new generation.