Fall Stage Preview: Why dancers are moving to tech careers 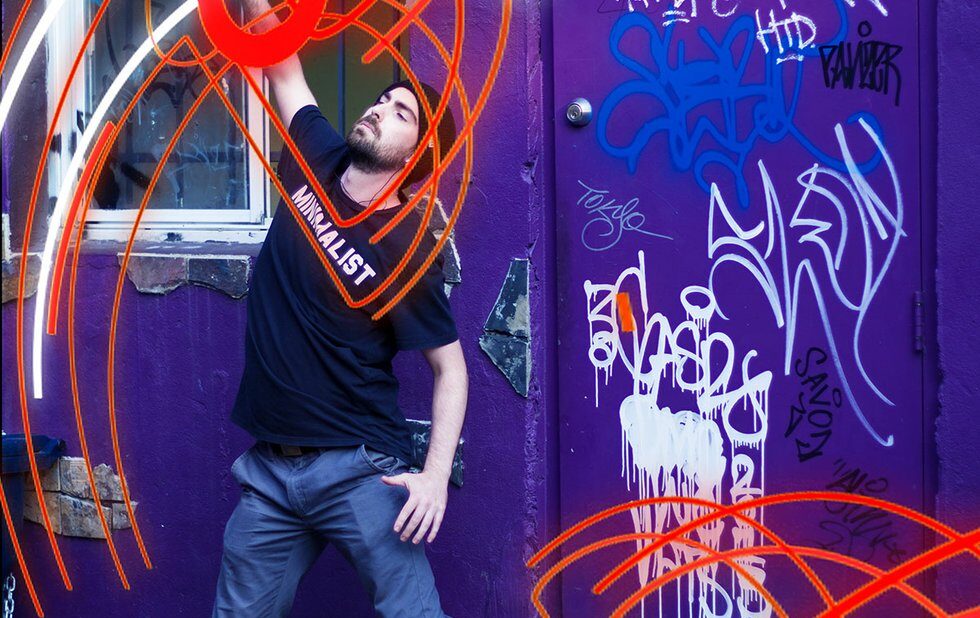 To many, the word “tech” sounds intimidating – obscure and abstract.

“And that,” says Luke Garwood, “is not unlike what people think of when they hear the term ‘modern dance.'”

Garwood, a contemporary dancer and third-year OCADU digital arts student, is part of a new generation of professional dancers with concurrent careers in tech or media.

He’s still hugely in demand as a performer – you can see him onstage in what it’s like, Heidi Strauss’s new ensemble work at the Theatre Centre through October 2. But he also spends a lot of time coding, programming and working with Arduino components. His augmented reality (AR) performance app Ephemeral is available for downloading at the Apple Store.

Garwood recognizes the commonality in all his interests: the body. As a society we may be heading toward increasing reliance on tech, but there is no real escape from corporal concerns, especially as tech makes its way onto the body via wearables, bionics or virtual reality (VR).

“The biggest trouble with VR right now is with motion sickness,” Garwood tells me. “It’s coming from a place where people may not have considered the body. Where you are in your body is actually important.”

Dance and technology have been flirting with each other for some time. What we now consider “older” technologies – photography, filmmaking – regularly intersect with the movement arts, often to stunning effect.

Tedaldi feels his dance training uniquely qualifies him to meld movement and media.

“As a dancer, you perceive movement from every angle,” he says. “Our bodies are 3D. We worry about shapes from every angle. When you’re filming dance, you aren’t just shooting it from the front – you can dive in and shoot from whatever angle you want. Film can be used to inform the movement and give viewers the specific experience you want to give them.”

Tedaldi admits that maintaining an elite ballet career is all-consuming.

“I’m not truly committing to media until I’m ready to make dance less of a priority,” he says. Still, he hopes to squeeze in some more video projects this fall with sculptor Harley Valentine and the Berlin Fashion Film Festival. And you can catch him in action as a dancer taking company class on World Ballet Day, October 4, an international live-streamed behind-the-scenes program featuring the NBOC, the Bolshoi and three other major classical companies.

Dancers’ innate grasp of concepts like 3D, motion capture and space/time makes it truly exciting when they learn to write code or create mobile apps.

Both Tedaldi and Garwood work regularly with Jacob Niedzwiecki, another former ballet dancer who grew up coding and programming. Today he choreographs site-specific works such as Jacqueries, which combines live performance with AR and a mobile app.

Like many in the arts, Niedzwiecki thinks a lot about how and why to assemble an audience.

“We keep talking about putting things online, but that doesn’t necessarily have an impact on the way people experience a work. They don’t jack into some cyberspace total sensorium they watch it on their phone on the subway or they watch it from their couch on their TV. Online doesn’t actually exist.”

Niedzwiecki is working on a number of upcoming projects that deal with these ideas about experiencing art alone and together, notably an augmented reality performance project using performers captured in 3D at TIFF’s annual Boombox fundraiser on October 27.

Like his colleagues, Niedzwiecki has crafted a career with fluid boundaries that blends live and constructed environments. Grounded by meticulous training and fired by curiosity, he glides between disciplines to get what he needs. Increasingly, that’s the way artists are working.

Amanda Hancox, executive director of the Dancer Transition Resource Centre, which provides career counselling and retraining grants for professional dancers, says there’s been a spike in the number of dancers looking to transition into or develop a parallel career in tech/media.

“Dancers today have to be more creative about their careers because of the way the world is now. Even some dancers working in companies have their fingers in more pies now than before.”

Hancox believes that the idea of transition has become more nuanced for professional dancers. It doesn’t always have to mean stopping one thing to start another.

Certainly Garwood sees his experiments with electronics, programming and augmented reality more as an extension of his practice than a parallel career.

He’ll dance as long as he’s able, though the material rewards in Toronto can be slim.

“It’s difficult when you see a 19-year-old web developer making $45K a year to start,” he says. “It’s hard not to be tempted to pursue that. But I’m really passionate about dance. I believe there’s something really rich in continuing to explore things through the body. Whether that’s tech-involved or straight-up dance-involved, it doesn’t matter. The two aren’t so dissimilar.”

Get more from this week’s Fall Stage Preview here.