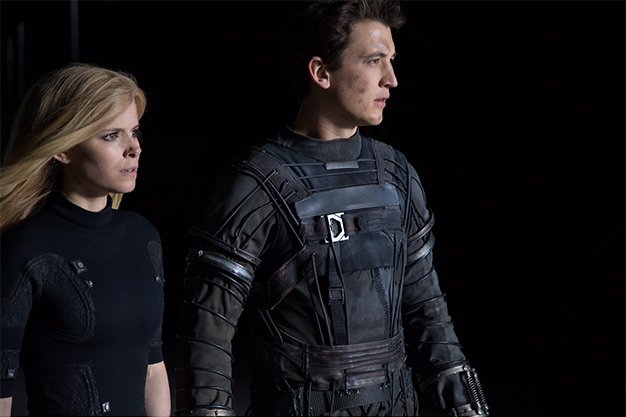 with the team positioned for a proper adventure next time around

The Fantastic Four, Marvel’s first superhero team, has proven very difficult to launch as a movie franchise. That’s because they are inherently silly characters – a stretchy genius, his vanishing wife, her brother the human torch and their friend the rock-man – and they’re out of step with the new, realist treatment currently in vogue for superheroes.

Previous attempts have been clunky. Roger Corman’s cheap-ass foam-rubber production in the early 90s was made solely so his New Concorde studio could hang onto the property for a few more years – the same strategy, oddly enough, that brings us to this latest reboot of the franchise from 20th Century Fox after two considerably more ambitious features in 2005 and 2007.

Those movies were more expensive than Corman’s – and actually played in theatres! – but other than Chris Evans’s gleeful smartassery as the Human Torch, there wasn’t much about them that worked. So I can understand why Fox, intent on holding onto as many Marvel characters as possible, would hand the Four to a wild talent like Josh Trank, especially after his knockout first feature, Chronicle. A fresh director meant a fresh start.

And say what you will about Trank’s F4, but it’s unquestionably his vision. A darker, body-horror-driven vision that puts Marvel’s “Ultimates” version of the characters – Younger! Sexier! Angstier! – through Cronenbergian contortions, unravelling the mythology of our heroes and their greatest adversary to knit them back together in a new form.

Reed Richards (Whiplash’s Miles Teller) and Ben Grimm (Jamie Bell) are Long Island teens whose science-fair teleportation project brings them to the notice of Franklin Storm (The Wire’s Reg E. Cathey), an expert in the field who introduces them to his daughter Sue (Kate Mara) and some arrogant douche named Victor Von Doom (Toby Kebbell). Franklin’s rebellious son Johnny (Michael B. Jordan) also ends up working on the trans-dimensional project, and accompanies Reed, Ben and Victor into another dimension during a drunken flight test – which finds three of the four flung back home with new, weird powers, and exposes Sue to the same radiation.

If you’re already saying “Wait, what?,” you’re not alone. But I was willing to go along with this radical reinterpretation of the Fantastic Four’s very simple origin story, provided Trank and his co-writers Simon Kinberg and Jeremy Slater took it somewhere interesting.

The thing is, they don’t. They just shuffle the characters around at different levels of anger and confusion until one of the producers realizes that almost nothing has happened for an hour and a quarter, and the genre demands a super-fight. And then the movie lurches clumsily into its final movement, a great big pointless Earth-in-the-balance conflict that barely has time to register before it’s resolved.

Fantastic Four manages to tell a story about its characters without ever once feeling like it’s derived from a comic book. This wouldn’t necessarily be a bad thing. Christopher Nolan’s Batman movies are very much their own entity. But where Nolan found a way to introduce Bruce Wayne into our world, Trank doesn’t do anything of the sort. His movie uses the iconography of the Fantastic Four comics in its establishing movement, and then abandons it for bland, undeveloped settings that contain bland, undeveloped characters. (Why show us the Baxter Building, then abandon it entirely?)

Worse, Trank’s movie takes everything that works about its property – the cranky-but-unbreakable family dynamic, the gee-whiz sci-fi spectacle, the complicated mixture of joy and sorrow that balances the team’s transformations and even Doctor Doom’s plosive purple pomposity – and shelves it in favour of simplistic characterizations and an underwhelming visual design. The whole movie looks like granite except, ironically, for its rock-man: the digitally realized Thing looks very convincingly like a moving, talking pile of orange rocks, and not at all like, say, Michael Chiklis in a bodysuit.

The actors do the best with what they’re given, which means that Teller puts a nicely oblivious spin on brainy Reed, Jordan grounds Johnny’s temper in a rebellious streak and Mara gives Sue a more independent personality than the character has previously been allowed. (She likes Portishead now.) And Kebbell makes a decent Von Doom, though he – like Jamie Bell – ultimately winds up voicing a less interesting CG version of himself.

The best thing I can say about this version of Fantastic Four is that it ends up in a kinda-sorta interesting place, with the team positioned for a proper adventure next time around. It would have been nice if they’d had one this time.