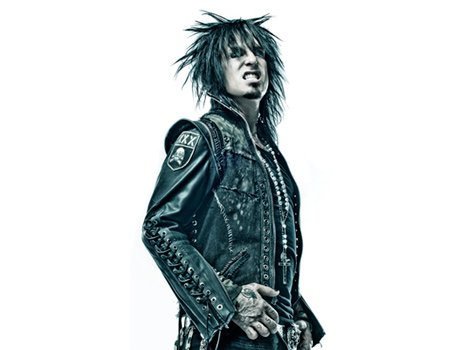 Like Oprah Winfrey, Nikki Sixx has always had the gift of gab. Back in his drug-addled 80s heyday, he tended to dominate interviews with the band that made him famous, Mötley Crüe, throwing out rebellious one-liners with a sneer, along with at least one ridiculous metaphor. “Mötley Crüe is like a giant, ugly spider on your bathroom wall that you just can’t get rid of….”

At his CMW Celebrity Interview today (Thursday, March 10) in the Fairmont Royal York Hotel, the 52-year-old L.A. bassist came off as humble and thoughtful, with strong opinions on everything from Facebook and YouTube to beauty and mortality to creativity and the dying art of 70s glam-rock fashion. The focus, though, was on his new book, This Is Gonna Hurt: Music, Photography And Life Through The Distorted Lens Of Nikki Sixx.

He wrote This Is Gonna Hurt without the help of a ghost writer, a point of obvious pride.

“It’s a lot of work to write a book,” he said emphatically, citing the Beat poets, particularly Jack Kerouac, as inspiration. “I have so much more respect for writers now. The book has a tempo. It rambles, but in time to itself.”

Words are everything to Sixx. As the chief lyricist for Mötley Crüe, he got a laugh when he recalled singer Vince Neil complaining about Shout At The Devil, the band’s 1983 single from the eponymous album. “He said, ‘Why are there so many fucking words in this song?’ and I said, ‘Because I got so much to say.'”

While his first few answers were lengthy and circular (the interview took place before noon, after all), the pace quickened midway through, when the interview moved into lighter topics like motorcycles, skydiving and whether Sixx still feels that “women equal trouble,” something he stated in his first book, The Heroin Diaries. (Sixx deftly deflected that question.)

And though Sixx, his wild black mane partially subdued by a bandana, didn’t indulge in his rants of yore, he wasn’t afraid to hate on “bands that don’t look like bands.”

“I just want to inspire young bands to write better songs… and maybe buy hair products. I’m sick of looking at bands that don’t scare me. Boring bands with nothing to say. I’m not seeing any new Metallicas or Guns N’ Roses or Rolling Stones. Where is the new Steven Tyler?

“In the 70s, people had style and flair. Fashion and music went together. Bands had passion, songs and could put on a show. Now sometimes [plain-clothes] people will come up to me in a club and shake my hand and then I look and all of a sudden they’re on stage. And here I was thinking they were the roadie.”

The young crowd murmured and stirred. “Are you playing Toronto?” someone shouted.

Sixx’s answer, which, naturally, lasted several minutes, seemed to indicate that Mötley Crüe were bypassing Toronto this time around. A quick peek at Ticketmaster, however, reveals a Molson Amphitheatre show on June 28. Pre-sale starts tomorrow (Friday, March 11) at 10 am.