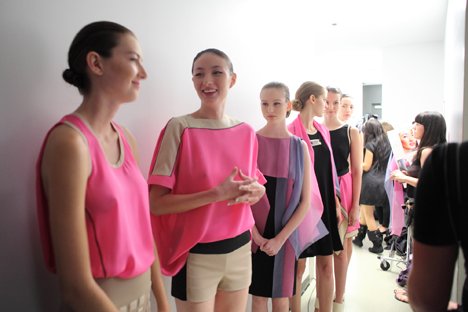 The new Start Up program launched by the Fashion Design Council of Canada, LG Fashion Week producer IMG and Mercedes-Benz was met with a healthy dose of cynicism when it was announced last June.

Despite its best intentions to nurture new fashion labels across the country, the lack of a financial award attached to the competition’s grand prize made the whole deal seem out of touch with the harshest reality of building a fashion business in Canada: seed money is scarce.

But that didn’t stop emerging designers from entering and five labels, including Cassie, Triarchy, Travis Taddeo, UNTTLD and MARTIN LIM, from arriving in Toronto over the weekend to prep for this evening’s finale show at the tents.

“Cash would be great,” says Pao Lim, who co-designs the Montreal-based MARTIN LIM line with his wife Danielle Martin. “But this isn’t a student contest. It’s a professional competition and we’re all supposed to already be in business with a plan for growing our companies.”

The couple says the mentorship aspect of the program has already been invaluable and its buzz is making it easier to get appointments with Toronto buyers and direct customers to UPC Boutique in Yorkville where their fall collection is available.

As for Spring, Toronto’s fashion press got a sneak peek at one of the season’s standout looks in late September when Montreal editor Lolitta Dandoy showed up at the White Cashmere Collection show in a white, pink and graphite striped shift dress with a cape detail on its back. The twelve exits they’re showing tonight share its graphic look. Many pieces are made out of multiple square fabric panels finely serged in black thread.

“We wanted them to look like a sketch,” says Martin describing the dark edging detail. “We wanted to show an optimistic collection for spring.”