We have 400 per cent more clothing a year than we had in our closets back in 1980, and companies are churning out a dozen “seasons’” worth of clothing trends a year. 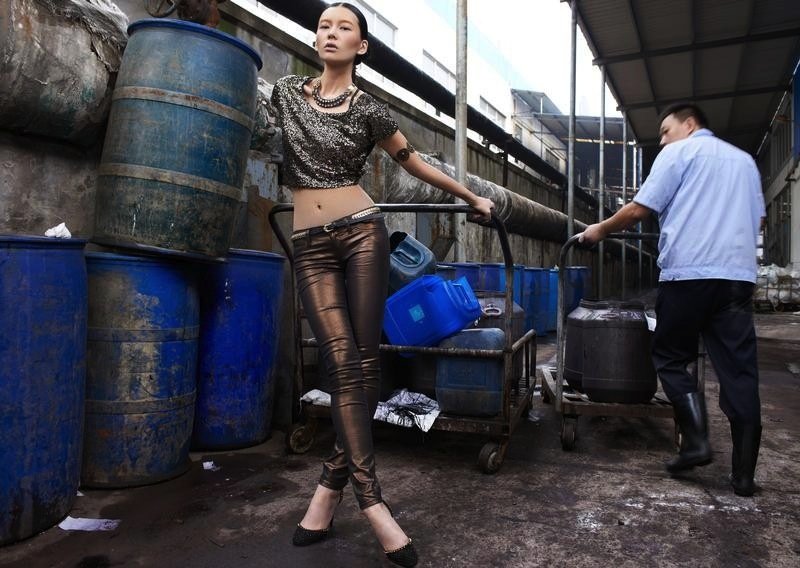 The sign tells shoppers that the fast fashion chain wants your old clothes – including odd socks and that dress with a hole in it – as well as home textiles, to give them a “second life.” Across town, Levis and Patagonia now have similar bins in-store beckoning us to give them our tired, our poor, our masses of forlorn and threadbare clothes to extend their lives beyond landfill. The industry, it seems, is trying to save us from itself.

This is, after all, a sector that’s making record-breaking profits selling us 400 per cent more clothing a year than we had in our closets back in 1980, churning out a dozen “seasons’” worth of clothing trends a year.

It’s easy to dismiss these recycling efforts as greenwash, but sustainable fashion champs say they’re a sign that the $250-billion-a-year global apparel industry is at least starting to take ownership of its ever-expanding landfill-clogging footprint.

At last week’s World Ethical Apparel Roundtable (WEAR) at the Metro Toronto Convention Centre, brands big and small gathered for not one, but four panels and a full day of labs dedicated to sorting out the growing problem of textile waste.

It’s an issue whose impact is becoming harder to ignore.

The world now buys 80 billion new items of clothing every year, cramming our closets with increasingly discardable tops and trousers, an estimated 85 per cent of which end up in landfill, including 13 million tonnes a year trashed south of the border alone, according to the U.S. EPA. Canadians throw out somewhat less per household (about 15 kilograms per household per year in Toronto), but either way a growing number of Canadian jurisdictions are through with giving our clothes free room at municipal landfills.

Markham is the first jurisdiction in Ontario to ban all manner of textiles – clothes, sheets, towels, curtains, shoes – from trash bags starting next spring. Residents are being asked instead to drop them off at new city-run street-side collection bins rolled out last month. Anything collected will be donated to the Salvation Army and the Canadian Diabetes Association.

Markham waste manager Claudia Marsales tells NOW, “We noticed when we went to clear bags [for garbage collection] that they were full of textiles. So we knew there was a problem.”

Vancouver and the province of Nova Scotia are mulling their own bans (Colchester County, NS now accepts textiles in its blue bins). Ontario recently added textiles to its list of waste streams that may potentially be slated for extended producer responsibility (EPR) regs, which would mean brand owners and manufacturers would have to take responsibility for (namely, pay to recycle) the waste they crank out.

The thing is, says Jo-Anne St. Godard of the Recycling Council of Ontario, we don’t yet have recycling technologies to separate and process the hodgepodge of today’s stretchy blended fibres en masse.

Having said that, she adds that “we’ve seen other waste streams where we said that 30 years ago.” Case in point, most tires used to get shipped south of the border for burning until EPR regs helped spark a local tire recycling industry.

In the absence of government intervention, Drennan argues that the fashion biz is “the first example of industry getting ahead of policy.”

Lots of brands are no doubt making sure factory floor scraps are recycled, but she notes that few big players, besides H&M, Levi and Patagonia, are taking on trickier post-consumer recycling. H&M says it’s so far collected 12,000 tonnes of textiles globally. The stuff that’s in decent condition gets sold to the thrift market, with profits going to the nonprofit H&M foundation (which, in part, funds textile recycling innovation)

H&M’s sustainability expert, Hendrik Alpen, says there is a business case to be made for big brands to recycle old clothing fibres into new clothing, but he admits that only “about 0.1 per cent” of fabric H&M uses is currently post-consumer recycled material.

Unlike the empty tin can or old newspaper in your blue bin, clothes don’t for the most part get ground up and recycled anew. The hierarchy of the 3Rs would certainly encourage reuse – finding an old sweater or jeans a new home, without the energy and/or vat of chems involved in transforming them into newly recy-cled fibres.

The trouble with reuse? Many of those clothes and fabrics end up being dumped in developing countries.

Value Village’s VP of recycling, Tony Shumpert, says North America’s largest thrift company collects 650 million pounds of clothes a year. Roughly 50 per cent of it is in good enough condition to put on the retail floor, but only half of that sells. Most of the leftovers get shipped to Paki-stan, India, Dubai and Central America, where it’s separated and “distributed across reuse channels around the globe.”

“There are a lot of positives” being generated by the global reuse sector in clothing, says Amelia Ufford,  founder of Vancouver-based debrand, which recycles defective merchandise and such from names like Aritzia, Lululemon and Columbia into stuff like sound and furniture padding. “Clothing gets reused, local and foreign jobs [are created], charitable partners [get funds from collecting], emerging markets get access to inexpensive clothes, [and reuse] creates a sorting and distribution industry.” Even torn and stained clothes and old underwear are now being accepted by H&M, Value Village and others, then shipped overseas for potential recycling into stuff like rags and insulation.

But the world can absorb only so much second-hand clothing.

Ufford notes that the second-hand sector has gotten flak for flooding the markets of developing countries and undermining local clothing industries with our castoffs. Now East Africa wants to bring in a ban on second hand apparel imports.

The Textile Recycling Association argues that used clothing imports are being wrongly blamed.

Agree with them or not, at this point the second hand sector is the only industry significantly taking on the vast volumes of clothing being churned out by fast fashion. Of course, if more major fashion chains started designing for durability and zero waste, the way some indy brands are doing, we wouldn’t have so many tattered discards flooding landfill to begin with. In the meantime, buy less, buy quality and mend more.