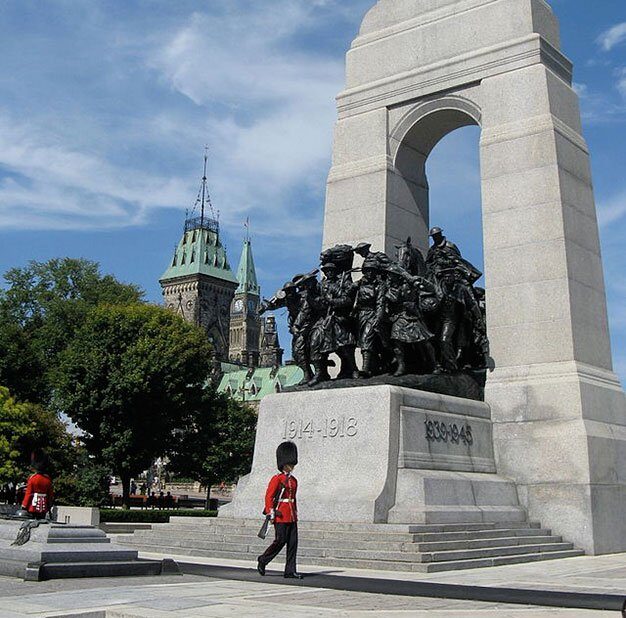 Despite Prime Minister Stephen Harper’s brave words (after the fact) about not being intimidated by terrorism, Canada did not stand strong and proud during the recent shooting incident on Parliament Hill.

Media-​fuelled fears caused widespread panic, including the ridiculous instruction for military personnel to cease wearing uniforms outside their workplace.

With confusion and panic mounting, the incident in Ottawa caught the attention of the international media, which reported that Ottawa was under siege by terrorists.

When the dust settled, it became evident that a violent, brief incident had occurred. Despite all the hand-wringing and brow-​beating about the failure of intelligence services, the security apparatus on Parliament Hill worked. What did not work were the channels of official information, and the resulting vacuum was filled by the rumours and hearsay of social media.

If a lone, crazed gunman with an antiquated rifle can cause us to lockdown government, shut military bases and cancel hockey games, what’s going to happen if we face a real and sophisticated terror attack like the one that occurred on September 11, 2001?

Ever since 9/11, security officials have warned Canadians that our nation is at risk of terror attacks. In fact, Canadian intelligence agencies and police services have thwarted numerous plots before these would-​be terrorists could carry out their alleged attacks.

The stated objectives in these failed homegrown terror schemes are astounding.

In 2006, the infamous “Toronto 18” wanted to blow up the CN Tower and the Toronto Stock Exchange, attack Parliament Hill and, for their coup de grâce, behead Prime Minister Stephen Harper during a live TV broadcast of Peter Mansbridge’s nightly CBC news show (although one among them thought Paul Martin was PM). In April 2013, a pair of alleged terrorists were arrested for plotting to derail a VIA train.

The terrifying scenarios they’d hoped to unleash never materialized, since the proper authorities apprehended the plotters before any harm came to Canadians. Even during Canada’s arduous 12-​year deployment in Afghanistan to battle Taliban extremists, no actual Islamic-​inspired attacks occurred on Canadian soil.

This changed on the morning of October 20, when Martin Couture-​Rouleau deliberately drove his car into two Canadian soldiers at a shopping mall just outside the military training base in Saint-​Jean-​sur-​Richelieu, Quebec.

Couture-​Rouleau was well known to law enforcement for his stated intention of joining ISIS fighters in Syria. Authorities had briefly arrested him when he tried to board a flight bound for Turkey in August, and since then had placed him under what the RCMP termed “aggressive monitoring.”

Couture-​Rouleau’s deliberate attack left Warrant Officer Vincent Patrice dead. A second soldier suffered minor injuries. After fleeing the scene, Couture-​Rouleau was involved in a high-​speed chase with police. After his car rolled into a ditch, he emerged from the overturned vehicle armed with a knife and was subsequently shot and killed by police.

News of this attack stunned Canadians. Sure, we have been warned that ISIS is targeting Canadians -– the group’s own propaganda videos claimed we should fear ISIS “in our own bedrooms.” Now, for the first time, a Canadian was killed by a deranged individual who was not an ISIS member but an ISIS wannabe. The effect on the public has been sobering.

The reverberations of Couture-​Rouleau’s attack were still the lead media story two days later, when Michael Zehaf-​Bibeau shot and killed Corporal Nathan Cirillo as he stood on guard at the National War Memorial in Ottawa.

In full view of dozens of bystanders, Zehaf-​Bibeau fired two rounds from his Winchester .30-​30 lever-​action hunting rifle into Cirillo’s back at point-​blank range. As the mortally wounded Cirillo fell to the pavement, Zehaf-​Bibeau made a mad dash toward the Centre Block entrance of Parliament Hill.

Abandoning his own vehicle when he encountered the Parliament Hill barricades in place to deny unauthorized entry, Zehaf-​Bibeau carjacked another vehicle. Forcing the terrified driver to flee the car at gunpoint, Zehaf-​Bibeau then drove himself to the bottom of the main staircase at Centre Block. After a brief scuffle and exchange of gunfire at the entrance, he raced blindly down the corridor leading to the Library of Parliament.

It’s not clear what motivated him or if he knew where he was going. RCMP Commissioner Bob Paulson claims police have a video containing evidence that the shooting was politically motivated. A letter from Zehaf-​Bibeau’s mother published in Post-media, however, suggests her son suffered from drug addiction and was angered by the government’s decision not to grant him a passport to fly to Saudi Arabia.

What is clearer is that Zehaf-​Bibeau did not have any master plan or conscious objective other than to cause mayhem. Chased and cornered by a score of alert security guards and police, the 30-​something “lone  ​wolf” was hit by a heavy fusillade of gunfire before Sergeant-​at-​Arms Kevin Vickers finished him off.

A mere 83 seconds elapsed from the time Zehaf-​Bibeau shot Cirillo until he was himself killed. In short, a lifetime criminal and drug addict, acting alone, committed a senseless murder of an essentially unarmed soldier and then ended his own mental torment in a suicidal charge into one of the thickest concentrations of armed law enforcement officers in Canada.

But by achieving his death-​by-​cop, he unknowingly set in motion a drama of such magnitude that some newscasters proclaimed it forever life-changing.

What ignited the fear storm were a number of fictitious statements from eyewitnesses that suggested Zehaf-​Bibeau was not acting alone. As media outlets immediately switched to live coverage of the event, the absence of any verifiable information meant that reporters began to simply repeat information being circulated on social media.

The Parliamentarians and staffers inside Centre Block at the time of the attack had heard an echoing hail of gunfire and presumed that such a volume of fire meant the attackers were numerous and armed with machine guns. This information was then tweeted and, of course, repeated, since the sources were transmitting from ground zero. All government offices went into lockdown mode, and all residents in the nation’s capital tuned in to follow what seemed to be a multi-​pronged, orchestrated attack.

Shortly after the initial shooting, it was reported that a victim had been shot in the Rideau Centre, a three-​storey shopping mall located just 600 metres from Centre Block. The mall was then evacuated amid a flurry of denials from administrators at the Rideau Centre.

Social media reports of a high-​speed police chase along the major highway that bisects Ottawa also proved false, but not before causing schools across the city to lock down frightened students. The bridges over the Ottawa River and Rideau Canal were closed until police could establish checkpoints, and flights were closely monitored at Ottawa International Airport as police searched for Zehaf-​Bibeau’s non-​existent accomplices.