But there's no mention of tougher tar sands regs. News flash: enviro groups are not impressed. 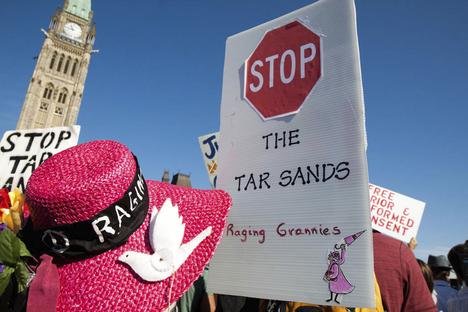 Enviro minister Leona Aglukkaq announced “ambitious” targets to cut greenhouse gases by 30 per cent below 2005 levels by 2030 on Friday, May 15.

“This is a fair and ambitious target that is in line with other major industrialized countries and reflects our national circumstances, including Canada’s position as a world leader in clean electricity generation,” according to an Environment Canada statement.

The statement goes on to say that in 2013, Canada’s GHG emissions were 3.1 per cent lower than 2005 levels while the economy grew 12.9 per cent over the same period. The government is framing the move as part of what it calls a “sector-by-sector” approach to meet its international climate change commitments.

Canada says it’s going to play ball and align itself with proposed US methane regs for the oil and gas sector, as well as regs for natural gas-fired electricity and chemical producers and nitrogen fertilizers, but there’s no mention of tougher regs for the oil sands.

Considering Environment Canada projects Alberta’s tar sands will be responsible for 40 per cent of all greenhouse gases nationally by 2020, Pembina’s oil sands director Amin Asadollahi says Canada “simply can’t do it’s part globally on climate change without reigning in the growth of greenhouse gas pollution from the oilsands.”

Asadollahi adds that, “Given Canada’s history of setting climate targets while failing to implement regulations to meet them, today’s announcement doesn’t mean much without a credible plan of action to back it up.”

Environmental Defence’s Dale Marshall notes that Canada’s proposed 2030 target “is the equivalent of a 14 per cent decrease from 1990 levels, tied with Japan for the weakest in the G7.”

He says the government’s modest target would be disappointing “even if there was any likelihood the government would do anything to reach it [but] after nearly a decade in office, this government has made it crystal clear that it’s not interested in taking any action on climate change. There is a difference between saying things and doing things. Unfortunately, the federal government is only good at the former.”

South of the border, Oil Change International, a coalition battling TransCanada’s Keystone XL pipeline plans to ship bitumen from the tar sands to refineries on the Gulf Coast, also weighed in to describe the feds’ targets as “unimpressive.” The group says the Canadian government’s failure to to regulate the tar sands “add up to one more reason for U.S. President Obama to reject Keystone XL.”