Feminisms fourth wave is the shitlist

It was shocking but not surprising that women lining up in the Danforth Music Halls ladies room during the L7. 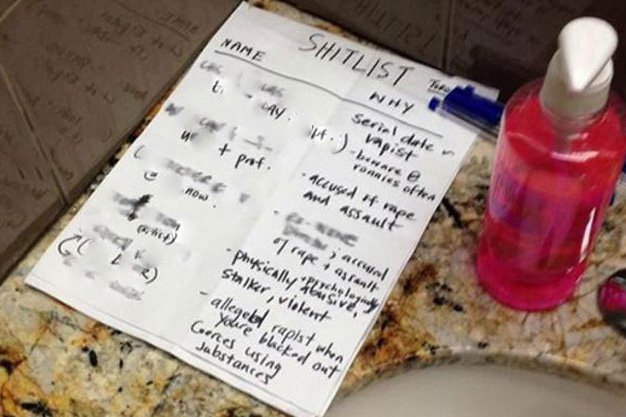 U of T rally to protest gender violence Monday

It was shocking but not surprising that women lining up in the Danforth Music Halls ladies room during the L7 show on September 6 found a shitlist scrawled with names of alleged rapists.

Thats because L7 is the female-fronted band that not only influenced the riot grrrl movement, but also wrote and performed the unforgiving Shitlist. The song rages over Juliette Lewiss kick-ass (and every other body part) diner scene in the 1994 psycho road-trip movie Natural Born Killers as she boots the sexist rednecks whove rubbed her the wrong way.

When I get mad and

I grab my pen and

Of all the people that

Youve made my shitlist

L7 fan Liv Lunde, who directs a co-working space for video game developers in Montreal, says the list, at least three pages long, attracted a crowd of women in the Music Hall washroom.

The thing is, women are still fighting to take their place and be heard.

Over the past few years, their most prominent platform has been social media, a digital fourth wave of feminism focused on sexual assault. Hashtag after hashtag from #gamergate to #rapeculture to #FHRIP has pushed gendered violence and abuse out of the shadows.

These are the 21st-century versions of Take Back The Night marches, but they get much more mainstream media attention.

In Canada, this was most plainly felt last fall when Jian Ghomeshi was fired after several women charged that he had brutally assaulted them. My hashtag #BeenRapedNeverReported, co-created with journalist Sue Montgomery in Montreal, went around the world and was translated into different languages. It had women and men recalling how theyd remained silent after being sexually assaulted because of shame, stigma, self-blame or simply because the charges would never go anywhere.

Which is why Rachelle, who prefers her last name not be used, to avoid online bullying, reacted as she did when she saw the shitlist at the concert. The Toronto artist instinctively snapped a photo of it, with the names, occupations and accusations plainly visible, and posted it on Instagram.

I thought I would like to make a digital version of this and have as many people as possible see it, she recalls. I wasnt worried about a lawsuit. Fear of having people in power telling you what youve done is wrong can really stifle your actions and behaviours.

I didnt write the list. I saw it in a public space. I have every right to share that and to talk about what it means.

Although theres no way to tell how many re-posts the photo got, it clearly had women talking. Which was the point of the list, a way for women to share the names of their alleged attackers and issue warnings to others.

Back in my day, we used indelible markers on bathroom stall walls. Once, in Corktown, I saw the words [So-and-so] is a roofie rapist spray-painted on a garage door.

But putting it online is taking it to a whole other level, as Lunde maintains: We do need to look out for each other and believe each other when somebody is brave enough to step up and talk about an incident. I dont think we should be brushing each other off. However, posting on social media a list with full names and occupations that could go anywhere at any time? Its brutal and it could destroy somebodys life. It could destroy families. It could destroy so many things.

I can understand that they may have done something that destroyed somebody elses life, but that may not be the right way to approach the situation. Im not saying I have the solution, but it could have a terrible negative effect if somebody is accused wrongly.

And yet some women feel its their only recourse.

Even in a situation where its black and white, when the situation is so obviously rape, people still get off or dont even get taken to court, explains Rachelle. So a lot of people are going to choose a different way of sharing their experiences and talking about them.

No wonder social media have been leading the news on stories related to gendered violence.

Just last week, word of death threats against women at the University of Toronto spread on Facebook after, deep in the comments section of a local blog, posts by somebody using the handle Kill Feminists were discovered.

On Monday, September 14, in response to the threats, a large protest against sexual violence blocked Bloor Street while politicians and activists made speeches.

The solution to gendered violence is not increased police presence and securitization, co-organizer Ellie Adekur said in a statement. The answer is community-building through collective action and education that promotes feminist ideals like gender equality in school, at work and at home.

But its been demonstrated repeatedly that change has to come from the grassroots, even when those grassroots are made up of clicks.

Mandi Gray, a PhD student at York University, found out the hard way when she tried to get help last winter after reporting a rape. Although her alleged attacker was charged, she says the school all but ignored her requests for protection for herself and sister students.

The digital space serves a very important purpose in having these conversations, she says. If it didnt exist, I wouldnt have met with so many women across the country in such a short time period, so in a lot of ways its been incredibly helpful. But in a lot of ways I disengage like from reading comments, because they can be hateful. They demonstrate that we havent really come that far in understanding sexual violence at even the most basic levels.