#FHRITP: an open letter to bros

Over the last couple of years, its become a trend for groups of men to shout Fuck her right in. 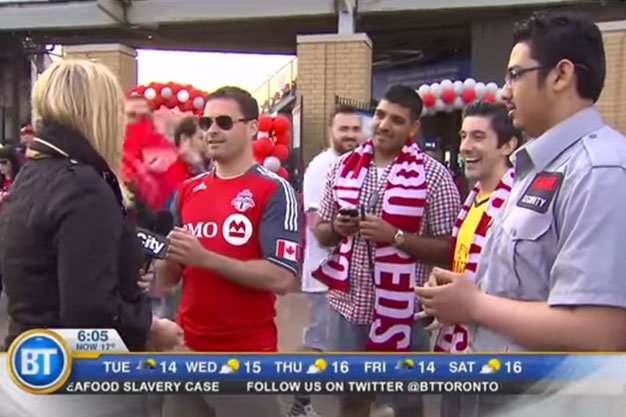 Over the last couple of years, its become a trend for groups of men to shout Fuck her right in the pussy! into the microphone or toward the camera when broadcast reporters are out in the field. The jokes caught on and #FHRITP is now a popular expression, hashtag and T-shirt slogan.

Bros (aka dude bros): incredibly insecure men. Key symptoms: overly jealous of their girlfriends, macho behaviours and laughably homophobic. Currently, there is no cure for being a dude bro.

Is Fuck her right in the pussy! merely an instructional tip for your pals?

I know. It isnt about that, is it, bros? Targeting mostly female reporters, often in sports and yelling Fuck her right in the pussy! is harassment, a rape threat, a symptom of rape culture, immature, disgusting and, for the reporter trying to do her job in front of her colleagues, other normals and sometimes children, humiliating.

Oh, whats that bros? #FHRITP is just a harmless joke?

@CityNews dont turn a prank into something its not. AKA harassment.

Well, Tim Buxbaum: a prank is something harmless, done among friends. Like, you know, when you and your high school besties would fall asleep at house parties and draw dicks on each others faces. Now, just imagine you ran around the city drawing dicks on your colleagues faces. That would qualify as harassment.

Harassment: A form of discrimination. It involves any unwanted physical or verbal behaviour that offends or humiliates you.

And then theres sexual harassment, bros. You know about it. That thing women should probably just learn to deal with because you think its funny. Shouting out Fuck her right in the pussy to a TV reporters audience is the actual definition of sexual harassment.

Sexual harassment: harassment (typically of a woman) in a workplace, or other professional or social situation, involving the making of unwanted sexual advances or obscene remarks.

Many of you bros are claiming that this is a violation of your freedom of speech. @CurtisCunning, a hockey-playing bro whose Twitter feed is full of misogynist gems such as grabbing your girls ass in public to claim your territory, had this to say: Im glad that living in a country with Freedom of Speech, that I have to watch what I say. #FHRITP.

But, bros, heres food for thought for your pea brains: Youre the only class of society that hasnt been socialized to fear for their safety or brace themselves for regular bouts of discrimination. You feel entitled to your fun, and fuck anyones pussy who gets in your way. Your level of entitlement has overshadowed your human decency. Shame on your mothers and fathers. Shame on your teachers. Shame on our culture for catering to your bro needs.

Historically, men, mostly white, killed, stole and raped their way to power. They made all the rules. This kind of engrained supremacy takes generations to diffuse.

You, bro, are the last remnant of that species, desperately clinging onto an era of superiority. You live in the present day, so, officially men and women are equal. But you also live in present day 2015, so you see lots of examples of lingering misogyny. You get to watch shows like Mad Men and listen to your dad and the older bro generation, and you long for the good old days when you just had to exist. Youre coming to the realization that in 2015, you might not get by in life just for being a bro.

But how do you take back that power? By making other people feel smaller than you. By disguising a threat in a joke, and reminding us that you and your bros could very well rape us if you wanted to. Its our fault for stepping on your bro-dominated sports turf, after all.

Empathy: the capacity to understand what another person is experiencing from within the other person’s frame of reference.

Did you know that some jokes are only funny for you because youve never had to be scared?

You bros who think we should be cool with you yelling about our pussies are the same ones who claim not to be homophobic, you just hate it when guys hit on you. First of all, bros, youve probably never been hit on by a gay person (in your dreams). But if youre saying that unwanted sexual attention makes you uncomfortable, then… Eureka! You might have a chance at this empathy thing.