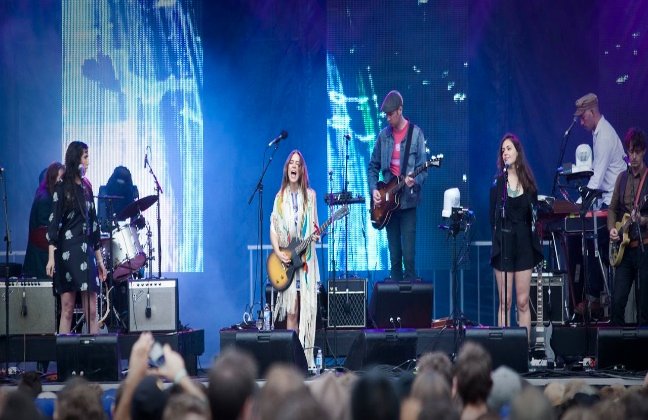 Torontonians complain a lot about venues. Sound Academy is far away. The ACC is too big. The sound is bad here and the sightlines terrible there. Saturday’s Field Trip festival proved that Fort York Garrison Common might be the city’s best place for a concert, combining green fields, heritage buildings and glimpses of city life between the trees – on the north side, a lush green wall on the south side, half-built condos and construction cranes punctuating the skyline.

It was an apt juxtaposition for a festival showcasing both the veteran and more recent additions to the Arts & Crafts label. Even Field Trip’s headliners embodied that natural vs. brand-new aesthetic. Feist and Broken Social Scene took radically differently approaches to their main-stage sets. The former put an electronic spin on her fan favourites, reconfiguring them until they were unrecognizable, while Broken Social Scene played their breakout album You Forgot It In People from start to finish.

Feist started with an eight-person band (including Snowblink and Charles Spearin of Do Make Say Think) and spirited performances of songs from her latest album, Metals. But the ensemble was quickly reduced to three – and that’s when the electronics kicked in. She looped her voice on My Moon My Man and swapped an acoustic guitar for a sampler on 1234. It surprised the crowd members looking for sing-a-longs, and at times seemed awkward and forced, as if Feist was trying to stay relevant in a music age where Grimes is the new It Girl.

On the other hand, Broken Social Scene’s performance of You Forgot It In People was spot-on and nostalgia-laden, reminding us why A&C became one of the country’s most important indie labels in the first place. Brendan Canning and Kevin Drew took turns at the mic, and Lisa Lobsinger, Amy Milan of Stars and Feist accompanied them throughout the night.

Other festival highlights included Cold Specks’ insane live singing voice – best showcased when her band would pause and she’d belt a cappella (how the London-dwelling Canadian manages to channel so much gospel and American-south soul is remarkable) Timber Timbre’s chilling performance (he sang, “All I need is some sunshine” while overcast skies threatened above), and Bloc Party playing hits from Silent Alarm as well as their newer, dancier songs.

Field Trip made the most of the day, supplementing their lineup with the best concert food – food trucks and independent vendors and mini versions of Toronto hot spots – multiple bars and even a hula-hoop lawn. The two stages were close to one another, making it easy to catch each of the 15 acts (if anyone had the stamina). A pretty great birthday party – hopefully we won’t wait another ten years.