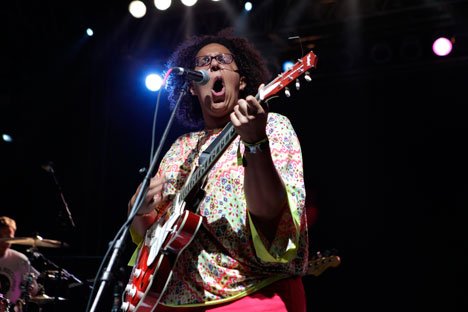 Field Trip started out as a relatively small label-focused summer music festival at Fork York and Garrison Common whose MO was to celebrate Arts & Crafts’ 10th anniversary. This year’s just-announced lineup reflects how much its grown and diversified in a brief couple of years, likely due in part to the sudden proliferation of Toronto summer fests.

We’ll get a double dose of raucous rock from the American South in headliners My Morning Jacket and Alabama Shakes, while rock of a more psychedelic nature comes via white-hot trend-setters The War on Drugs, super-fashionable Temples and Father John Misty (our current album of the week).

But Canadian musicians get represented, too. Dan Mangan + Blacksmith are sure to deliver an explosive set of textured art rock, Purity Ring will keep it fresh with new songs from their forthcoming Another Eternity album, busy Hamiltonians Arkells will keep the rock quotient high, as will actual Arts &Crafters Kevin Drew (with Andy Kim), Apostle of Hustle and new signees experimentalists Absolutely Free and Edmonton’s Calvin Love.