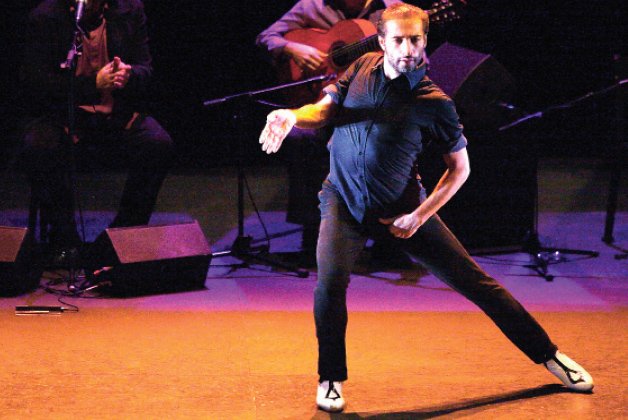 The persistent hot-button topic in the world of flamenco dance is authenticity. Who upholds the ancient traditions that began in 18th century southern Spain? Who is “pure”? Who is oldschool and who is new?

These days, nobody is pushing that button harder than Seville-born flamenco innovator Israel Galvan, whose extensive North American tour brings his La Edad De Oro to town for one night only.

On the phone between Ottawa and Vancouver shows, Galvan assures me through his translator that all the standard hallmarks of a traditional flamenco concert are present in La Edad De Oro: dance, guitar and song, each given equal weight.

It’s within this old-style framework that Galvan, who has impeccable credentials (he is the son of two flamenco dancers), is reinventing flamenco with choreography that soars in all directions from a base in traditional pasos and palos.

“Even if people think of me as a novelty sometimes,” Galvan says, “flamenco is the only thing I know. It is my instrument.”

Although his movement can seem stylized to the point of parody in more recent works like La Curva (in which he dances on flour) and Lo Real (an anguished group work about the Nazi genocide of the Roma people in which he battles a piano), Galvan is always virtuosic.

The 40-year-old sensation has a solid defence against critics in the community who find him irreverent.

“People who dance in the same way as those who danced in the tradition are, in fact, just copying. You cannot feel now what the old-time dancers felt when they danced. We are always evolving, and the time you live in affects what you are in this moment.

“I’m more interested in evolving my mind and body in my own time. That’s authentic.”

To be an artist living and working in the present is an idea that, for Galvan, gives added meaning to the show’s title. La Edad De Oro means “The Age Of Gold.” It refers to flamenco’s heyday and comments on the artist’s responsibility to look for his or her own personal golden age.

If rave reviews in The New York Times and New Yorker are any indication (he recently debuted La Curva at the Flamenco Festival there), Galvan is already representing a gilded era with breathtaking originality – and unswerving focus.

“It is more important for me to go on my own search and change things about the tradition if I need to,” he says. “If I want to be an artist, I cannot be a slave to the critics – even if they are good critics.”