FIGAROS WEDDING by Mozart, adapted and directed by Joel Ivany, musical direction by Christopher Mokrzewski (Against the Grain). At The. 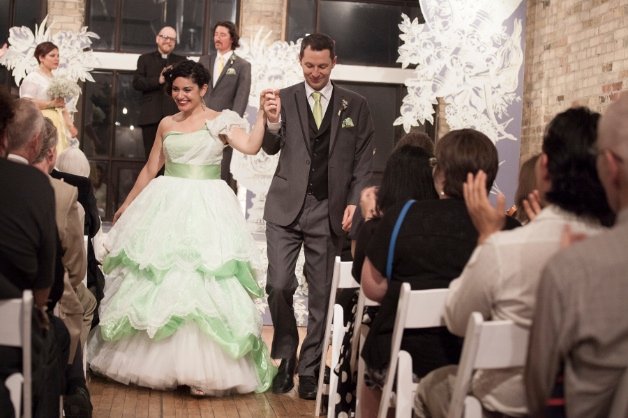 FIGAROS WEDDING by Mozart, adapted and directed by Joel Ivany, musical direction by Christopher Mokrzewski (Against the Grain). At The Burroughes. May 29 to June 2. Rating: NNNN

Against the Grain Theatre got the jump on traditional June nuptials with its sparkling production of Figaro’s Wedding, artistic director Joel Ivany’s updated, Toronto-focused English adaptation of Mozart’s The Marriage Of Figaro.

Set in The Burroughes, which is actually used for wedding receptions, the production turns Figaro (Stephen Hegedus), in the original the servant to Count Almaviva, into the long-time friend and employee of Alberto (Alexander Dobson), who, bored with his wife, Rosina (Lisa DiMaria), wants to fool around with Figaro’s fiancee, Susanna (Miriam Khalil). Since Alberto’s loaded and Figaro needs the money for the wedding, the finagling friend might be able to get what he wants.

Other characters have morphed, too. Cherubino (Teiya Kasahara) is no longer a boy sung by a woman but instead a dyke interested in Rosina. The others (played by Gregory Finney, Loralie Kirkpatrick and Michael Ciufo) become various wedding functionaries: event coordinator and manager, florist and minister.

The action, which includes a bachelorette party and wedding reception, moves from room to room, and the result is a lively production buoyed by the playing of the Music in the Barns Chamber Ensemble under music director and pianist Christopher Mokrzewski.

The performers are fine singer/actors, with Hegedus bringing a ringing voice and excellent diction to the jealous Figaro, the expressive Khalil a cooler-chugging, sometimes fiery, always enchanting Susanna, and DiMaria’s Rosina, Susanna’s best friend, singing with a creamy tone.

Kasahara shows us the comic and touching qualities of the young love-sick Cherubino awash in a city of attractive women. Though Dobson convinces us of Alberto’s oiliness from the start, he isn’t a real villain until the third act, when his anger and menace come into focus.

Under director Ivany, the characters play in and at times with the audience, who are guests at the wedding. His libretto, which blends text-messaging, Ontario Place, Craigslist and smartphone cameras into the original plot, is almost always clever, especially when the last act’s arias turn into speeches at the reception. The only sour note is a joke with a racist ring.