NOW MagazineNewsFight for $15 and fairness

Fight for $15 and fairness

Activists at rally calling for $15 minimum wage say provincial review of workplace rights presents "a golden opportunity" to replicate successes in the U.S. 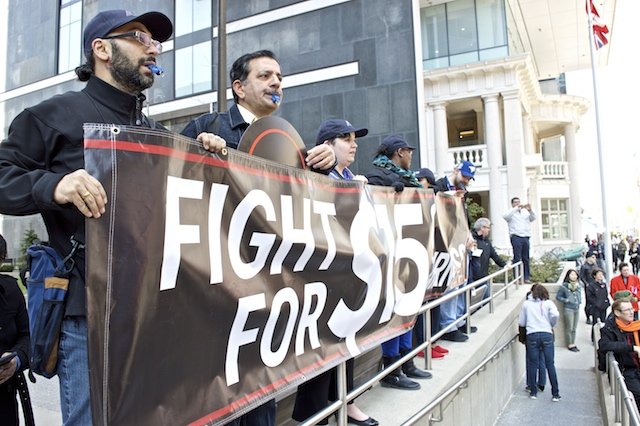 Ken Nebone sits watching the crowd. He looks more exasperated than incensed, unlike his fired-up counterparts waving placards and chanting slogans at the Fight for $15 rally outside the offices of Ministry of Labour Friday, April 15. The rally was one of several in communities across the province.

The furor might amount to catharsis for Toronto’s growing underclass of burned-out workers, but Nebone has been around long enough to content himself with watching from the sidelines.

“My whole life was spent working for low wages,” he says over the din. He’s laboured in the post office and the navy, “A jack of all trades, but master of none,” as he puts it. Nebone once harboured dreams of becoming an ambulance driver, but “wasn’t good enough of a driver,” he chuckles. He settled for a stint as an orderly instead.

Yet despite his near-constant employment, Nebone, like others at this rally, has struggled much of his life.

“I don’t ever remember getting severance pay,” he says, after losing jobs. “If I did get it, they’d deduct it from my employment insurance. So I’d never see it.”

Uncertainty of income led Nebone to join the Ontario Coalition Against Poverty nearly 30 years ago. He’s here today to continue the fight he started in the 1980s. “The solution to poverty lies in decent work,” he says.

The 300 or so here today would agree. Most of them work part-time with no sick days or health or dental benefits. The current minimum wage will earn a full time worker $1800 a month, but an average two-bedroom apartment in this city costs 70 per cent of that, leaving little for healthy food or warm clothes. Behold, the “precariat,” a segment of the population bound to an ever-shifting carousel of gigs with uncertain hours and unnerving occupational insecurity. What we’re witnessing, according to some academics, is the emergence of another under class.

The Canadian Centre for Policy Alternatives reports a leap in minimum and low-wage workers in the past two decades. Of those making the minimum, six in 10 work unpredictable hours that shift from week to week. There’s also been a sharp drop in full-time positions, meaning more workers are forced to accept precarious working conditions as the norm.

Stories of struggle abound at Friday’s rally: Shauna Dickson was hired through a government program and employed only until her subsidy ran out her mother, Laurie Fisher, says she was fired from her job after requesting to extend her maternity leave by one week Abdul, an airport worker, saw 90 per cent of his co-workers laid off and replacements hired for lower wages.

“These labour laws were created 60 years ago, and we need an update,” says Stephanie Nakitsas, who teamed up with former NDP MP Andrew Cash to launch the Urban Worker Project last month. The initiative is pushing for increased legislative support to freelance and contract workers.

“Once upon a time, there existed government-run infrastructure to match people to jobs,” says Pam Frache, an organizer with the Workers’ Action Centre. “It used to be a publicly provided service,” she says. Now, temp agencies make a middleman’s profit at the worker’s expense.

Minimum wage hasn’t kept up with the rising cost of living, frozen 12 of the last 20 years, and although the current government of Kathleen Wynne tied minimum wage to the province’s Consumer Price Index in 2014, the minimum is set to rise only fifteen cents this year.

Frache knocks down objections that businesses will pass on the cost of wage increases to consumers and drive up the cost of living.

A 2011 study by the University of California, Berkeley, found that paying Wal-Mart employees $5 above the minimum in the U.S., would increase prices by 1.1 per cent, even if all costs of the increase were passed on to the consumer.

Last March, Ontario appointed advisors to conduct the Changing Workplaces Review. The final report, due later this year, will recommend amendments to the Employment Standards and Labour Relations acts. Frache sees this as a “golden opportunity” to replicate successes Stateside. In San Francisco, service employees banded together to push for the Retail Workers Bill of Rights to protects workers from unpredictable scheduling, giving them a chance to juggle multiple jobs. The year before, airport workers in Seattle won paid sick days as well as a $15 minimum wage.

Rather than fudging the economic balance, Frache says that workers with cash to spare tend to spend more.

“All the horror stories we’ve been fed they just haven’t panned out.”