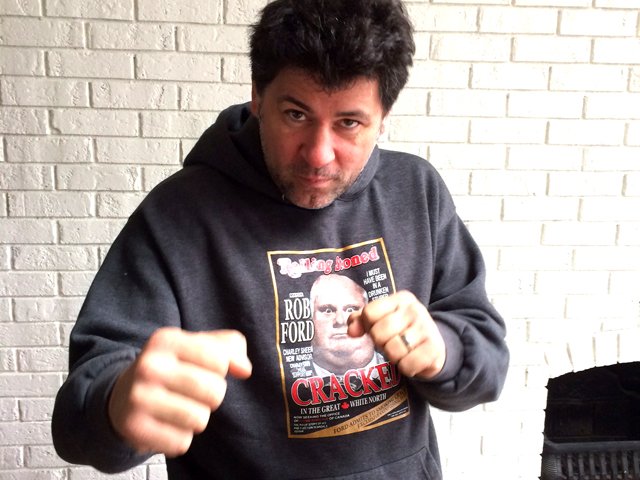 Does a day go by that Rob Ford doesn’t say something that makes somebody want to knock his block off – if only metaphorically?

“He called us dumb fucking w-ps and d-gos,” says a clearly perturbed Grosso. “That guy’s a fucking jerk-off!”

And so, the former amateur featherweight has challenged Ford to a boxing match. Not only does Grosso already have the gloves, he’s also got the ring, since the El Mo holds regular wrestling matches. All money raised will go to the fund he started five years ago in support of Sick Kids Hospital’s juvenile diabetes clinic.

“I’m not just doing this for Italians. I’m doing it for the gay and lesbian community, for women, for every person in Toronto who’s fucking fed up with this fucking guy!”

The mayor’s office has yet to respond to NOW’s request for comment, but Chuvalo’s camp has expressed interest.

“We’re friends of Sam, but then we’re helping Rob in his campaign (too),” says Chuvalo rep Tom Doyle. Doyle was recently photographed with Chuvalo having a non-alcoholic dinner at Barberian’s steakhouse on Elm Street with Ford and Marvin “The Weasel” Elkind, former Jimmy Hoffa associate and current anti-drug crusader.

“Boxing Ontario would have to be involved with judges and doctors and we’d have to get a neutral referee,” offered Doyle. “George and myself would train Rob and be in his corner fight day. I see a knock out [for Rob] and Grosso down for the count.”

“Robbie’s going to need Dr. Phil and Dr. Oz when I’m done with him,” says Grosso. “I’m going to lay a beating on him so hard, he’s going to wish he never left his sister’s basement!”