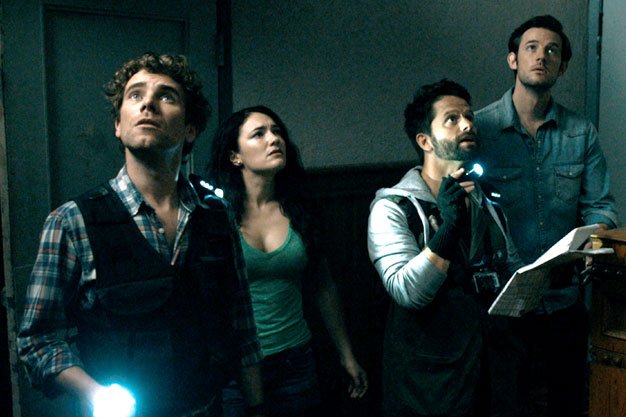 Bad things happen in a high-rise to a team of paranormal investigators in Farhope Tower.

Last weekend’s chill signalled that the Blood In The Snow Film Festival was about to return to the Carlton Cinemas, taking over the theatre for a weekend of homegrown horror.

I was pleasantly surprised by the fest’s opener, Farhope Tower (Friday, 7 pm), in which something nasty awaits a TV crew of paranormal investigators in a creepy high-rise.

It’s the first venture into horror by Niagara Falls filmmakers April Mullen and Tim Doiron (Gravytrain, Dead Before Dawn, 88), and while I haven’t had much patience with their work in the past, it turns out this genre suits them really well. Look for Lauren Collins underplaying nicely and Orphan Black’s Ari Millen overplaying wildly, both to decent effect.

I feel a lot less enthusiastic about Ryan M. Andrews’s Save Yourself (Saturday, 9:30 pm Sunday, 7:30 pm), about a quintet of female horror filmmakers waylaid in a creepy farmhouse by a madman. The concept has a certain grindhouse purity, but the execution just isn’t there.

But then there’s She Who Must Burn (Sunday, 2 pm), a psychological thriller from veteran director Larry Kent (The Bitter Ash, The Hamster Cage) chronicling the ordeal of a small-town Planned Parenthood counsellor (Sarah Smyth, who’s also at the festival in the survival thriller White Raven, Sunday, 4 pm) targeted by religious fanatics. It’s distressingly credible and utterly without mercy – just like horror ought to be.

Bundle up. And brace yourself.