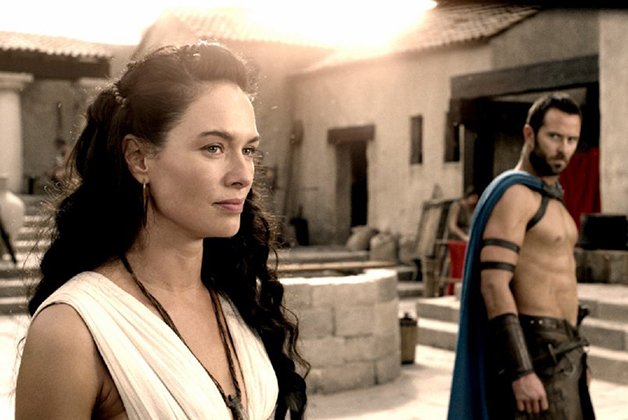 Bettie Page Reveals All (Mark Mori) tells the story of the pin-up model who was a seven-year sensation in the 50s as one of the first females to strip for the camera. Director Mori uses interviews with the 70-year-old icon as voice-over for clips and pics. Photographers and admirers paint a portrait of someone who loved her work – until she gave it up and disappeared. The film gets off to a rocky start claiming Page was a true original there’s not much innovation in the images she created. Page herself was something else, however: open, fun-loving, creative and weirdly wholesome. As a child she was sexually abused after leaving the business she found Jesus, later struggled with mental illness and was hospitalized for 10 years. Too bad Mori has no visuals of the older Page. But watch carefully and there’s a ton of fascinating detail, including admissions about the not-so-nice aspects of modelling. In her later years, Page had no agenda – and no internal editor. 101 min.

Like Father, Like Son (Hirokazu Kore-eda) is a languid domestic drama focusing on a successful Tokyo architect (Masaharu Fukuyama) and his wife (Machiko Ono) who learn that their six-year-old son was switched at birth. As they try to figure out the best possible resolution to the dilemma with the couple now parenting their biological child (Lily Franky, Yoko Maki), the impossibility of a perfect solution gives Kore-eda’s movie its structure – concerned, dense with possibility, a little nervous about how to move forward. It ultimately pays off in a series of lovely, understated scenes, but getting there is a little rougher than it ought to be. Subtitled. 120 min.

Particle Fever (Mark Levinson) chronicles the buildup to the maiden operation of CERN’s Large Hadron Collider and the long-belated validation of the now 50-year-old Higgs boson theory. This pop science doc is smart and commendably accessible, but it works too hard to milk suspense from the scientists’ anticipation anxiety. The stakes are clearly enormous, but director Levinson’s manner of convincing us of this leans heavily on strained doc drama conventions. The math involved in determining whether data gathered from the LHC favours supersymmetry or multiverse theories will mean more to experts than laymen, but Particle Fever effectively generates appreciation for the tenacity and vision of scientists and the power of dogged curiosity to determine an entire life’s path. 99 min.

Alan Partridge (Declan Lowney) is the culmination of 20 years of work by Steve Coogan as the character of Partridge, a blowhard sportscaster who briefly became a chat-show host and now brays his inanities as a DJ at Radio Norwich. Coogan and his collaborators have rightly concluded that spending 90 minutes with Partridge on a good day would be an extremely unpleasant affair, so they’ve put him in a siege picture – a very clever notion, because he’s the last person with whom you’d want to be trapped in a room. It doesn’t quite work as well as it should, though. Lowney’s direction is too pedestrian for the material, embracing neither the action clichés nor the absurdity of seeing Partridge Die Harding his way through his radio station. Coogan holds it together, utterly debasing himself and getting laughs out of the smallest gulps and shifts in posture. It’s a great performance in service of a horrible character, deserving of a better film. 90 min.

No Clue (Carl Bessai) is a mashup of murder mystery and comedy starring Corner Gas’s Brent Butt as a Vancouver salesman who pretends to be a detective to help out a damsel in distress (Amy Smart). The convoluted plot seems drawn from any number of TV dramas, and there’s little suspense and few laughs, although Butt and David Koechner (as his slacker buddy) have a great rapport. I’d rather sit through 90 minutes of them riffing. 96 min.

Mr. Peabody & Sherman (Rob Minkoff) is an animated pic about a brilliant dog and his adopted son’s attempt to fix a time rift. Screened after press time – see review March 10 at nowtoronto.com/movies. 92 min.

300: Rise of an Empire (Noam Murro) is a sequel to 2006’s sword, sandal and steroid epic, chronicling the story of Greek general Themistocles (Sullivan Stapleton) and his fight against the Persian forces that killed King Leonidas. Screened after press time. See review March 7 at nowtoronto.com/movies. 102 min.