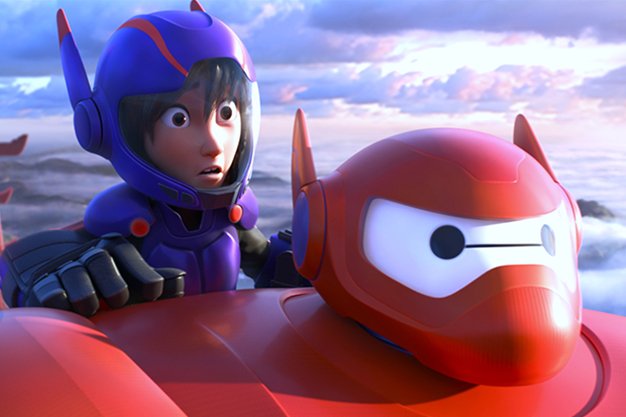 Big Hero 6 (Don Hall, Chris Williams) is a near-total reworking of a little-remembered comic property created in the late 90s. Hiro Hamada, a 14-year-old robotics genius (voiced by Ryan Potter), “upgrades” himself and four college-aged scientists to battle an emerging super-villain. But the real focus is on Hiro’s bond with his initial subject, a marshmallowy medical droid called Baymax (30 Rock’s Scott Adsit). Directors Hall and Williams find new angles on the required action beats, playing up the human relationships and having fun with Baymax’s logical, single-minded nature. And the world in which it all takes place – the Japanese-infused American metropolis of “San Fransokyo” – is a production designer’s dream. 108 min.

Citizenfour (Laura Poitras) chronicles the eight days Edward Snowden spent in a Hong Kong hotel room with filmmaker Poitras and journalist Glenn Greenwald, where he blew the whistle on America’s secret data-collection programs and the complicity of foreign governments in those efforts. If that sounds dull, it isn’t. A moment when Snowden takes precautions to avoid having his image captured by a laptop’s webcam, and Greenwald slowly realizes the implications of that action, is as unnerving as any contemporary espionage thriller. The other triumph of Poitras’s documentary is that it gives Snowden back his humanity. No cartoon traitor or fanatic, he’s a soft-spoken, thoughtful and profoundly intelligent young man – a conscientious objector in the face of Orwellian insanity. We are all in his debt. Some subtitles. 114 min.

Dear White People (Justin Simien) is a vital, immediate comedy about contemporary attitudes toward race, gender and sexuality, set at a fictional Ivy League school where racial tensions are creeping toward a flashpoint. Favouring Spike Lee’s School Daze over Do The Right Thing (which he quotes only in the service of a Tyler Perry joke), writer/director Simien builds a complex environment of clashing motivations and desires, each marked by sharp dialogue and believable conflicts. Everybody Hates Chris’s Tyler James Williams and Veronica Mars’s Tessa Thompson are particularly adept at investing Simien’s zingers with the exactly right amount of righteous condemnation, but the entire cast is game. See? Social awareness can be fun! 108 min.

Kung Fu Elliot (Matthew Bauckman, Jaret Belliveau) is one of the more complex documentaries made about misguided DIY filmmakers, Halifax martial arts aficionado Elliot Scott, who wants to become the first-ever Canadian action superstar. It delivers huge laughs with an underlying sadness. It’s good fun to watch Scott naively bumble his way around the creation of his third opus, Blood Fight, but as the doc approaches its final act, a major twist changes its tone almost completely. Filmmakers Bauckman and Belliveau lucked into an implausible true story in which the darkness and outlandishness keep escalating to a shocking yet unavoidable conclusion. That ending works wonderfully, forcing us to reconsider everything that came before. Scott clearly lives in his own fantasy world, and it’s an absolute trip to be let into it. 91 min.

The Overnighters (Jesse Moss) focuses on Jay Reinke, a Lutheran pastor in Williston, North Dakota, trying to shelter hundreds of people drawn there by the promise of lucrative jobs in the fracking industry. Pastor Jay’s message of charity grinds up against a town fearful of roughnecks with unknown pasts, and over time his choices seem perhaps riskier and more personal than they need to be. Documentarian Moss is an incredibly sympathetic filmmaker, and his masterstroke is to structure the film as a portrait of both an individual and a community. Everyone is allowed a point of view, even when that point of view seems reactionary and ill-informed. In a weird way, that’s America in a nutshell. 100 min.

The Secret Trial 5 (Amar Wala) sheds light on the impact 9/11 had on the individual rights of Canadians. The doc tracks the experience of five immigrants who were labelled terrorists and detained without charges, let alone a trial, via the rarely used security certificate. Director Wala talks to their lawyers and advocates and the detainees themselves, who were locked up based on evidence they were never allowed to see. After sustained campaigns, some were released and placed under house arrest, where the conditions, ironically, were worse than in prison. But the star of the movie is detainee Mohamed Harkat’s wife, Sophie, who became the human face of the protest.  The dreaded security certificates are coming back into play in the wake of the shootings on Parliament Hill, making the doc more timely than ever. If it seems biased, don’t blame the filmmakers. There wasn’t a single government representative who would talk to them. 84 min.

Don’t Get Killed In Alaska (Bill Taylor) is a surprisingly effective micro-budget family drama with only a handful of characters and scenes. The film’s limited resources often show, but writer/director Taylor handles this well, keeping the sentiment in check and garnering strong performances from his cast, particularly young star Tommie-Amber Pirie as Liney, a directionless 20-something who keeps a distance from her family with good reason. They are still hurting from past issues that have torn them apart. But Liney needs money to get to Alaska, so she hits up her mom, bro and dad, aware that she’ll be tip-toeing around a lot of pain, tension and disappointment. Some plot elements and dialogue feel contrived, but each of the characters has an honest core that Taylor builds on to reach a touching and satisfying conclusion. 96 min.

The Theory of Everything (James Marsh) takes the remarkable, complex story of theoretical physicist Stephen Hawking and imprisons it in the inspirational treacle of a disease-of-the-week movie about a young couple struggling with life-altering illness. Adapted as cloyingly as possible from Jane Hawking’s autobiography, it has no time for Hawking’s work (He Dazzled His Peers! He Wrote A Bestseller!) or for the very real hardships Stephen and Jane faced over their decades of marriage. Eddie Redmayne and Felicity Jones make it worth watching, grounding their relationship in anguished good humour, but Anthony McCarten’s script sees them only as noble sufferers waiting for the next challenge. 123 min.

Life’s a Breeze (Lance Daly) is a fluffy crowd-pleaser about a working-class Dublin family hunting for a mattress stuffed with a million euros. Fionnula Flanagan stars as Nan, an elderly hoarder whose adult kids thought they were doing her a favour by clearing out her junk, including her well-worn mattress. Unbeknownst to them, it contains Nan’s life savings, which adds up to a figure that makes her children, the media and all of Ireland go a little loopy. The film is thankfully brief, and the comedy is hokey before the mattress shenanigans even begin. The film stays at the level of Nan’s loud and unbelievably dense son Colm (Pat Shortt), whose light-hearted stupidity is meant to be the main attraction. Flanagan and appealing newcomer Kelly Thornton, as Nan’s teenage granddaughter, deliver the only tolerable performances, probably because they don’t say much, and like us, just observe the silliness. 83 min.

Slums: Cities of Tomorrow (Jean-Nicolas Orhon) tours “squatter communities” from Bangalore to New Jersey, offering an emotionally flat survey with few insights. The film never homes in on an argument or a point. Like its subject, Slums is overpopulated, a filmed Rolodex of talking heads. Sociologists take turns defining low-to-no-income makeshift neighbourhoods around the world. Meanwhile residents briefly list their struggles and joys. Most slum dwellers are only filmed long enough to deliver a pull quote, so it’s impossible to make a human connection. Only an Indian mother earns our sympathy, not so much for her squalid housing but for the brave front she puts up. She tells her children to lie at school about how well they eat so they can avoid being tormented for coming from the slums. Subtitled. 83 min.

The Metropolitan Opera: Macbeth Encore is a high-def broadcast of Verdi’s opera, starring Zeljko Lucic and Anna Netrebko as the murderous couple. 195 min.

National Theater Live: Of Mice and Men is a high-def broadcast of the Broadway revival of Steinbeck’s classic drama, starring James Franco and Chris O’Dowd. 150 min.