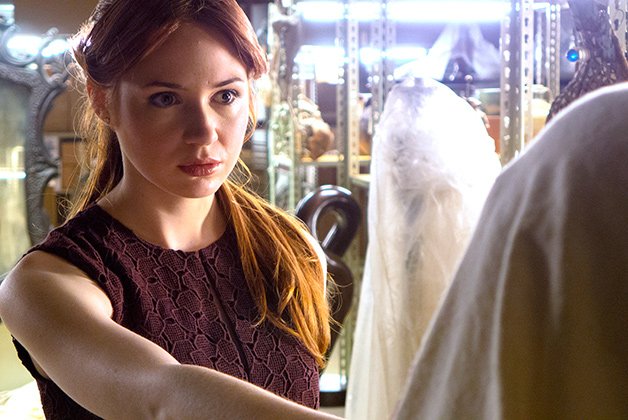 Dom Hemingway (Richard Shepard) stars Jude Law as a foul-mouthed, cocky (just listen to his hilarious, ribald opening monologue), middle-aged safecracker who’s released from prison after 12 years and goes looking for the money that’s owed him. There’s also the matter of reconnecting with his daughter (Game Of Thrones’s Emilia Clarke, unrecognizable), who grew up in his absence and wants nothing to do with him. Law delivers a ferocious comic performance with layers of pain, hurt and guilt bubbling beneath his raucous, bulging-veined exterior. Director Shepard (The Matador) matches the manic-depressive energy of Law’s Dom. The film’s filled with bold colours, big, clear chapter titles and a couple of marvellously fun set pieces. The supporting actors are good but don’t have much to do. Richard E. Grant’s role as Dom’s nattily dressed best friend is essentially a series of nervous reaction shots. But Law is feckin’ brilliant. 94 min.

Mistaken for Strangers (Tom Berninger) is billed as a documentary about the National, but it’s really a study of the Berninger brothers and their fractured relationship. Matt is the successful one, fronting a popular and well-regarded band, while documentarian Tom – who’s nine years younger – is the fuck-up determined to make something of himself, even if he doesn’t fully understand how. Though he’s credited as director and shares editorial credit with producer Carin Besser – who’s also Matt’s wife – Mistaken For Strangers has clearly been constructed after the fact by a number of editorial consultants, including executive producer (and two-time Oscar nominee) Marshall Curry. I don’t point this out to take anything away from the finished doc, which is really clever in its deconstruction of the Berninger brothers’ emotional dynamic. I just have trouble believing that Tom did the deconstructing himself. 75 min.

Oculus (Mike Flanagan) feels like a response to the diminishing returns of the Paranormal Activity series, with most of the action confined to a suburban home where a family falls under the sway of something awful – in this case, a centuries-old mirror that may or may not be haunted. Brenton Thwaites and Doctor Who fan favourite Karen Gillan are adult siblings who blame the mirror for the deaths of their parents (played in flashback by Rory Cochrane and Katee Sackhoff) 11 years earlier – or at least one of them does, and is determined to prove it scientifically. Naturally, things don’t go well at all, and before too long our heroes are reliving their previous encounter, which unfolds in a parallel narrative. Oculus may not do anything especially new – in fact, its vibe is strangely similar to that of last year’s Mama – but it’s cleverly written, and the actors are all much better than they need to be. 105 min.

The Galapagos Affair: Satan Came to Eden (Dan Geller, Dayna Goldfine) plumbs strange history for juicy soap opera narrative, whisking us back to the remote Galapagos island of Floreana in the 1930s, when a handful of European eccentrics attempted to escape civilization and wound up becoming precursors for a season of Survivor. The islanders included a Nietzsche-fixated German physician and his younger MS-afflicted lover, another German couple expecting their first child and an imperious self-described French baroness accompanied by gigolos. The story, which climaxes with apparent murder, is inherently captivating, but the execution suffers from an excessively leisurely pace, over-used stills and mostly superfluous interviews with the subjects’ descendants. It’s worth seeing, but the tale could have been better conveyed in a long-form magazine piece or a well-structured book. 120 min.

The Raid 2 (Gareth Huw Evans) expands the graphic, visceral action of Evans’s breakout 2011 thriller into a more ambitious riff on Infernal Affairs and The Departed, with hero cop Rama (Iko Uwais) ordered to infiltrate an Indonesian crime family to root out corrupt cops or something. It doesn’t really matter in no time at all Rama’s battling every thug and assassin in Jakarta in an epic series of battles. As before, Evans builds an entire aesthetic around the hammer scene in Oldboy, with brutal pummellings paying off in gruesome comic punchlines. It’s all about the smashy-smashy, and on that level it certainly delivers. But at two and a half hours, The Raid 2 proves as exhausting an experience as its predecessor. It’s a blunt instrument that just keeps pounding after everything’s turned to powder. Subtitled. 148 min.

Algonquin (Jonathan Hayes) hasn’t got one of those godawful Canadian scripts, but it’s pretty weak. Ailing bad-boy author Leif Roulette (Nicholas Campbell) has convinced his aspiring writer son Jake (Mark Rendall) to help him finish a book about the Algonquin Park cabin the family used to love. When Leif dies, Jake reluctantly decides to finish the project, but as he’s writing at the cabin, his dad’s secret family – Carmen (Victoria Sanchez) and her son, Iggy (Michael Levinson) – descend, forcing Jake to deal with his feelings about his father and his own art. The script veers from fuzzy (will Jake and Iggy connect?) to icky (possible chemistry between Jake and Carmen), and Leif is too repulsive to care much about. But Sheila McCarthy is terrific as usual as Jake’s mom, and Rendall (Victoria Day) is a major talent. Give this guy the script he deserves. 101 min.

Draft Day (Ivan Reitman) borrows its plays from 2011’s Moneyball it’s built around the business of recruiting players and shaping a winning team. Kevin Costner stars as Sonny Weaver, the worn-out GM of the Cleveland Browns, who approaches the NFL draft as the unpopular figurehead of a desperate team. Moneyball took a novel approach by exploring the numbers you see on the back of a Fleer card and whittling baseball down to a mathematical equation. Draft Day is much more old-fashioned. Gut instinct trumps whatever stats the professionals can conjure up, and in the end the nicest guys get their payday while the popular folks are exposed for the douchebags they really are. Sonny may be looking beyond statistics, but Draft Day plays entirely by the numbers. 110 min.

Rio 2 (Carlos Saldanha) looks like a tropical fruit smoothie that can’t stop (won’t stop) spinning in the blender. The 3D animated sequel about a pack of blue macaw’s dancing their way from Rio de Janeiro to the Amazon jungle, presents a relentless flourish of bright colours impeccably choreographed to samba, R & B and show tune numbers. Amidst all the bacchanal, the busy plot and characters are as impressionable as the black tires on a carnival truck. Jesse Eisenberg and Anne Hathaway barely register in their return as Blu and Jewel, respectively, who along with their offspring take off for the Amazon to find more of their kind and learn how to live in the wild. There’s so much more than just that going on but everything just gets caught up in the airborne vortex of colour and music, propelled into the all consuming void this movie becomes, stealing away all your energy, emotion and leaving you drained and confused before the final tune is sung. 95 min.

Heaven Is for Real (Randall Wallace) is an adaptation of the non-fiction bestseller about a boy who had a near-death experience and claims he visited Heaven. See review in next week’s issue. 99 min.

Imagine: Life Spent on the Edge (Thierry Donard) is a documentary about extreme board sports set in breathtaking landscapes. 95 min.

The Nfinity Champions League Cheerleading Event is a high-def broadcast of the Atlanta competition featuring 30 of the best American squads. 130 min.