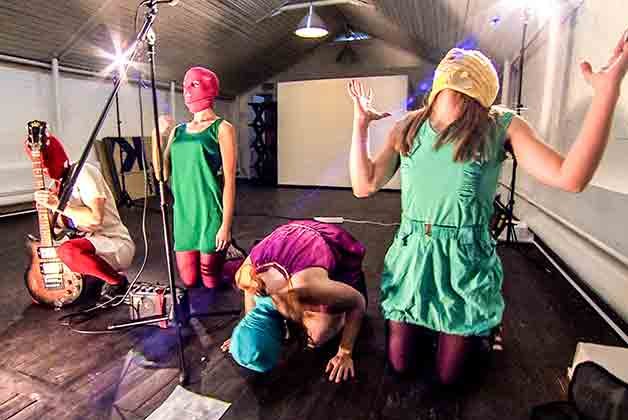 Pussy Riot: A Punk Prayer (Mike Lerner, Maxim Pozdorovkin) sends a note to authoritarian regimes: don’t think you can mount a show trial if the defendants are more media-savvy than you are. This and about a dozen other ideas – including the value of performance art and the power of Putin – are behind this kick-ass doc about Russian punk art collective Pussy Riot and the trial that ensued after the group put on a guerrilla performance – playing an anti-Putin anthem – in Moscow’s central cathedral. Charismatic arrestees Masha (Maria Alyokhina), Katia (Yekaterina Samutsevich) and especially Nadia (Nadezhda Tolokonnikova) plus coverage of the trial and demonstrations for and against Pussy Riot give this pic electrifying energy. See it. Subtitled. 88 min.

Gloria (Sebastián Lelio) stars Berlin Film festival best actress Paulina García as a smart 50-something Chilean divrocée yearning for sex and adventure. When Gloria meets Rodolfo (Sergio Hernández) at a club for middle-aged singles and begins a relationship, she has to decide whether she’s willing to settle for half measures. A central theme about how past relationships and offspring impinge on a person’s ability to connect makes the film relatable, as does the way director/co-writer Lelio presents these family situations. They’re never bathed in melodrama, but demonstrate in ordinary ways how Gloria’s self-centred family members can’t recognize that she’s a vibrant, intelligent woman worthy of anyone’s attention, be it theirs or that of a romantic partner. As essential as García’s wonderful performance is the unflinching portrayal of sex between aging partners, a candid glimpse of middle-aged sexuality that’s so rare in movies, it takes your breath away. Subtitled. 109 min.

About Last Night (Steve Pink) stars motor mouth Kevin Hart in an update of the 1986 rom-com, which in turn is an adaptation of wordsmith David Mamet’s provocative play Sexual Perversity In Chicago. This will likely be the only occasion you read the names Mamet and Hart in the same sentence. That’s too bad since the comedian has never been funnier. Hart is well matched with the excellent Regina Hall as Bernie and Joan, an on-and-off couple, fucking and screaming on the sidelines while their adorable friends Danny (Michael Ealy) and Debbie (Joy Bryant) work through the growing pains of a yearlong romance. In Hart’s previous outings, filmmakers seem satisfied with throwing him in scrappy, contrived scenarios so that he could freestyle his way through scenes. Here, Hart is working with real material thanks to the two degrees of separation from David Mamet’s play. Hart’s comedic talents are given structure and purpose, with enough room to put his own stamp on Mamet’s acidic dialogue. Sure, this may be watered-down Mamet. But for Hart, it’s 80-proof. 101 min.

Here Comes the Devil (Adrián García Bogliano) riffs on the slithery 70s grindhouse cinema of Jess Franco and Mario Bava, with their quick-zoom cinematography and self-consciously portentous tales of family members turning against each other. Writer-director García Bogliano’s tale follows Felix (Francisco Barreiro) and Sol (Laura Caro), whose children (Michele Garcia and Alan Martinez) go wandering into a creepy cave and disappear. They turn up the next day, but something’s not right. This is slow-burn horror, more concerned with creating a sense of dread than actual shocks or scares. And it works well enough until the climax, when García Bogliano just sort of lets the movie sputter out. Say what you will about Franco and Bava, they always knew how to end on a high note. Subtitled. 98 min.

7 Boxes (Juan Carlos Maneglia, Tana Schémbori) is a slight but not unsatisfying thriller that features a number of cartoonish supporting characters while making inventive use of Asunción, Paraguay’s labyrinthine Market No. 4. Its protagonist, a 17-year-old with far-fetched fantasies of screen stardom, accepts a dubious gig looking after some mysterious crates for a dodgy butcher, hoping to earn cash for a phone with a video camera. Inevitably, he draws the attention of an ever-growing number of criminals and corrupt cops who want a piece of whatever he’s holding. The proliferation of obstacles feels mechanical, but there’s something to be said for co-directors Maneglia and Schémbori’s ability to keep their machine running at a breathless clip. Subtitled. 102 min.

Endless Love (Shana Feste) is better than Franco Zefirelli’s 1981 original about passionate young love, but it’s still boring and silly. It starts off fine enough for the first 30 minutes or so, and the leads (Alex Pettyfer and Gabriella Wilde) are likeable and appealing as two kids just out of high school falling for each other, but it quickly devolves into silliness and contrivance. It’s only really worth it for some good supporting performances from Bruce Greenwood and Robert Patrick as the teens’ parents. 103 min.

Winter’s Tale (Akiva Goldsman) is an adaptation of Mark Helprin’s 1983 fantasy novel about a young thief (Colin Farrell) whose celestial fate is somehow connected to that of a dying heiress (Jessica Brown Findlay), with whom he falls in love whilst burgling her family’s New York townhome one lovely morning in December 1914. It has angels and demons and spirit-guide horses with translucent wings that emerge at just the right moments. And while that sort of story can sometimes work very well on screen, it doesn’t in Winter’s Tale, because writer/director Goldsman has absolutely no idea how to manage his movie’s tone or incorporate the plot’s more fantastical elements in a way that makes them seem possible or even credible. You can’t have gentle magic realism when you’ve also got Russell Crowe stomping around chewing scenery in a ridiculous Oirish accent either the whole movie has to match his performance, or he has to be talked down off his cliff. 118 min.

Odd Thomas (Stephen Sommers) is a horror film about a short-order cook with clairvoyant abilities. 96 min.