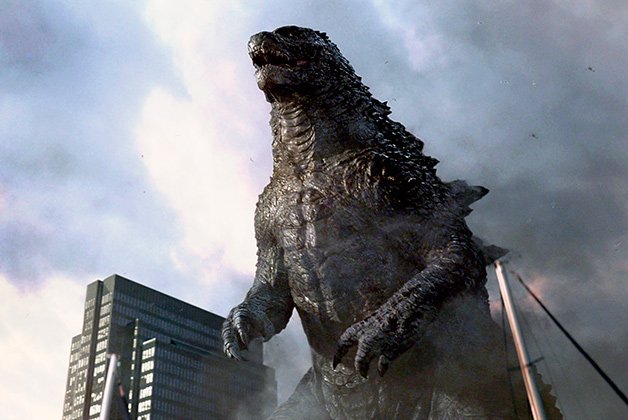 Godzilla (Gareth Edwards) finally gives the King of the Monsters a summer movie worthy of his stature, taking guidance not just from Jaws and Jurassic Park but from Close Encounters Of The Third Kind as well. This is a movie that values wonder as much as horror. Bryan Cranston, Juliette Binoche, Ken Watanabe and others play various puny humans sent scurrying by the advent of giant monsters in a world unaccustomed to them. Monsters director Edwards shifts between micro and macro views to let us revel in the spectacle of monster action – or teases us with the promise of same before pivoting away to another aspect of the story. This Godzilla builds on the framework of the best recent kaiju movies, The Host and Cloverfield, using their sense of scale and dread to craft an experience even larger and more powerful. While struggling to give their gargantuan hero agency and a personality, previous Godzilla movies failed to create characters in whom the audience could invest this one does both. And it’s so damn satisfying, especially in IMAX 3D. 123 min.

Ai Weiwei: The Fake Case (Andreas Johnsen) picks up exactly where Alison Klayman’s Ai Weiwei: Never Sorry ended, with the Chinese artist and activist released from detention after 81 days in the spring of 2011. Danish director Johnsen follows Ai as he weathers the next stage of his persecution by the Chinese government, a legal assault on his studio. The strangeness of the situation brings out Ai’s puckish wit. He works around the restrictions placed upon him by designing art in secret and openly videotaping the security agents assigned to intimidate him. It’s a fine study of a man trying to joke his way out of hell. Some subtitles. 79 min.

Million Dollar Arm (Craig Gillespie) is what happens when you put a Disney summer picture in the hands of genuinely talented craftspeople: it manages to tick every box in the sports-movie playbook while still feeling halfway intelligent and even surprising. Jon Hamm is effortlessly winning as an L.A. sports agent who hits on a scheme to recruit baseball talent from India Life Of Pi’s Suraj Sharma and Slumdog Millionaire’s Madhur Mittal are likeable and vulnerable as the young men he brings back to train as pitchers, and Lake Bell spikes her scenes as Hamm’s love interest with charm and unpredictable timing. But the real talent is behind the camera: screenwriter Tom McCarthy (Win Win) and director Gillespie (Lars And The Real Girl) go above and beyond the requirements of their true-life fantasy to deliver a proper movie experience. Some subtitles. 124 min.

Young & Beautiful (François Ozon) is the story of a 17-year-old high school girl who leads a double life as a prostitute – a junior Belle De Jour. It’s baffling work, but that’s its strength. As Isabelle’s (Marine Vacth) hormones surge, she dispenses with her virginity on a seaside vacation like she’s shedding a coat. But it’s never clear why she returns home and starts piling up cash by turning tricks after school. Is it because her dad is absent, or to separate from her caring mom (a superb Géraldine Pailhas)? Does she relish her sexual power? Told in four parts, each representing a season over a year, the movie has some charming grace notes: the loving relationship between Isabelle and her younger brother, a sequence in which her class discusses Rimbaud and a superb final scene featuring the great Charlotte Rampling. But it’s Vacth, luminous yet steely and able to speak volumes with silence, who owns this movie. Subtitled. 95 min.

Opens May 16 at Varsity. See here for times.

For No Good Reason (Charlie Paul) positions itself as a documentary about Ralph Steadman, the British illustrator (and NOW cover artist) whose instantly recognizable style was the perfect accompaniment to Hunter S. Thompson’s gonzo journalism in the glory days of Rolling Stone magazine. But director Paul and ostensible host Johnny Depp spend far too much time pumping the genial artist for stories of Thompson’s demented crusades (illustrated by animated versions of Steadman’s drawings, often narrated by Depp as Thompson), paying not nearly enough attention to the man in front of them. A sequence in which Steadman makes a lovely drawing of his dog – defining musculature through splotches of ink, creating personality in sharp little lines – is a fascinating window into his process. The film could have done with more of that and fewer video clips of Thompson acting out. 90 min.

Opens May 16 at Canada Square. See here for times.

Foxfire: Confessions of a Girl Gang (Laurent Cantet) is an overlong but mostly satisfying and detail-rich adaptation of Joyce Carol Oates’s novel about young women in 1950s upstate New York rising up against bullying males of all ages. Director Cantet (The Class) does a fine job building character and tension even when the story gets away from him, and the film deals with period-appropriate depictions of sexism and racism quite wonderfully. At the very least, it’s much better than the 1996 film version starring Angelina Jolie. 143 min.

Opens May 16 at TIFF Bell Lightbox. See here for times.

Now: In the Wings on a World Stage (Jeremy Whelehan) delivers exactly what it says on the tin: a look at the travelling company Kevin Spacey and Sam Mendes put together to take Shakespeare’s Richard III around the world in 2011. It’s an hour and a half of rehearsals and cast bonding, with just enough performance footage to make you long for a proper recording of the production. (Spacey’s take on Richard now seems like preparation for his charming House Of Cards schemer Frank Underwood.) But moments of real insight into the cast’s process or a sense of context for the play are few and far between. The quick-fire editing and insistently chipper musical score give the whole thing the feel of a commemorative DVD you’d pick up on your way out of the theatre after seeing the show. 93 min.

The Pleasures of Being Out of Step (David Lewis) is a pedestrian doc about Nat Hentoff, the veteran journalist, jazz authority and civil liberties advocate. Director Lewis fails to find a structure or rhythm to match the intelligence and puckish wit of his subject, but there are enough examples of Hentoff’s brilliant criticism (read by Homicide’s Andre Braugher) and clips of jazz greats (Coltrane, Parker, Mingus) he wrote about to help pass the time pleasantly. Using archival photos and interviews with the writer’s colleagues and friends, Lewis touches on some of Hentoff’s more controversial articles, like the one defending the right of neo-Nazis in Skokie, Illinois, to march in the 1970s, to his late-in-life stance on abortion, which caused huge rifts with his colleagues at the Village Voice. There are also amusing anecdotes about Bob Dylan and Malcolm X, and a generous clip from the notorious interview with a drugged-out Lenny Bruce he did for CBC-TV. 87 min.

Shekinah: The Intimate Life of Hasidic Women (Abbey Jack Neidik) looks inside the lives of teenage women in the ultra-Orthodox Jewish Chabad Lubavitch movement. Director Neidik presents the Lubavitchers as beautiful and enlightened (a variation on mindfulness is central to the practice). The film is mostly shot at the seminary in Ste. Agathe, where young women train to become mothers – the school’s energetic head, Chanie Carlebach, has 12 children – and to honour Jewish tradition. In no way isolationist, the school sends them into the wider community to mingle and talk about their values. There’s a telling sequence in which young women in the town confront the Hasidic girls about their attitudes toward gays, which doesn’t stop the trainees from blithely spouting their homophobia. But Neidik doesn’t question the rabbi’s characterization of the sect as feminist. If women are so deeply valued, why do Lubavitchers deny women the highest privilege in the Jewish faith, reading the Torah in synagogue? Because the sexes are separate and profoundly unequal. Some subtitles. 70 min.

Opens May 16 at Carlton Cinema. See here for times.