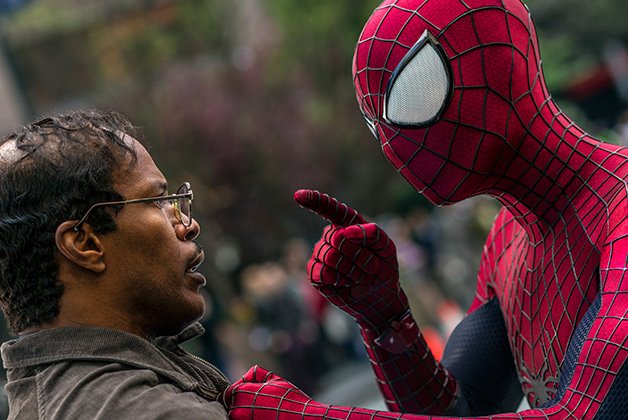 The Amazing Spider-Man 2 (Marc Webb) delivers virtually everything its predecessor did, in more or less the same order. It even starts at the same point as Amazing 1, expanding on the events of the night young Peter Parker’s doomed parents left him in the care of Uncle Ben and Aunt May, and it ends with a mopey Peter urged to make the most of his life by a handy speech recorded earlier in the story. In the middle, there’s jumping, fighting and web-swinging as our hero battles super-villains created by the nefarious Oscorp (Jamie Foxx’s scene-chewing Electro and Dane DeHaan’s calculating Harry Osborn). Andrew Garfield brings radically different physicalities to the paralyzed, self-doubting Peter Parker and his high-flying alter-ego, and Emma Stone’s plucky Gwen Stacy is basically Emma Stone infused with the proportionate adorability of a dozen golden retriever puppies. And Sally Field continues to be an affecting Aunt May. The plot about Peter’s dad and his super-secret research is unnecessary, and the need to set up more projects starts to weigh the picture down by the end. 142 min.

Joe (David Gordon Green) takes place in a small Texas town where a troubled alcoholic (Nicolas Cage) who manages a deforestation crew reluctantly takes an abused young boy (Tye Sheridan) under his wing. Tensions build, boiling points are reached – you know the deal. Director Green’s time in Hollywood has calcified his storytelling sense. Joe has a plot to play out from A to B to C, and it does so in a rigidly schematic manner, with clear good guys and bad guys and innocent children to be rescued from the monsters. It’s Sling Blade without the subtlety, or Mud (which also featured Sheridan as a resourceful teen bonding with a troubled man) without the texture. That said, Cage’s commitment to his role – and his insistence on playing it in a minor key – pulls things along admirably. 121 min.

Opens May 2 at Carlton Cinema. See here for times.

That Burning Feeling (Jason James) is a pleasantly odd little comedy about a hotshot Vancouver developer (Paulo Costanzo) who’s forced to look up his past sexual partners – and re-evaluate his life choices – when he’s diagnosed with gonorrhea. It doesn’t break any new ground for its genre, but Costanzo is an appealing lead, Scott Pilgrim’s Ingrid Haas puts some nice layering into the well-meaning but conflicted role of Costanzo’s do-gooder love interest, and John Cho and Tyler Labine have fun with their goofy supporting roles. 95 min.

Opens May 2 at Carlton Cinema. See here for times.

WWE Extreme Rules – 2014 is a live, high def broadcast of a wrestling match featuring John Cena, The Shield, Evolution and others. 180 min.