NOW MagazineMovies & TVFilm Friday: The Face of Love, Bears, Meetings with a Young Poet and more

Film Friday: The Face of Love, Bears, Meetings with a Young Poet and more 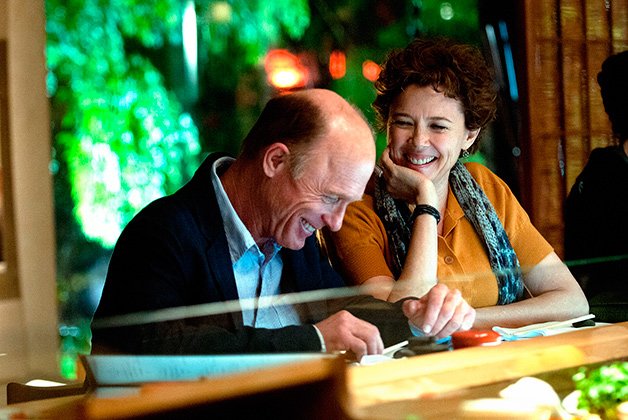 The Face of Love

The Face of Love (Arie Posin) is an absorbing, affecting tale of grief and love. Five years after her husband drowns on a trip to Mexico, the middle-aged Nikki (Annette Bening) meets Tom (Ed Harris), an artist who looks freakishly like him. She doesn’t mention the resemblance to Tom, who’s mending his own broken heart, and hides him from her daughter and friends, but her romantic fantasy can’t last forever. The script, co-written by director Posin, is layered and smarter than its soap opera potential, suggesting much about how we see what we want to see in people. And the actors are astonishing. Bening makes you feel every step of Nikki’s impossible journey to reclaim the past, while Harris brings vulnerability and depth to Tom, who’s got secrets of his own. A smart romance for grown-ups. 92 min.

Bears (Alastair Fothergill, Keith Scholey) is this year’s Disneynature documentary release, and the most shamelessly contrived one yet, taking gorgeous wildlife photography of Alaskan brown bears and editing it into a fictionalized, ridiculously anthropomorphic narrative about a mother and her cubs avoiding perils while foraging for seafood in the Arctic wilderness. More than previous projects, this one is aimed at very small children, with editors working overtime to create conflict through the juxtaposition of footage and John C. Reilly’s narration alternating from calm, informative description to goofy imagined dialogue for the animal characters. (“I didn’t want that clam anyway.”) That said, there are few things more adorable than brown bear cubs falling asleep next to their mother, so if that’s all you want from a movie called Bears, this one certainly delivers. 77 min.

small time (Joel Surnow) stars Christopher Meloni as Al, co-owner of a used car lot where he and his partner (Breaking Bad’s wily Dean Norris) make pliable customers offers they should probably refuse but somehow can’t. The film opens with the duo extorting a car thief to make a sale. When Al’s 18-year-old son (Toronto native Devon Bostick) decides to skip college and join his dad’s hustle, small time shifts into a father-son bonding tale that isn’t as canned and syrupy as it could have been. Surnow lends genuine warmth and charm to his often cold-hearted characters. Though some of the gags and drama feel artificial, the movie works because the talented cast sells it so well. 95 min.

Trailer Park Boys: Don’t Legalize It (Mike Clattenburg) plays very much like the boys’ cult TV series, with the same loose mock-doc style and plot lines involving selling stolen urine for drug tests and attempting to prevent the legalization of marijuana because it would cut into Ricky, Julian and Bubbles’s homegrown businesses. Thankfully, the new movie feels more like a celebration than a retread. There’s an undeniable sweetness to the gang’s relationships, a refreshingly un-Canadian brashness to their humour, which leaves an oft-overlooked darker sour aftertaste. It’s what made the Trailer Park Boys an unexpected hit in the first place that somehow continues to resonate over a decade later. 95 min.

Transcendence (Wally Pfister) has a premise that could be the stuff of grand sci-fi inquiry or the latest iteration of The Lawnmower Man, so it’s a little frustrating to see it settle for the middle ground of a ticking-clock thriller in which scientists debate the ethics of interfacing consciousness with computers and Johnny Depp’s digitized face makes grand statements about upgrading humanity after his assassinated visionary, Will Caster, is uploaded to a supercomputer. Pfister’s directorial debut cross-pollinates everything from Colossus: The Forbin Project to Demon Seed, with maybe a little of James Cameron and Edgar Wright’s post-punk sensibility in there, too. But it doesn’t quite capture the doomed love at the heart of the story: Will’s widow (Rebecca Hall) repeatedly avoids the question of whether that really is her husband who’s taken up residence on her iPad. 117 min.

Meetings with a Young Poet (Rudy Barichello) unfolds over a 24-year period, chronicling a hypothetical friendship between author Samuel Beckett and fictional Montreal poet Paul Susser, who also encounters a seductive actor aiming to cast herself against gender in Krapp’s Last Tape. Among the film’s quotation-spouting pedants, none is duller and more pretentious than the protagonist. Yet Stephen McHattie’s endlessly watchable as Beckett, a shock of grey nesting atop his wizened face, eyebrows flaring like an old chair losing its stuffing, a distant gaze, a gravelly voice slipping supplely between French and Irish-hued English. A highlight: Beckett childishly swinging his feet off the back of a wagon traversing a cemetery. If only we could luxuriate exclusively in such lovely incidentals. 87 min.

Stress Position (A.J. Bond) opens with a couple of really gripping scenes establishing a rock-solid premise – filmmaker Bond and his actor friend David Amito bet each other $10,000 that Amito will be able to resist a week of Guantanamo Bay-style incarceration – and then slowly lets it slide away through bad storytelling choices and inconsistent behaviour. Bond’s script also gets overly precious about whether what we’re seeing is real or fictional, introducing a producer (Marguerite Moreau) whose ethical and dramatic concerns are designed to anticipate our own. This winds up feeling like a very awkward attempt to add self-awareness to a project that’s only just realized it desperately needs some. 79 min.

Afternoon of a Faun: Tanaquil Le Clercq (Nancy Buirski) is a doc about the legendary ballerina, who was muse to choreographers George Balanchine and Jerome Robbins and died tragically young. 91 min.

Authors Anonymous (Ellie Kanner) is a comedy about a group of unpublished writers. 95 min.

The Battery (Jeremy Gardner) is a horror film about two former baseball players who encounter zombies in the back roads of post-plague New England. 101 min.

Hold Fast (Justin Simms) is drama about a 14-year-old whose life is upturned when his parents are killed in a car crash. 94 min.

National Theatre Live: War Horse – Encore is a high-def screening of the stunning stage version of Michael Morpurgo’s young-adult tale of a boy and his horse in World War I. 168 min.