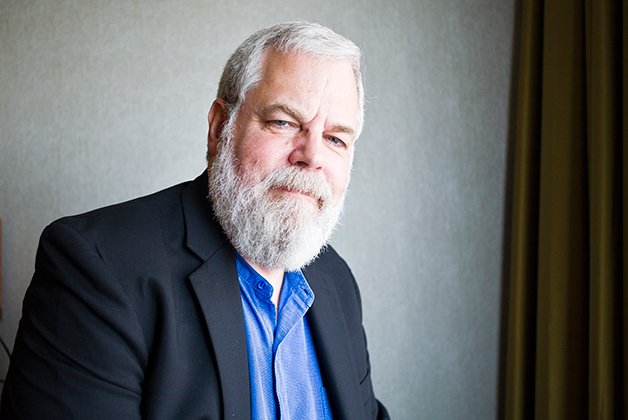 Cheap Thrills (E.L. Katz) is the indie thriller version of Magic Mike, where the question of what a person will do for money in contemporary America is answered with “get really bloody.” A mechanic (Pat Healy) in dire financial straits runs into an old friend (Ethan Embry) at a bar when both of them are approached by a wealthy couple (David Koechner, Sara Paxton) who offer them cash to take a series of dares that grow darker as the financial stakes rise. All four actors are great. Healy’s terrific as a man forcing himself to endure profound suffering for a quick payday, Embry uses a Brad Pitt impression to appear tough, Koechner is marvellously obnoxious as their chipper tormentor, and Paxton (who co-starred with Healy in The Innkeepers) is nicely ambiguous as a bored trophy wife. And the ending doesn’t punk out. 85 min.

Tim’s Vermeer (Teller) may have art historians in a huff. The revelatory documentary on the magic behind Johannes Vermeer’s paintings comes to you courtesy of Vegas headliners Penn & Teller. The illusionists, known for breaking down tricks, are the ideal hosts for a film that deconstructs the 17th-century painter’s craft and hypothesizes how he so meticulously recreated lifelike light and details. The filmmakers follow their good friend Tim Jenison, an inventor of 3D imaging, who obsessively attempts to paint a Vermeer with his own hand in order to figure out what optic technology the Dutch master might have used. Thanks to Penn & Teller’s inexhaustible charm in front of and behind the camera and Jenison’s endearing case of OCD, the resulting film is a comic delight that marvels at the intersections between art and science, painting and cinema, and illusionists and documentarians. 80 min.

The Wind Rises (Hayao Miyazaki) is a historical drama with a classical sweep that recalls David Lean’s epics – Miyazaki’s Doctor Zhivago. The animator finds a kindred spirit in subject Jiro Horikoshi, a WWII-era engineer who designed planes. Like Miyazaki, Jiro employed technology to realize artistic dreams, but Jiro lives with the bitter understanding that what he builds will be used for destruction – including the bombing of Pearl Harbor. The film draws to a close before that fateful event, but its legacy hangs like a dark cloud over the story as Jiro navigates his way through school, the Great Depression and an industrial competition with the West. A sly and telling bit of artistic licence also has death casting a shadow over Jiro’s love life. Miyazaki’s expressionistic, hand-drawn designs are the raison d’être for The Wind Rises – billowing clouds swallow planes whole and the devastating 1923 Kanto earthquake sounds like the Earth digesting life. 127 min.

Money For Nothing: Inside The Federal Reserve (Jim Bruce) recounts American economic history in full in the service of a thorough explanation of the workings of the Federal Reserve Bank, which shapes the U.S. economy by setting interest rates, printing money and saying reassuring things when the raging monster that is American capitalism starts to eat itself. (That happens more often than you’d expect, if you’re the Fed.) Documentarian Bruce clearly has the best intentions, but his gimmick of explaining financial concepts with familiar clips from Frankenstein and It’s A Wonderful Life was square when Michael Moore did it 20 years ago. Money For Nothing can’t help but feel superfluous and tepid when compared to Charles Ferguson’s 2010 Oscar winner, Inside Job, which blended historical insight with a furious moral certitude. 104 min.

Pompeii (Paul W.S. Anderson) is a swords-and-sandals apocalypse from Resident Evil director Anderson, who’s clearly more concerned with his third-act CG pyrotechnics than with the low-rent mashup of Spartacus and Titanic that forms the bulk of the script. At least Kiefer Sutherland is fully aware that he’s got the Billy Zane role. The story’s your basic “Romeo and Juliet witness a historical disaster” pitch, with Game Of Thrones star Kit Harington as a gladiator and Emily Browning as a forward-thinking socialite who fall in love in the days leading up to the eruption of Vesuvius. This allows Anderson to alternate subpar fight sequences with dull conversations about the glory of Rome between Browning’s parents (Jared Harris and Carrie Anne-Moss) and Sutherland’s eeeeevil senator. 104 min.

3 Days to Kill (McG) tries to recapture the lightning-in-a-bottle success of Taken with another middle-aged action hero beating up ethnic caricatures in Paris, but the formula just doesn’t work this time around. Kevin Costner is entirely convincing as a dying CIA operative whose attempts to reconcile with his ex (Connie Nielsen) and their daughter (Hailee Steinfeld) are complicated by the agency’s insistence that he hunt down an elusive super-terrorist who’s surfaced in the City of Light. This ought to be a no-brainer, but the mismatched sensibilities of producer/co-writer Luc Besson and director McG, stiff supporting turns from Nielsen and Amber Heard as Costner’s insistently slinky handler and insultingly haphazard production values (atrocious dialogue looping, incoherent action scenes, a character called The Albino who’s basically just bald) keep it from ever taking off. Some subtitles. 117 min.

WWE Elimination Chamber – 2014 is a live high-def screening of a match featuring Daniel Bryan and other WWE superstars. 180 min.