Film Friday: Under the Skin, Ida, Locke and more 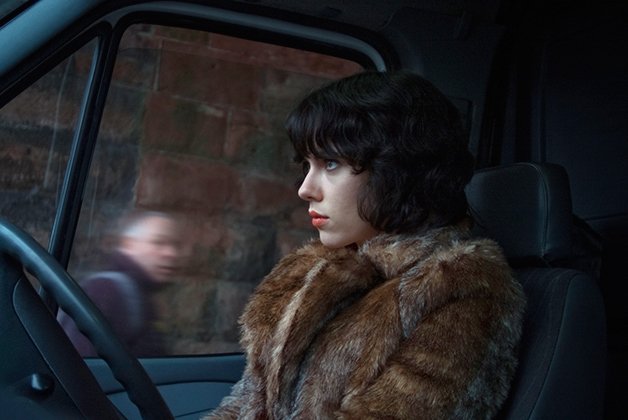 Scarlett Johansson definitely got Under The Skin for her turn as a predatory alien.

Under the Skin (Jonathan Glazer) will indeed get under your skin. It’ll also provoke lots of discussion and, likely, disagreements. Scarlett Johansson plays a beautiful alien who drives a white van around the grey, drab roads of Scotland to pick up single men and mysteriously dispense with them. While this sounds like some sci-fi thriller – Species 4! – it’s anything but. Loosely based on Michel Faber’s novel, it deals with big themes like alienation, charity and – hell, why not? – the human condition. One remarkable sequence manages to look at Glasgow’s citizens as if through the eyes of someone not quite human. The harsh, rugged landscape helps immensely, as does Johansson’s restrained performance and Mica Levi’s hypnotic, disturbing score, which will bore its way into your subconscious. This one will haunt you. 108 min.

Ida (Pawel Pawlikowski) follows novitiate nun and orphan Anna (Agata Trzebuchowska) as meets her aunt Wanda (Agata Kulesza) for the first time. Anna’s real name is Ida and she is Jewish, her aunt tells her, so the two set out for the small town where Wanda believes Ida’s parents were killed, picking up a hitchhiking musician (Dawid Ogrodnik) who gives Anna her first taste of what can happen outside the nunnery walls. Anna is pure and unworldly, Wanda a hard-drinking, cynical Communist judge – and Pawlikowski’s cast the film accordingly, eliciting a luminously wide-eyed performance from first-timer Trzebuchowska and a world-weary turn from veteran Kulesza. He’s shot in crisp black-and-white, and the Dogme-influenced soundtrack makes the most of every creaking convent door. It’s never clear why Wanda contacts the convent after nearly two decades, but the film tackles the complex issues of faith, hypocrisy and wartime accountability with nuance – and it’s drop-dead gorgeous. Subtitled. 80 min.

Opens May 9 at TIFF Bell Lightbox. See here for times.

The Lady in Number 6: Music Saved My Life (Malcolm Clarke) is 2014’s Oscar-winning documentary short about concert pianist Alice Herz-Sommer, the oldest Holocaust survivor at the time of the shoot, whose trauma inside the Theresienstadt concentration camp was eased by her commitment to her music. She continued to play the piano while imprisoned in fact, she was expected to. A strength of this doc is its study of this particular camp, located in what is now the Czech Republic, which housed many accomplished artists and was used as a propaganda tool by the Nazis, who frequently released films of inmates performing for officers to allay suspicions that Jews were being slaughtered. But Herz-Sommer is the centrepiece, seen playing Mozart and Beethoven not quite with the stellar precision of a young pianist but with passion – and by heart. Her testimonials to the power of music to sustain her throughout her life are gobsmackingly beautiful. 39 min.

Locke (Steven Knight) is an intense character study unfolding more or less in real time about a construction foreman (Tom Hardy) who puts his personal and professional lives at risk to make an impromptu drive from Birmingham to London. With nothing but Hardy stuck behind the wheel of a car talking to a speakerphone, writer-director Steven Knight has made a brooding consideration of the price of having a moral code. It’s amazing what a high-wire act that turns out to be. Co-stars like Olivia Colman (Broadchurch) and Ruth Wilson (Luther) make considerable impressions given that they’re heard only as disembodied voices. Knight’s carefully calibrated script provides rock-solid motivations for Hardy’s character you could quibble that the method by which that exposition is delivered is a bit gimmicky, but it doesn’t diminish what Knight and Hardy have achieved. This is a remarkable cinematic experiment. 85 min.

Neighbors (Nicholas Stoller) stars Seth Rogen and Rose Byrne as new parents enmeshed in a prank war with the frat house that’s moved in next door. As he did in Forgetting Sarah Marshall and Get Him To The Greek, director Stoller manages to interlace the escalating insanity with surprising emotional intelligence: Neighbors isn’t just about stolen airbags and über-keggers it’s about the leads’ desperation to still identify as young and cool to Zac Efron’s alpha bro and his followers. Extra points for the amazing supporting cast, which includes such comedy MVPs as Ike Barinholtz, Carla Gallo, Hannibal Buress, Jason Mantzoukas and Lisa Kudrow. You never know where the next laugh will come from. 96 min.

Belle (Amma Asante) spins the life of Dido Elizabeth Belle, daughter of an 18th century British naval officer and an African slave, into a historical biopic that aspires to more complexity than its lavish costume-drama packaging will allow. Gugu Mbatha-Raw is a strong lead as a young woman brought up among gentry while forever kept at a remove from them Tom Wilkinson is nicely stuffy as the uncle who’s raised her, and Sarah Gadon is terrific as his more privileged daughter. But while Misan Sagay’s script is rife with intriguing subtext, the text itself is a little simplistic, with stilted dialogue and broader-than-necessary supporting performances by Miranda Richardson and Tom Felton as Dido’s social-climbing antagonists. Those elements work against Asante’s goal of an accessible, mass-audience drama that shows how the story’s real issues of race and gender are still (sadly) entirely relevant today. 104 min.

I Used to be Darker (Matthew Porterfield) peruses the dynamics of a splintering family. A Baltimore couple, musicians both, undertake a painful separation exacerbated by professional resentments their distraught daughter cuts ties with her mother they receive an unexpected visit from a pregnant niece. The camera is unimposing, the performances naturalistic and warm, Porterfield’s sense of place authoritative and inviting. But I Used to Be Darker dissipates when it swerves into high drama. The absence of scoring signals an intention to avoid easy sentimentality, yet the frequent use of onscreen musical performance, replete with on-the-nose lyrics, has the unfortunate effect of overstating themes and emotions already implied. The finest moments are subtle, atmospheric, seemingly incidental, transporting us someplace familiar yet experienced anew, while the drama itself just feels familiar. 90 min.

Opens May 9 at TIFF Bell Lightbox. See here for times.

Stage Fright (Jerome Sable) is Meatballs meets Glee meets Phantom Of The Paradise. Ten years after a Broadway diva (Minnie Driver) is butchered on the opening night of The Haunting Of The Opera (get it?), her twin kids (Allie MacDonald and Douglas Smith) are working as cooks at a musical theatre summer camp, where weird things begin happening around a remount of Haunting. Director Sable throws in allusions to everything from Hellraiser to Carrie, and the camp setting (filmed in Parry Sound and North Bay) gives the exterior shots authenticity. The opening third rambles, the tone occasionally feels icky – those prepubescent campers aren’t gonna die, are they? – and there’s some problems with lip-synching and looping of songs. But the tunes (co-written with Eli Batalion, who’s got a cute cameo) are clever, the final reel is filled with lots of gruesome, unpredictable fun, and the killer’s screeching theatre-related bons mots are to die for. 102 min.

Opens May 9 at Carlton Cinema. See here for times.

Teenage (Matt Wolf) charts the development of the teenager, a 20th-century invention that changed adolescents from exploited factory workers to a lucrative though still exploited demographic of consumers. Using archival footage from life and pop culture along with sly recreations, director Wolf draws parallels between the flappers and the jitterbugs, the Boy Scouts and the Hitler Youth. Instead of spelling out a convincing argument, the films opts for a mixtape of history, where images both idyllic and turbulent dance to a funky soundtrack. While the collage often feels repetitive, it pays lyrical and intoxicating tribute to the spirit of the teenager – at once assertive and vulnerable, confused and confusing, supposedly unique yet always steering toward the flock. 78 min.

Fed Up (Stephanie Soechtig) is so intent on selling its thesis – that sugar is terrible for you, and it’s in everything – that it becomes hectoring and exhausting. The fact that America’s heavily sugared processed-food diet has produced to an epidemic of morbidly obese children (prone to type 2 diabetes, metabolic syndrome and other ills) is certainly important, but anyone who’s bought a ticket to this movie already knows processed foods are bad and fresh foods are better. Director Soechtig goes all in on simplistic messaging, cutesy animated graphs and repeated comparisons of today’s sugar industry to the tobacco conglomerates that pushed back against scientific reality for decades. I agree with everything Fed Up is saying, and I still wanted to walk out. 92 min.

Moms’ Night Out (Andrew and Jon Erwin) is a slapstick comedy about an overworked mother whose evening off turns into a zany, life-affirming adventure. It could be something out of the Judd Apatow factory but is actually a Christian movie on the sly, sneaking in the faith before you catch on to the absence of f-bombs and lewd sexual innuendo. If you’re expecting The Hangover, this one comes with a virgin twist. The Christian agenda here is far more welcoming and less assaultive than previous attempts of its kind, but the movie has more practical problems than the gentle sermon buried between the lines. The ladies’ night starts off charmingly but soon disintegrates into an over-the-top, asinine search for a missing baby that’s full of strained, antic gags and uncommonly polite bikers and alcoholics, all of whom are God’s children, because that would be the point. I was sincerely hoping the whole package would work, but somewhere during the foolishness I lost faith. 99 min.

The German Doctor (Lucía Puenzo) is a biographical thriller about an Argentine family who lived with Nazi butcher Josef Mengele without knowing his identity. 93 min.