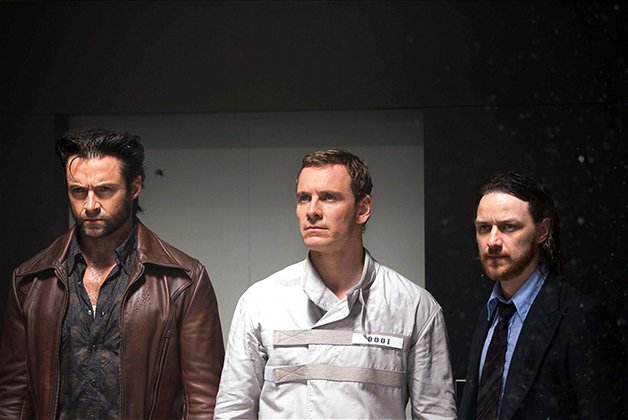 X-Men: Days of Future Past

X-Men: Days of Future Past (Bryan Singer) finds producer/director Singer knitting together the splintered continuity of the Marvel movie franchise by sending Hugh Jackman’s Wolverine back to 1973 to rewrite history by preventing an incident that will send human-mutant relations down an apocalyptic path. But really it’s an excuse to let the all-star casts of the original X-Men trilogy and 2011’s sprightly X-Men: First Class share the same feature while the effects crew comes up with nifty new gags and suitably spectacular set pieces. Michael Fassbender is once again an even more charismatic Magneto than Ian McKellen, Jennifer Lawrence rocks the blue bodysuit as Mystique, James McAvoy has a lot of fun with the notion of an angry, dissolute Charles Xavier and series newcomers Peter Dinklage and Evan Peters make vivid impressions as sinister scientist Bolivar Trask and wisecracking speedster Peter Maximoff, respectively. Co-stars Jackman, Nicholas Hoult, Ellen Page and Halle Berry don’t get quite as much to do, but that’s okay this one isn’t really about them. Some subtitles. 131 min. NNNN (NW)

112 Weddings (Doug Block) is a documentary based on 20 years of wedding videos shot by filmmaker Block. Tracking down some of his former clients to see how their romances have fared, he shows clips from those happy nuptials and what their lives are like now. The results aren’t surprising: children radically affect a relationship, as do illness, moving and employment. Some couples trust him enough to open up, while others say more with their body language than with words. A number have divorced. Block’s narration isn’t very inspired, but he made a good decision to follow two pairs who are about to be married, one a young couple and another whose commitment ceremony he filmed years before who now want to legally tie the knot. Both of these stories add a sense of momentum and drama to a documentary that occasionally feels episodic. 93 min. NNN (GS)

The Birder (Ted Bezaire) is a pleasant but insubstantial comedy starring Ed’s Tom Cavanagh as an awkward high school biology teacher and birding enthusiast who embarks on a half-assed campaign to win back his wife (Allana Harkin) with the help of an equally hapless former student (Algonquin’s Mark Rendall). Cavanagh commits fully, and director Bezaire stages some visually striking images with the help of cinematographer Arthur E. Cooper, production designer Taavo Soodor and art director Jessica Cook. But the film falls victim to its inconsistent tone: Cavanagh and Rendall are playing cartoonish characters, but no one else is. You get the sense that there just wasn’t enough material here for a feature film, but someone insisted on making one anyway. 85 min. NN (NW)

Opens May 23 at Carlton Cinema. See here for times.

Fading Gigolo (John Turturro) stars Woody Allen as Murray, who becomes part-time flower arranger Fioravante’s (director Turturro) pimp. It’s plainly an homage to Allen’s films, with its jazz-based soundtrack, offbeat Jewish humour – it’s set in Brooklyn close to an Orthodox Jewish enclave – and Allen as another endearing schlemiel. And what would a paean to the Woodster be without a bit of an ick factor? Turturro delivers with a borderline offensive set-up between working boy Fioravante and an Orthodox Jewish widow (Vanessa Paradis). The film also asks that you buy the idea that Sharon Stone and Sofía Vergara couldn’t get a threesome together without paying a male third party. You might go for Fading Gigolo if you do, but the rest of us know an elaborate male fantasy when we see it. 98 min. NN (SGC)

The Love Punch (Joel Hopkins) stars Emma Thompson and Pierce Brosnan as divorced Brits who reunite to get payback from the slimy French businessman who scammed them out of their life savings. This involves flying down to the Côte d’Azur, impersonating Texans to crash a wedding and attempting to steal a $10 million diamond. The script is ludicrous, full of plot holes and unfunny jokes about physical ailments, and Hopkins’s direction feels laboured. (His Last Chance Harvey, also with Thompson, was much more graceful.) But the two leads, along with Celia Imrie and Timothy Spall as their best friends, seem up for anything, and their enthusiasm carries the picture along. Look for two amusing running gags, one involving a character’s exciting past, the other involving Skype. 94 min. NN (GS)

Blended (Frank Coraci) is Adam Sandler’s latest dump into theatres as star and producer. Sandler and his Wedding Singer co-star Drew Barrymore play single parents who, after enduring a bad blind date, find themselves saddled together with their broods on a South African safari – a ridiculous scenario that requires the crappy screenplay to perform plot-machination backflips. Instead of building on Sandler’s knack for intimate comedy, the movie surrounds him with horny rhinos, wild ostrich rodeos and supporting players like Shaquille O’Neal and Kevin Nealon, whose mere presence is supposed to signal comedy despite the absence of actual jokes. 117 min. N (RS)

The Metropolitan Opera: Werther Encore is a high def broadcast of the Met’s new production of the Massenet opera, starring Jonas Kaufmann in the title role. 195 min.

National Theatre Live: The Curious Incident of the Dog in the Night-Time Encore is a broadcast from London of this adaptation of Mark Haddon’s best-selling novel about an autistic boy who searches for the killer of his neighbour’s dog. 165 min.