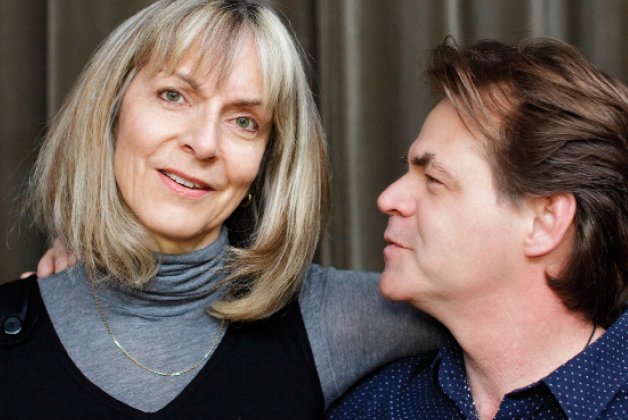 A belligerent Irishman walks into the Dublin office of a quack English therapist and asks him to help him learn to sing like famed 20th-century Italian opera tenor Beniamino Gigli.

Sound like the set-up for a shaggy dog story?

Nope, it’s the start of The Gigli Concert, by Irish playwright Tom Murphy (A Whistle In The Dark). Though it sometimes goes for laughs, the play explores the importance of art and beauty. Finding those things in our lives isn’t always easy, but it’s worth the struggle.

“We’re discovering that worth as we work on the play,” says director Nancy Palk.

In their series of six sessions, the unnamed Irish character (Stuart Hughes), a rough building contractor, hopes the somewhat dishevelled, loquacious Englishman, JPW King (Diego Matamoros), can give him the pipes of the celebrated singer.

“King calls himself a dynamatologist and belongs to an organization that believes anything is possible as long as you follow your goal to its end. That’s something we’re keeping in mind as we work on this sometimes dense script.”

Just as King has his secrets and surprises, the Irishman we meet in the first scene isn’t the fellow who reveals himself over the course of the play.

“During his life he’s hardened both on the outside and the inside,” says Hughes, who most recently worked under Palk’s direction in last year’s True West. “He’s had to to survive in the world and with his family, but the result is a squelching of his true genius and spirit.

“Over time that spirit needs to be released, given breath. At his core the man is sensitive and tender, and those qualities finally erupt.”

While the aspiring singer is a successful businessman who feels he has to behave a certain way to be respected as a construction mogul, King has achieved nothing in his life, says Palk.

“King drinks too much, has been shipped off to Dublin by his employers and has done very little. He’s clearly highly intelligent though technically uneducated despite his time in an upper-class boarding school.

“What’s wonderful about the chemistry between the two is that although one comes as a client to the other, they have similar personal things to work on and end up becoming friends. Even in the first scene, they both wonder how they’re going to get through the day.”

“And they end up sharing on an equal level,” adds Hughes, “even though there’s so much dissension between them. Over the course of time they reveal more and more, finally healing each other and themselves.”

The tension between the men isn’t the only source of drama in the play. King has a lover, a married woman named Mona (Irene Poole), who helps ground him, though an element of mystery informs her actions.

The playwright has carefully inserted recordings of Gigli singing.

“The music functions as great underscoring of the action, and it’s also wonderful for scene changes,” smiles Palk, who used to sing some of the same songs when she studied voice.

“It informs the language of the play,” continues Hughes, “and Murphy’s been shrewd about when and where to use specific tunes.

“One day when Irene and I were sitting backstage listening to the melodies, she mentioned that we don’t have to work so hard because the music sets everything up for us.

“If you let it bleed into you, whether the resulting feeling is joyous or painful, the effect is a little move in the direction of perfection, toward an expansion of our humanity.”

Why Gigli rather than another opera singer: