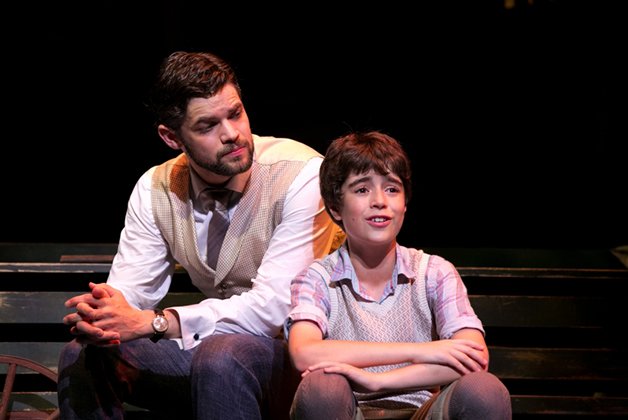 BOSTON – Like the three Darling children in J.M. Barrie’s Peter Pan, who need to “think lovely wonderful thoughts” as well as be sprinkled by Tinker Bell’s fairy dust before they can fly to Neverland, I hoped to have only the best of thoughts about the musical version of Finding Neverland, based on the charming 2004 film starring Johnny Depp.

The musical, premiered at Boston’s American Repertory Theater (A.R.T.), has lots going for it on paper. In recent years, the company was the launching pad for Broadway productions (and Tony winners) Pippin, the Gershwins’ Porgy And Bess and All The Way. The well-respected Diane Paulus, who directed Pippin and Porgy, also helms Finding Neverland, while book writer James Graham and composer/lyricists Gary Barlow and Eliot Kennedy have serious U.K. creds.

The show is set for an April opening on Broadway, and those involved hope it will do the same kind of business as previous A.R.T. productions. I hope that what arrives in New York is stronger than the version I saw toward the end of its Boston run.

The musical follows successful playwright Barrie’s relationship with the Llewelyn Davies family, a widowed mother and her four sons. The imaginative playfulness and trust that develops between the family and Barrie is at the show’s heart, and it’s nicely captured in the chemistry between Barrie (Jeremy Jordan) and the mother, Sylvia (Laura Michelle Kelly). That emotional link is also there in the growing closeness between Barrie and the stubborn, isolated Peter (Aidan Gemme), who gives his name to the central character in Peter Pan.

Barrie needs another London stage hit, as his American producer, Charles Frohman (Michael McGrath) reminds him, and it’s a hard sell to convince Frohman and his company of actors that the tale of Peter, the lost boys and a one-handed pirate can win over adult audiences.

Just as important is the romance between Sylvia and Barrie. The two have several of the show’s best numbers, Sylvia’s Lullaby and Neverland there’s a sweetness and believability in Jordan and Kelly that ring true. Too bad, though, that Jordan loses his Scottish accent whenever he sings.

The collaboration between Jordan and Gemme also works, touching the emotions the way little else in the story does. Many of the other characters – among them Barrie’s controlling wife (Jeanna de Waal), Sylvia’s snobbish, commanding mother (Carolee Carmello), the well-to-do peer who gets involved with Barrie’s wife (Tyley Ross), and McGrath’s troupe of actors – are only sketched in.

The staging could be more inventive, too. Most scenes feel driven under Paulus’s direction, while Mia Michaels’s choreography in the musical numbers is likewise heavy-handed. High energy alone doesn’t create memorable theatrical moments. The vigorous ensemble number Circus Of Your Mind is a nightmare in several senses, and Play, a pub scene in the second act, feels like filler.

Still, there are a few standout episodes: the appearance of Captain Hook, his ship and pirates at the end of the first act, and the magical scene in which Sylvia herself goes to Neverland.

There’s a Toronto tie-in to the production that most people in the States wouldn’t be aware of. Canadian performer Ross was nominated for a Dora Award a decade ago for The Last Five Years at Canadian Stage. Jordan took on the same role in the recent movie version of the musical and, on his day off from Finding Neverland, flew (by plane rather than fairy dust, presumably) to Toronto for its launch at last month’s TIFF.