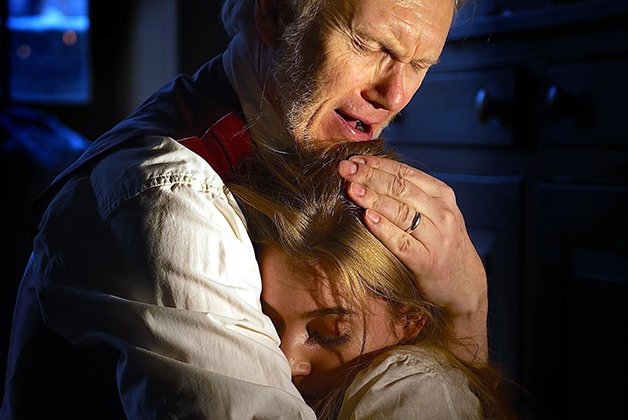 The family of William Lyon Mackenzie, one of the most colourful figures in Canada’s history, were an incendiary bunch.

That’s the lesson we learn in Firebrand, Alex Dault’s clever look at the last years of Mackenzie’s life, when the publisher/politician/revolutionary returned to Toronto in 1850, deeply in debt, after a dozen years in exile in the United States.

Single Thread Theatre’s production isn’t mounted in a conventional theatre but, in a fine flourish, takes its audience through Mackenzie’s Bond Street house (now a museum).

Under Jonathan Langley’s direction, Greg Campbell puts a strong stamp on the Scottish Mackenzie, a staunch Presbyterian who denies his excitable young daughter Isabel (Caroline Toal, occasionally too contemporary in feel), any joy at Christmastime that’s for those frivolous Catholics and Anglicans, who follow pagan traditions. Just as ardently, he demands that the government pay him the money he feels owed for his confiscated property and work in England and on the Welland Canal. A passionate champion of reform, he never believes that others are as dedicated as he is.

Though himself a rebel and hothead in the public’s estimation, Mackenzie isn’t happy having a rebel within his own family. Dault’s research revealed that his elder daughter Barbara (Clara Pasieka, in a fine performance) was diagnosed with what was called monomania the playwright defines it here as pyromania, and her condition and the sensuality she draws from flames become central to the narrative.

The scene in which she meets a lover and is discovered and punished by her father is one of the play’s strongest. Pasieka, who floats through the action as the audience’s ghostly guide, is fascinating to watch, while Campbell’s stern father metes out a justice that today wouldn’t be condoned.

The rest of the cast is also believable. Michael Rawley captures the gruffness and prickly quality of James Lesslie, Mackenzie’s associate, forced to deal with a difficult friend, while Burgandy Code as Mackenzie’s wife, Isabel, is the play’s one practical figure, a woman who does her best to ground her family in the real world. Jakob Ehman’s several characters, including a portrait painter and Barbara’s lover, are nice cameos.

Dault works a lot of historical material into the story, never reducing it to schoolbook instruction but rather telescoping it to fill out characterizations and move the plot forward. He’s also added a few sly references to today’s events (Mackenzie notes that “a wild hog could be mayor [of Toronto] and no one would notice”) that make us smile, but he also drops in the occasional phrase (“messed up,” for instance) with too modern a feel.

The action makes effective use of the house, especially in the kitchen scene, situated half a floor below ground level. We see characters running by the windows and at one point entering through one it’s almost shockingly incongruous to see an airport bus drive past the house.

Lighting designer Mikael Kangas contributes to the period feel by relying on candles as well as a few strategically placed spotlights. The audience is so close to the action that we don’t miss much even in dimly lit scenes.