Groups had high hopes for Liberal change after the Harper decade, but instead say there wasn't proper consultation on the Liquefied Natural Gas megaproject – which could result in an act of cultural genocide, destroying the estuary that is critical for salmon 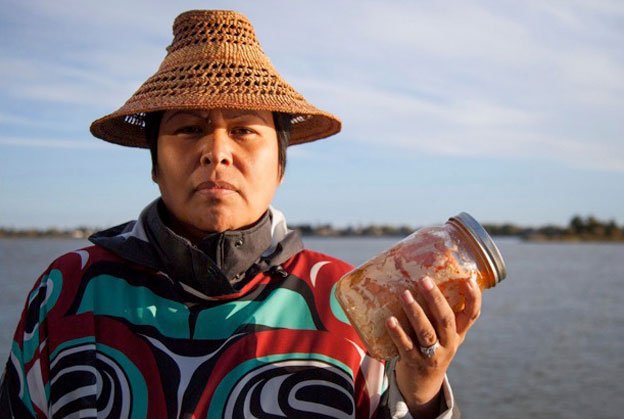 A Trudeau team that places great stock in images of cooperative collaboration and transparency was smarting last week.

Those constituencies, which had high hopes for Liberal change after the Harper decade, were astounded at the lack of consultation on a project that some say could result in an act of cultural genocide, destroying the estuary that is critical for the growth of 300 million salmon every year.

Jonathan Moore, Liber Ero research chair in coastal science at Simon Fraser University, explains, “This is where they go through their puberty transition from freshwater to saltwater.”

Last May, more than 130 scientists wrote to Environment Minister Catherine McKenna, declaring that “a worse location is unlikely to be found for PNW LNG with regards to potential risks to fish and fisheries” on the ecologically fragile Flora Bank of Lelu Island.

Despite widespread concern about the catastrophic impact of the proposed LNG processing plant on the island, neither Indigenous representatives nor green groups were invited to the September 27 press conference to announce the project, held in a remote fenced area near the Vancouver airport, despite what the government characterized as exhaustive consultation.

Instead, a small media cluster recorded BC premier Christy Clark and a handful of Trudeau cabinet ministers, including McKenna (Environment), Jim Carr (Natural Resources), and Dominic Leblanc (Fisheries), touting what they said was a win-win project, complete with 190 binding conditions.

Their picture-perfect press conference, however, was unprepared for questions from unexpected gatecrasher Christine Smith-Martin, a member of the Gitwilgyoots Tribe of Lax Kw’alaams, who arrived in ceremonial regalia with a jar of salmon and her drum.

“Somebody had to speak up for the salmon,” Smith-Martin says over the phone from BC. “I just couldn’t sit back and let them think that it’s all right.”

Salmon makes up 40 per cent of the Gitwilgyoots Tribe’s diet. But Smith-Martin’s concerns were brushed off in the same manner as those of a senior-level delegation of BC hereditary chiefs who were left high and dry earlier that day in Ottawa, where they had gone to meet the same ministers, only to find out at the last minute that their meeting was cancelled.

When Wet’suwet’en Nation Chief John Ridsdale called home to report on the fruitless Ottawa trip, his fellow chiefs were furious.

“They were saying, ‘They [Trudeau government] owe you a feast. You’re a high chief, we have 22,000 square kilometres of territory, and they just left you there after you travelled across Canada?'” he recalls.

Ridsdale, who along with Smith-Martin had been at the United Nations last May when the Trudeau government was applauded for signing the Declaration on the Rights of Indigenous Peoples (UNDRIP), says the feds have made no formal apology nor followed up since.

The LNG project has long been a flashpoint in BC, and 350.org’s Stop It At the Source campaigner Clayton Thomas-Muller was unsurprised by the announcement, situating it in the broader context of the Liberals’ commitment to getting fossil fuels to tidewater and their aggressive pursuit of trade agreements. Thomas-Muller says LNG approval “was a test, seeing what kind of damage this will do to their social and political capital” ahead of more controversial decisions – namely, Kinder Morgan’s Trans Mountain pipeline and TransCanada’s Energy East pipeline expansion.

Thomas-Muller grew up in the salmon-rich Skeena Valley and remembers that “one of the ways I would get away from the racism in Terrace Bay, which was not a nice place for a Cree Indian from Winnipeg to grow up, was to take off into the bush with my dog and go fish for salmon in all the tributary rivers. It was a powerful experience.”

Critics warn that that intimate connection to salmon, along with an industry that employs 55,000 non-Indigenous fishers, is threatened by a project whose promises of clean, safe energy drilling, production and export in one of the most vulnerable ecosystems imaginable don’t square with reality.

Moore and other independent scientists have written reports and peer-reviewed scientific papers echoing a 1973 federal government study on the impact of a super-port in the area that concluded it “would destroy much of this critical salmon habitat.

“You cannot overstate the importance of salmon to the coastal communities,” Moore says. “You drive along the Skeena, and there’s people congregating at the gas stations, the hotels are full of anglers, rental trucks and campers with people from all over the world there to get a chance to catch a big Steelhead or Chinook salmon. You smell the smoke where First Nations are putting up the fish for the winter.

“Then there’s commercial fishing and school groups and tourists taking pictures of salmon or bears. This drives the ecosystem and the economy and culture of the area. It’s deeply embedded in the identity of this place and the people.”

Apart from concerns about pipeline ruptures and the well-documented dangers of fracking (hydraulic fracturing to extract shale gas), scientists and First Nations agree that the blasting and dredging required to build the LNG terminal on Lelu Island would irreparably damage the estuary that serves as a key salmon nursery.

They say the 190 conditions celebrated by the federal government set the bar far too low, ignoring contemporary science and data that document the unsuitability of salmon to areas marked by industrial development. These provisions rely far too much on monitoring by environmental agencies that were gutted during the Harper years.

“Every time I hear them talking about mitigation, to me that means they know they’re going to be doing damage,” says Ridsdale, adding that anything posing such a grave risk to such a cornerstone of Indigenous culture has genocidal implications.

“Our clan names, our feast and house names all relate to the environment around us, the salmon, the animals, and if there is any change to that, what happens to our thousands of years of names, our stories and history? If you change one thing, it will change everything, and once it’s gone, it’s gone forever.

“When we jar the ocean fish and put the river fish into the smokehouse for the winter, that is storytelling time, when we pass along our ancestors’ stories and wisdom. That is irreplaceable. And they think you can put a monetary value on something like this.”

“It’s almost like they are okay starving us out,” Smith-Martin laments.