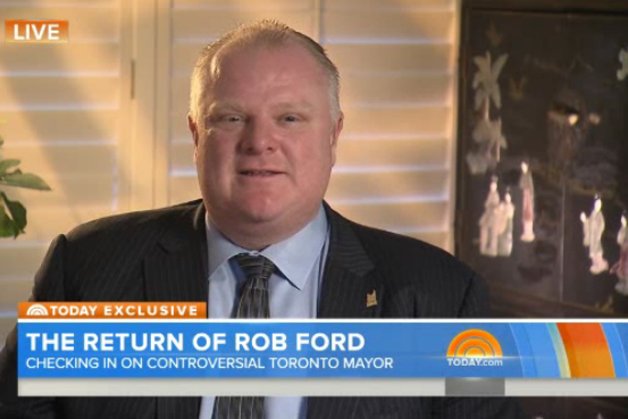 Rob Ford made a surprise appearance on U.S. television on Tuesday morning, sitting down for an interview with the Today Show’s Matt Lauer on NBC.

Lauer spoke to Ford back in November right after council revoked his powers, and at the time was one of the mayor’s toughest interviews. But anyone hoping for a reprise of that grilling was disappointed Tuesday. Instead Lauer was soft, invited Ford to gloat about Canada’s Olympic hockey performance, and failed to call the mayor on several mistruths:

Lauer asked Ford if he has remained effective since council drastically reduced his authority last fall. Ford replied “absolutely” and claimed he had led the charge in restoring electricity after the December ice storm, instituted “the lowest tax increase over the last three years,” saved the city hundreds of millions of dollars, built subways, scrapped the car registration tax, and finalized an unprecedented union deal.

Now, each of these claims deserves its own fact check, but only one of them (his response to the ice storm) was something he did after he was stripped of his powers. The elimination of the vehicle registration tax happened all the way back in December, 2010, his first month in office.

Lauer asked Ford directly if he had “used crack cocaine or any other illegal drug” since their November interview. The mayor responded “I don’t use illegal drugs. I experimented with them, like, a year ago, but I don’t use drugs.”

First, his use of the present tense (“I don’t use illegal drugs”) is identical in formulation to his famous May 2013 denial of the initial crack allegations (“I do not use crack cocaine”). As we later found out, this did not mean that he had not used crack. That he used the same response to Lauer should hardly reassure anyone that he has not used drugs over the past three months.

Second, while it’s troubling that Ford would view midway through his first term as an opportune time to “experiment” with hard drugs, the idea that the crack video was the only time Ford used the drug has been refuted. The Toronto Star’s Robyn Doolittle wrote in her book Crazy Town that the mayor first started taking crack after the 2006 death of his father.

Ford’s non-denial is also caleld into question by a report in the Star earlier this month that a witness saw Ford enter the bathroom of a Coquitlam, B.C. bar and emerge an hour later making “twitch-like movements” and talking gibberish.

After swearing up and down last year that he would never touch a drop of alcohol again, Ford admitted to Lauer that he has resumed drinking. “Have I had a drink? Yes I have,” he said. “But not to the point of some of the episodes before. So you know what, that’s past me.”

It’s difficult to compare the mayor’s level of inebriation by simply looking at videos, but certainly the speaking-in-tongues footage from the Steak Queen indicates he sadly reached a state of intoxication that night that rivaled his previous episodes of public drunkenness.

“I drank, and I enjoyed myself. I think it was a Friday, I can’t remember what night it was,” Ford said of the Steak Queen incident. In fact, the mayor was publicly intoxicated at the Etobicoke restaurant on Monday, January 20. He arrived at City Hall the next day around 2 p.m., and his staff would not say where he had spent the morning.

5. There are slightly fewer people lining up to replace the mayor

In the long list of Ford Untruths this is a minor entry and an understandable mistake for the mayor to make. But Ford told Lauer “I’ve got 34 people registered against me” in the 2014 election. For the record there are currently 31 candidates registered to run against the mayor.