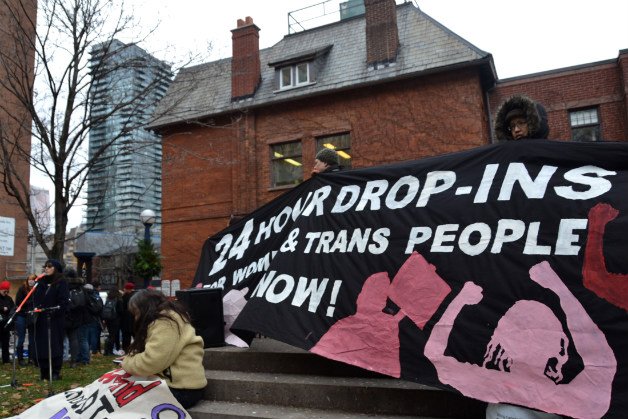 Five women have been arrested at a Shelter Support and Housing Administration office during a protest against the lack of facilities for homeless women.

On Tuesday afternoon more than 100 people marched on the SSHA building at 21 Park Rd. chanting “safe space now!” and demanding more shelter beds and a 24-hour drop-in space for women and trans people. The demonstration was organized by the Ontario Coalition Against Poverty and coincided with the International Day for the Elimination of Violence Against Women.

The march began at a park a few blocks away, and when the large group arrived at the SSHA office, five protesters were already inside and could be seen sitting at the window of the lounge of the red brick building. Several police officers were also inside but made no move to remove the group.

For about two hours protesters gathered in a small park next door made speeches and sang songs. Then at about 2:15 pm, the five women inside were arrested.

Speaking to NOW from the back of police wagon bound for 53 Division, protester Liisa Schofield alleged police had physically thrown her to the ground and called her a gender-specific expletive, and that her thumb had been injured in the arrest.

The supervising officer at 53 Division did not immediately return repeated requests for comment.

The names of all five taken into custody were not immediately known, although in addition to Schofield OCAP organizer Zoe Dodd was among those occupying the office.

Mike Leitold, a lawyer for the group, confirmed that the five are being charged with mischief and trespassing. He didn’t say when they would be released.

Asked whether department staff had requested police arrest the women, SSHA spokesperson Patricia Anderson said the Park Rd. office “is not a public building” and that clients who meet with staff there are “very vulnerable.” She referred all other questions to the police.

Tuesday’s protest was spurred by frustration over lack of action on homelessness initiatives that have already been approved by council.

Following repeated protests by OCAP and its allies, council voted in April 2013 to lower shelter occupancy rates to 90 per cent in order to ease overcrowding. But almost 20 months later little progress has been made on Tuesday, shelters in all sectors were at 94 per cent or higher.

A plan to open Toronto’s first 24-hour drop-in space for women has also stalled. The facility was supposed to open next month but has been pushed back to sometime next year, thanks to a bureaucratic delay that prevented the issue from going to council for a final vote before the municipal election.

“We won, so why are we still here asking for safe space?” asked Judy Hyndman, a community outreach worker at Regent Park Health Centre, whose voice shook with emotion as she shouted to the crowd through a microphone.

Hyndman, who was homeless herself until about 10 years ago, said that a lack of proper facilities was putting street-involved women at risk for sexual violence.

In an email to NOW, the SSHA’s Anderson contended that “the system is operating well given that demand is higher. City and agency staff on the front lines are continuing to provide services and accommodate clients in a professional and compassionate manner.”

But she acknowledged that “demand for shelter beds is growing” and finding permanent accommodation for homeless people is increasingly difficult because of a shortage of affordable housing.

“Permanent, affordable and appropriate housing, along with the necessary supports, is the solution to homelessness,” Anderson said.

The SSHA plans to present options for achieving the 90 per cent occupancy target to the new term of council in early 2015. Anderson says possible strategies will include finding housing for long-term shelter clients as well as opening up new shelter beds.