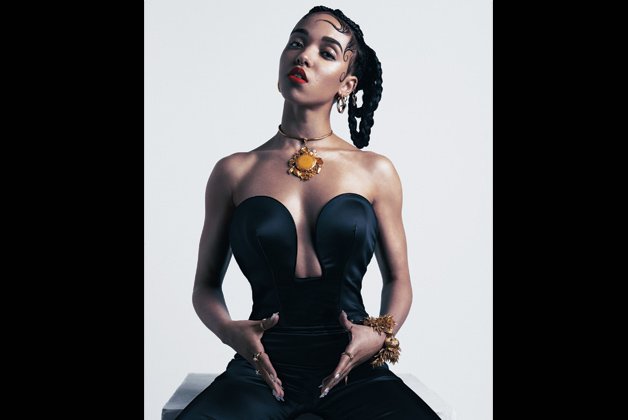 The mountain of buzz was just starting to build around FKA twigs’ first EP of ethereal R&B last year when the British artist was forced to add the “FKA” to her long-time nickname. Turns out there’s an American pop duo called the Twigs, and they complained. Given how much explaining her moniker takes, you have to wonder why she didn’t just revert to her birth name, Tahliah Barnett.

“It just seems like a very singer’ name, and I don’t really consider myself a singer in that way,” she explains from her London apartment.

“FKA twigs suits the project more because it’s short, it’s to the point, it’s got loads of consonants in it. FKA twigs could be a boy, could be a girl, could be a pet. I could be a panther, a lion in a zoo, a monkey. It could be a nightclub or a cafe.” The tone of her voice moves from glamorously bored to a subtly poetic singsong rhythm as she rattles off the possibilities.

The irony is that for all its menacing electronic textures, the focal point of her experimental pop is very much her airy falsetto, sparkling with reverb and dancing above the clattering percussion and sub-bass rumbles.

Her upcoming debut full-length, LP1 (XL/Beggars), easily lives up to the promise of her first two EPs, although it includes none of the songs from those earlier releases. She was too excited about taking more control of the production on her newest batch of songs, and eager to get them out.

But even as she throws herself more into recording and touring, she’s also still directing and conceptualizing her videos, and gives the impression that she’s a bit of a control freak – a characterization that makes her bristle.

“What’s the opposite of a control freak? Someone who doesn’t write their own songs? Who doesn’t produce their own music? Who doesn’t direct their own videos? What is that person? I think I’m just an artist who likes to work really hard and be the best that I can be.”