NOW MagazineNewsFLAPs fight for feathered friends on display at ROM

FLAPs fight for feathered friends on display at ROM

The bodies of more than 1,800 migratory birds killed in the past year from flying into Toronto buildings were on. 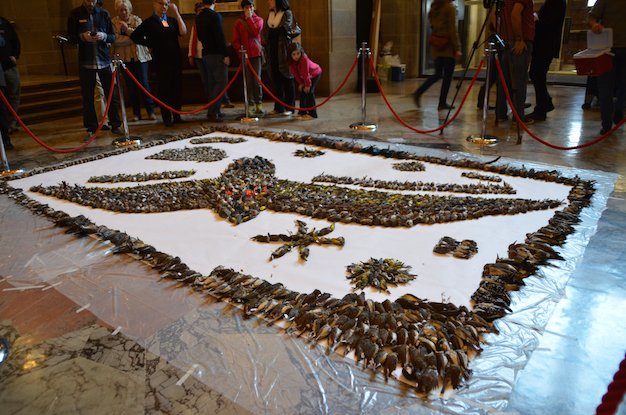 The bodies of more than 1,800 migratory birds killed in the past year from flying into Toronto buildings were on display Friday at the Royal Ontario Museum (ROM) to raise awareness of the issue that greatly affects bird populations worldwide.

Everyone needs to know about this problem, said Michael Mesure, founder and Executive Director of the Fatal Light Awareness Program (FLAP) Canada, the organization behind the three-hour event.

He explained that for every building in the Greater Toronto Area, between one and 10 birds die annually by flying into its windows.

So there is anywhere from a million to 10 million birds just colliding in the GTA, he said. Many of them are at-risk species.

The effects of plummeting bird populations could be an increase in insects and a decrease in plants being pollinated and seed distribution, among other problems, said Mesure.

Toronto, like many metropolises, lies within a major migratory route. Its myriad of glass buildings can confuse birds, causing them to become disorientated and collide into the sides of skyscrapers.

Roughly 70 FLAP volunteers search the city during the spring and fall migratory seasons for these fallen birds before they are found by building maintenance workers or predatory animals like cats and raccoons.

Fortunately, not all birds found by FLAP volunteers last year ended up in the exhibition.

What you dont see, said Mesure, are the roughly 1,000 birds we rescued and rehabilitated and released, continuing that along with advocacy and rescue operations FLAP is working with the city to ensure that new buildings meet bird-safety criteria.

Mark Peck, the ROMs ornithology collections manager, said he hopes the event will publicize the impact windows and buildings have on bird migration and populations.

Its a very important event, he said, adding that by collaborating with the ROM most of the birds in the exhibition will be given something of a second life.

About 25 of the birds displayed will find a home in the ROMs permanent collection, he said, with the others going to universities or research institutions.

For more information on FLAP or how to bird-proof your windows, visit its website here.