NOW MagazineNewsFlight of the conflicts

Flight of the conflicts

If John Tory were mayor, he could be legally prohibited from weighing in on the Island airport 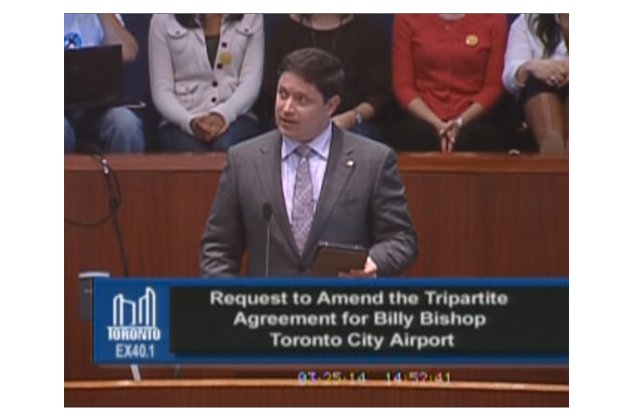 “You look different,” said Councillor David Shiner, chairing a meeting of council’s executive committee, as a man named John Tory approached the microphone to depute on the potential expansion of the Billy Bishop Toronto City Airport.

It was not the famous, familiar John Tory – the businessman, broadcaster, former chair of CivicAction and current candidate for mayor of Toronto.

“Are you running for mayor?” asked Shiner with a smile.

“I am not,” said this Tory, who was speaking as president and CEO of Private Air Inc., an executive aircraft charter company based out of the airport.

If the elder (John H.) Tory were to become mayor, it is quite likely that his son’s business affiliations would prohibit him from weighing in on the matter of the Island airport, the push to expand it and Porter Airlines’ plan to fly jets from it. Given council’s Tuesday decision to pursue negotiations and further studies, the final vote on expansion will be left to the next term.

It would be significant if the new mayor of the city were unable to provide leadership on the issue. On the other hand, a politician might be relieved to have a perfectly respectable reason to refrain from wading in to an obviously divisive debate.

The pertinent provincial law is fairly clear. The Municipal Conflict Of Interest Act (MCIA) says that if a member of council or his or her child, parent or spouse “has any pecuniary interest, direct or indirect,” in a matter before a meeting of council, that person is to disclose it and excuse him- or herself from any discussion or vote on the item. He or she also “shall not attempt in any way whether before, during or after the meeting to influence the voting on any such question.”

There is limited leeway in the prescribed penalty for violating the act. If a voter brings a court application alleging a contravention, and a judge agrees that a conflict was neither remote nor accidental, the judge is to declare vacant the office of the violator. Mayor Rob Ford found himself on the losing end of such a ruling in November 2012 for having voted on a motion to reverse an earlier council decision ordering him to repay money he’d solicited from lobbyists. (The Superior Court ruling was later overturned by the Court of Appeal on technical grounds.)

Municipal lawyer John Mascarin, a partner at Aird & Berlis, believes the Tory situation would likely constitute a conflict were the elder to become mayor. “Under the MCIA, a member has a deemed pecuniary interest if their child (even an adult child) has a pecuniary interest,” he writes in an email. “If Mr. Tory’s son would stand to benefit from the expansion of the airport, then Mr. Tory would have an obligation under the MCIA to recuse himself from participating, influencing the vote and actually voting on any matter before city council or committee of council.”

“Provided, of course,” Mascarin adds, “that the interest of Mr. Tory is not so insignificant or remote as to be unlikely to influence his vote” and as such fall under the act’s exemption for extremely minor interests. “The objective reasonable person test requires a consideration of all the circumstances.”

In his March 25 speech to the executive committee, the younger (John A.D.) Tory was unambiguous about whether he and his company would stand to benefit from a proposed expansion. “Billy Bishop is a vital part of the waterfront strategy,” he said. “It’s not just an economic engine and viable revenue source for the city it’s also my income, my job and that of thousands of airline sector colleagues.” He asked that council adopt the staff recommendations that would set a gradual course toward expansion.

The younger Tory, who helped steer Sarah Thomson’s 2010 bid for mayor, is also a registered lobbyist on this issue. According to the Lobbyist Registry, he sent emails to 17 councillors on December 4 and met with Deputy Mayor Norm Kelly and his chief of staff on January 7. In the email, of which NOW obtained a copy, he stated that “reasonable expansion and support from the city will greatly enhance business opportunities for Private Air and other general aviation operators.”

And Porter, he wrote, is “a customer of Private Air’s, using our on-demand capability to address short-notice travel needs. We are proud to have Porter as a landlord, as a customer and as a leader in the aviation community.”

Asked following his deputation whether his business relationships might affect his father’s ability to consider the issue should he become mayor, the younger Tory told NOW, “That is a long way away. I do know that whatever the guidelines or even the notions of integrity suggest, he would do the right thing. But we’ve got a lot of months to go before we start encountering those hypothetical scenarios.”

Had he discussed this with his dad? “No. Not in particular,” he said. “I mean, he knows where my office is. But I have not discussed any of that type of scenario that you envision. Just cuz [we’ve got to] get there first, right?”

Candidate Tory’s official position on airport expansion is that serious consideration should be deferred until “dozens of unanswered issues” are resolved. Until or unless he is elected to office, he can take whatever public stance he wants.

But his campaign rejects the suggestion that he might find himself in a conflict-of-interest situation were he to become mayor. Asked if a future Mayor Tory would declare a conflict and recuse himself from Island-airport-related items, the campaign dismissed the line of inquiry.

“Frankly, this question is ridiculous,” said spokesperson Amanda Galbraith in an email. “John Tory Jr.’s business interests are his own. They have nothing to do with John’s position on the airport. There is no conflict of interest.”