NOW MagazineNewsFlight of the passenger pigeon

Flight of the passenger pigeon

Can the passenger pigeon be brought back from extinction? How the largest collection of the stuffed birds on the planet at the Royal Ontario Museum is helping the Great Passenger Pigeon Comeback 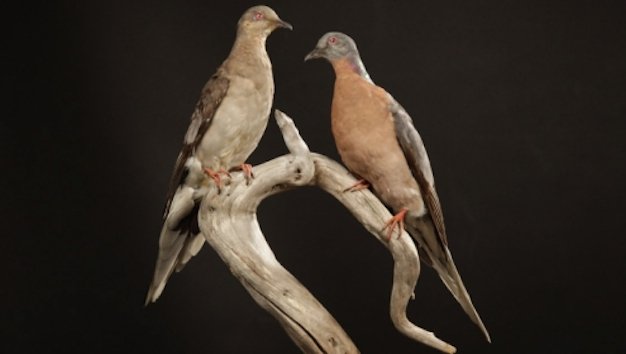 What Passenger pigeon, or wild pigeon, aka Ectopistes migratorius. Not to be confused with the rock dove (the bird known to urban dwellers as flying rats).

Last known survivor Martha, who died in captivity in 1914 at the Cincinnati Zoo.

The revival project More than 100 years after the birds’ extinction, an attempt is under way to restore the species using DNA from the skins and stuffed specimens on display at the Royal Ontario Museum, the most extensive collection of passenger pigeon remains in the world.

Seems these artifacts hold the key to reviving this once abundant bird, according to Ben Novak, the biologist behind the Great Passenger Pigeon Comeback. Novak is leading researcher at Revive & Restore, a project of the San Francisco-based Long Now Foundation to bring back endangered and extinct species. (The organization also aims to resurrect the woolly mammoth to help increase the carbon-fixing capa-city of degraded Arctic tundra).

Not just skin and feathers Novak says the birds at the ROM “are a repository of the minute Darwinian variations of evolution that allowed this bird to adapt to the changing forests of America for hundreds of thousands of years.”

Over the last two years, Novak has scrutinized the quality of 77 of the ROM’s specimens and found they “exceeded expectations” for his proposal to splice DNA into the genome of the band-tailed pigeon, the extinct birds’ closest living relation, separated from their common ancestor 22 million years ago. It will take more than a million DNA fragments to assemble the passenger pigeon genome, Novak says.

The passenger pigeon’s place in local lore The Mimico Creek watershed takes its name from the native “Omimeca,” which, roughly translated, means “resting place of the wild pigeons.”

Legend has it that their nests were so plentiful that their weight broke branches, which helps explain why pigeons were a common sight for sale in Toronto farmers’ markets at the turn of the last century.

A diorama on view at the ROM from 1935 to 1980 showed a giant flock of pigeons at the Forks of the Credit in 1860 that was reliably estimated to have exceeded 1 billion birds.

Says Novak: “Ontario is one of the few places in the world where the passenger pigeon’s presence is so inti-mately recorded that if one were so inclined, one could visit the location of hundreds of historic passenger pigeon nesting sites and roosts. At any one of these sites one could dig into the earth and discover the bones of long-dead remains of the carnage of commercial harvest and the mortality of nestlings. There isn’t a square inch of southern Ontario that was not touched by the passenger pigeons.”

The greatest mass bird extinction in history right here Margaret Mitchell’s The Passenger Pigeon In Ontario describes how farmers used torches to blind and confuse the birds, which were trapped and netted “for the American market by the thousands.”

A Toronto gun club had shooting matches where 50 marksmen were each expected to kill 300 birds a day. A stretch of land between St. James Cemetery and Bloor Street was a slaughter place known as “the Pigeon Green.”

Unlike in the United States, Mitchell’s research uncovered no organized conservation efforts in Ontario. One poignant episode she records was the unsuccessful chase in 1891 in what is now Philosopher’s Walk by a Mr. Atkinson to capture a passenger pigeon for a captive breeding program.

Where is that vanished bird? Paul Hahn, the man responsible for the ROM’s remarkable collection, is mentioned in Chicago Academy of Sciences researcher Joel Greenberg’s recent book A Feathered River Across the Sky: The Passenger Pigeon’s Flight to Extinction.

Greenberg documents how Hahn first learned of the bird in 1892 as a young boy living in Wittenberg, Germany. When the family moved to Ontario, he saw his first mounted bird in an exhibit when it was on the brink of extinction.

From 1918 to 1960 Hahn acquired 70 specimens, aided in his efforts by pio-neering Canadian environmentalist James Henry Fleming. The collection eventually turned over to the ROM included 152 birds and 10 egg sets. At the suggestion of then ROM curator James Baillie, Hahn catalogued the remains of other extinct birds around the world. These were published in his book Where Is That Vanished Bird?

Says ROM curator Mark Peck: “The value of a museum and its collections is both in the preservation of the past and in opportunities for study and related research in the future. This is one of these unknown examples of scientific serendipity… treasuring the past provides unthought-of value in the future.”