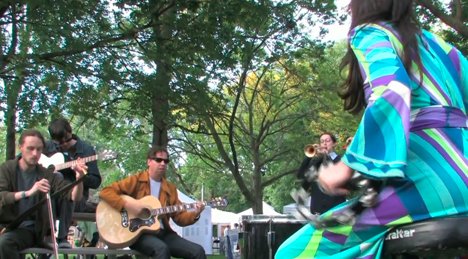 Greg Jarvis of Flowers Of Hell recently invited NOWTube to Trinity Bellwoods Park to sit in on an impromptu rehearsal.

Muchom?rky Bílé (Destroying Angel)” – accents on the u, i, and e. It is originally by the Plastic People Of The Universe, who were imprisoned by the communist regime in Czechoslovakia in the 70s for playing music inspired by the Velvet Underground, music which aesthetically violated communist artistic ideaology. The lyrics are by the Czech philosopher, Egon Bondy and are about committing suicide by wandering through the woods eating poisonous mushrooms. The song has become a modern Czech folk song, since the revoultion in 1989 in which the communists were overthrown by artists & intellectuals who’d initially come together at clandestine illegal gigs held by the Plastics.