Disappointingly, not even questions about the death of a Canadian soldier by friendly fire has managed to generate detailed public interest in what is the most complex conflict in our history 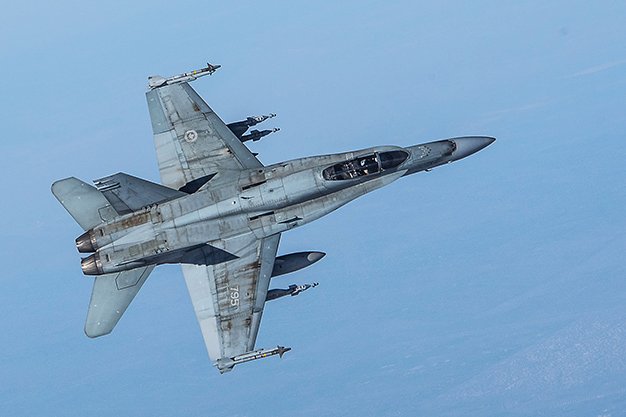 Prime Minister Stephen Harper has made it clear that his government isn’t just going to extend the current military mission in Iraq. Now he wants to carry the fight against ISIS into Syria as well.

“Let me just say the current authorization laid open the possibility of going to Syria,” Harper told reporters last week, before tabling a motion in the House of Commons Tuesday, March 24.

As with most issues surrounding the commitment of troops to Iraq, Harper’s bizarre claim went unchallenged. Canada’s only “current authorization” to employ deadly force in the region is at the invitation of the Iraqi government and the U.S., which last spring called upon allied nations to help them shoulder the burden of bombing ISIS targets, and Canada agreed to participate.

Use of force for any purpose other than self-defence requires a UN resolution or invitation from a recognized government. Some eggheads are arguing that we can legally extend operations into Syria by calling it self-defence, but that’s just war-mongering gibberish. In order for Canada to legally attack sites within Syria’s border, authority would have to be granted through the UN (as was the case in 2011 in Libya) or the Syrian government would have to request it.

The latter is, of course, impossible, because in the shortsighted headiness of the initial uprising in Syria, the Harper government declared the administration of President Bashar al-Assad “illegitimate.” That was long before it became evident that Assad was battling evil ISIS.

One might think that such previous blunders in judgment would give Harper pause before he extends and expands a military mission with no clear-cut formula for victory.

When the Canadian government announced last October that Canada would be committing troops to combat ISIS in Iraq, anyone the least bit familiar with that complex conflict knew that success was not possible within the proposed six-month timeline. If the Americans had been unable to defeat Iraqi Sunni extremists during their nine-year occupation with hundreds of thousands of boots on the ground and billions of dollars invested in training Iraqi security forces, the notion that Canada would somehow miraculously tip the balance with a few dozen soldiers advising the Kurds and six old fighter planes is ludicrous.

At best, Canada’s contribution was a tiny token of support for a U.S.-led coalition that is justifiably tentative about taking the plunge into a brutal civil war.

Canada had just been hit in quick succession by two proclaimed domestic terror attacks. On October 20, Martin Couture-Rouleau had used his car as a weapon to kill Warrant Officer Patrice Vincent and wound another Canadian soldier near the military base in Saint-Jean-sur-Richelieu, Quebec. Two days later, Michael Zehaf-Bibeau shot and killed Corporal Nathan Cirillo at the National War Memorial in Ottawa before making a mad dash to attack Parliament Hill. Both Couture-Rouleau and Zehaf-Bibeau were killed by security officers.

Politicians and ill-informed media advised a stunned public that the attackers were “ISIS-inspired.”

While nothing directly links Couture-Rouleau and Zehaf-Bibeau to the terrifying beheaders who’ve been running amok in Syria and Iraq, blatant fear-mongering is sometimes necessary to boost a government’s popularity in an election year – particularly since the Conservatives, who pride themselves on being boosters of our military, have done such a good job of botching their handling of the veterans file.

So with a public frightened of ISIS, the battle cry has become “Better to fight ISIS in Iraq than here at home.”

Using this logic and banking on the fact that Canadians know little more about the situation in Iraq than the simplistic notion that ISIS is evil, the Conservative deployment has proved popular.

One of the provisos that made going back to war in Iraq even more saleable was the fact that our ground troops were to act as trainers.

Unlike our decade-long military fiasco in Afghanistan, Iraq was to be a bloodless affair, our soldiers operating well out of harm’s way. But the Canadian Special Operations Regiment (CSOR) assigned to the task is better known for its exploits on the field of battle than as trainers. The description on the Canadian Forces website notes that “the unit proudly traces its roots to the First Special Service Force (FSSF), the fabled Canadian-American Special Forces unit that was stood-up in 1942 and earned its Black Devils moniker for daring night raids on Nazi forces at the Anzio beachhead. CSOR proudly carries the Black Devils’ battle honours, and the Devils’ spirit lives on at CSOR.”

Dutifully, the Canadian military began presenting regular technical briefings to the media to update them on the course of the war. Initially, these sessions would detail how many sorties our combat aircraft had flown and how many dump trucks or checkpoints we had blown up.

Then, at the end of January, it was revealed that the 69 members of CSOR had come under direct fire in northern Iraq. This, of course, sent media pundits and opposition members into a tizzy, since the non-combat mandate authorized by Parliament was apparently being violated.

The Harper government launched a feeble spin campaign claiming that the mission had “evolved” and that “combat” within a “non-combat” mission was not real “combat.” And it seemed to work.

What made the whole thing a non-issue was the fact that the Canadian public did not care. In fact, if our soldiers were actually engaging and killing ISIS fighters as was claimed, then Canadians are okay with that.

Not even the tragic death of Sergeant Andrew Doiron and the wounding of three fellow Canadian soldiers in what was reportedly a friendly fire incident March 7 failed to dampen popular support for the mission.

Disappointingly, Doiron’s death has failed to generate any detailed interest in what is arguably the most complex conflict in our history.

To wit, Canada is training and supporting Kurds to fight ISIS. The Kurds are fighting to create greater Kurdistan and their own sovereign state. The Kurdish forces include members of the al Qaeda Kurdish battalion (AQKB) and the Kurdistan Workers’ Party (PKK), both of which rank high on Canada’s list of terrorist groups.

An independent Kurdistan threatens to destabilize neighbouring Turkey, Syria, Iran and Armenia, all of which have sizable Kurdish minorities with active separatist factions.

Allied with the Kurds against ISIS are Iraqi Shiite militias equipped and mentored by Iranian officers. In Syria, the fight against ISIS is being waged by Assad loyalists and his allies, including Hezbollah, another well-known organization on Canada’s terrorist hit list.

Canada has no real skin in this game, and we certainly lack the military or economic means to alter its outcome.

Given that we don’t even have a clue as to what victory would look like, let alone a plan to achieve it, why are we in the playing field at all?

We should not extend – and definitely not expand – a mission in such a volatile quagmire simply to keep giving voters the false impression that Harper is keeping them safe from ISIS.

Scott Taylor is a former Canadian infantry soldier, founder of Esprit De Corps Magazine, author and documentary filmmaker. He has made 21 trips to Iraq as a war correspondent.