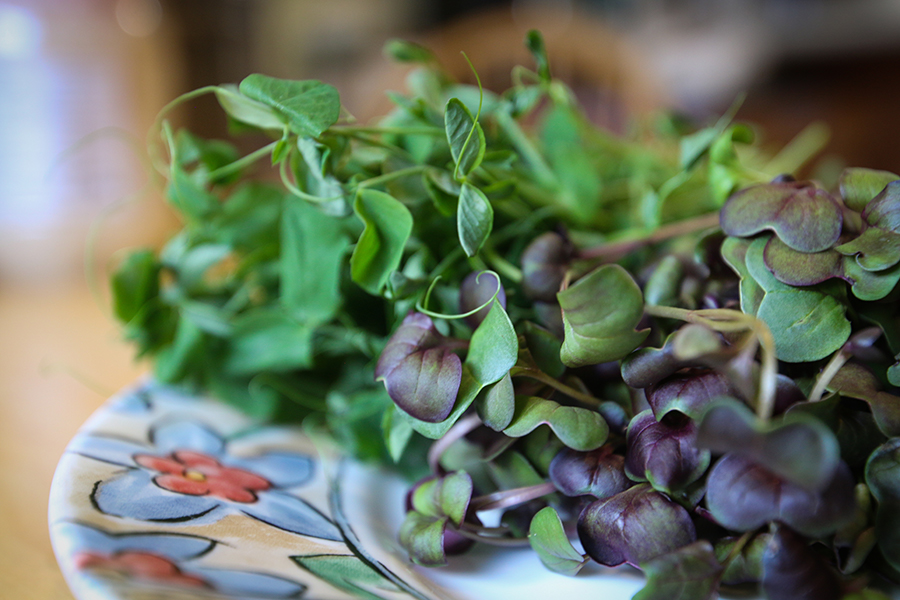 Tiny but mighty, microgreens are becoming more and more popular in Toronto’s food scene. You can find them in menu items like the salad rolls at the jungle-themed restaurant Selva and in Fresh’s chickpea and tofu steak powerhouse bowl.

These vegetables add punch, visual flare and extra crunch to a meal – and now they’re becoming more accessible to the general public.

But there’s more to microgreens than just flavour and texture, say GTA farmers. Here’s what you need to know about these young plants that are sprucing up plates across the city.

Microgreens are vegetables that grow in soil and are harvested somewhere in between the sprout and seedling stage. Unlike sprouts, these baby plants have leaves, and take longer to harvest (about seven to 10 days, depending on the plant).

These vegetables didn’t just spring out of nowhere either (pun intended). “The first microgreens – not that they would call it that – were pea shoots that were grown in Ancient China thousands of years ago,” says Dirk Kalff, founder of Junction Microfarm.

“They became popular as a garnish or as an addition to dishes in California in the 90s,” he says. “People picked it up and then it spread worldwide. And now it’s been here since forever.”

There’s a lot of variety too, says Jonah Krochmalnek, owner of Living Earth Farm, the largest microgreen farm in Ontario. From the brassicas like brown mustard and broccoli to herbs like parsley, cilantro, mint and thyme – “you can pretty much grown any plant that you eat the leaves of” to create microgreens.

Depending on the green, microgreens offer more iron, zinc, vitamin C, vitamin A, calcium and other nutrients than the adult counterpart. In fact, researchers also say that microgreens often have at least 10 times more nutritional value than the average fully grown vegetable.

“It’s a really dense way of sort of taking a vitamin pill, [except vitamin pills do not] replicate the natural phytovitamins,” Kalff says.

William Stavro, co-owner of microfarm Royale Roots, says microgreens are more concentrated with nutrients because of their maturity level. “As soon as it’s harvested, you start losing nutritional value,” he says of adult vegetables.

On the other hand “microgreen plants are very young,” Krochmalnek says. “When [they’re] young, in the migrant states they’re almost like young kids that are full of energy.”

“I can eat half a head of broccoli but I could never eat the equivalent grams of broccoli microgreens because they just have so much flavour,” he says,

And because of how little you need, Stavro says microgreens are kid-friendly. “My kid usually hates broccoli,” he says. “But now my kid loves it because they can just grab a handful of the microgreens and eat it. I don’t have to spend so much time cutting it and cleaning it.”

Can I grow my own microgreens?

Krochmalnek says that while you may not be able to grow the best quality microgreens, it is possible to grow them on your own. “It just takes soil, seed, some sort of tray to hold the soil and it really just takes off,” he says. “Anyone can definitely just buy those inputs and put it in a sunny window sill and they’ll grow.”

He also says growing microgreens is a good opportunity to learn for everyone who wants to get a green thumb. “Because the crop cycle is so short, if you do make a mistake, you can learn from it really fast,” he says. “Whereas if you’re trying to grow tomatoes outside, you have one kind of crop per season and it takes multiple years to  become an expert at it.”

If I don’t want to grow my microgreens where can I buy them?

Microgreens are now becoming more accessible to purchase at grocery stores such as Loblaws and Longos, as well as health food and organic food stores, like Whole Foods. Prices usually range from $8 to $10 per 100 grams, depending on the vegetable.

“You have to be a little bit price insensitive, you have to value your food and be willing to pay for it,” says Kalff, who also says that despite the price, you’re still using a little amount in comparison to the adult vegetable. “You can put 10 to 15 grams [of microgreens] on a sandwich that make a huge difference, and pay an extra dollar for it.”

Microgreens are also available to purchase at local urban farms in the GTA.

What can I make with them?

Microgreens aren’t supposed to be treated as a dish, but rather as an extra crunchy and flavourful embellishment for savoury dishes.

Most microgreens don’t “withstand a lot of heat,” Stavro says, so he usually treats his microgreens like a garnish and incorporates them in sandwiches, wraps, salads and smoothies.

Kalff says a lot of his customers use microgreens in pizza and quiche.

Am I supposed to wash my microgreens?

Ideally speaking, if the farmer cut the microgreens correctly, you don’t need to wash them, says Kalff.

“You want clean cuts where you don’t get any soil,” he says. “If some people want to wash them then that’s fine. But the leaves are so delicate that they don’t take kindly to washing.”

Stavro says because the microgreens are relatively fresh in comparison to adult vegetables you get at the grocery store, it’s not necessary to wash them.

“Something from the grocery store has been through multiple stops, multiple hands have touched it and a lot of times, things are on the floor,” he says.