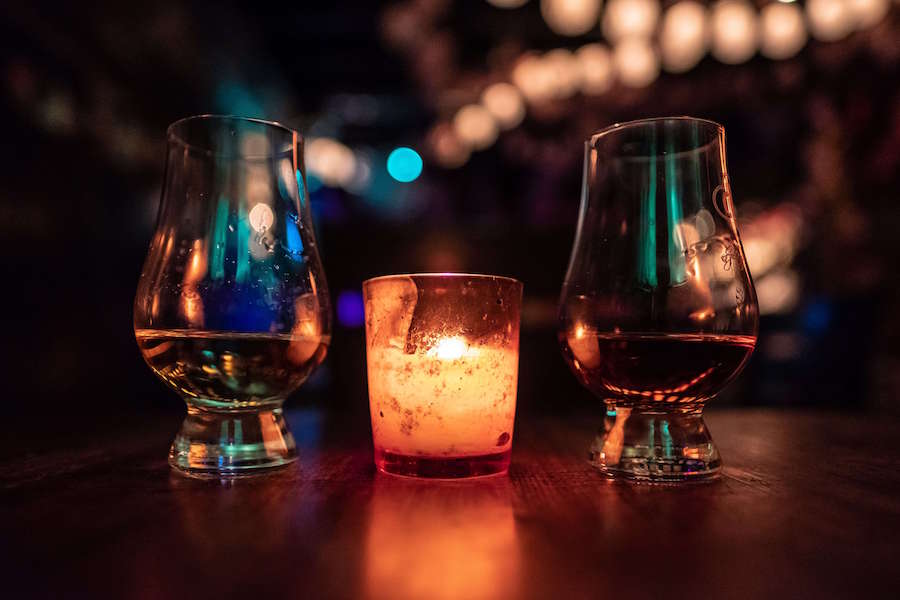 Canada is home to Glasgow-raised Bryan Simpson these days, but when it comes to liquor there’s little doubt where his allegiance lies.

“For me, I truly believe that Scotch whisky is the best drink in the world,” states the proudly Scottish brand ambassador for Ardbeg and Glenmorangie, speaking on Zoom from his adopted base of Toronto. “I think there’s a huge amount of history and heritage that kind of goes in line with Scotland.”

Some of those things – kilts, haggis, and caber tossing – haven’t exactly taken root around the globe. Scotch whisky most certainly has.

“The community of people around the world who love Scotch whisky is phenomenal,” Simpson says. “I don’t really know any other type of spirit where you’ll get these passionate fans. They’ll follow whisky from Scotland in the same way that people will talk about their favourite band –merchandise and all. I’ve seen people in my travels across Canada with Ardbeg tattoos.”

For reasons that have everything to do with heavily peated offerings from Ardbeg, Laphroai, and Lagavulin, Scotch is often considered a liquor for advanced imbibers. Like oysters, caviar, and sea-urchin sushi, it’s something that requires a bit of working up to.

But Simpson notes that not all Scotch has the kind of smokiness made famous by distilleries in Scotland’s Islay region. For those who want a drink that lets them play connect-the-dots with American, Canadian, and Irish whiskies, Glenfiddich, the Balvenie, and Glenmorangie are easy to appreciate.

“Flavour-wise, Glenmorangie and Ardbeg are on opposite sides of the flavour spectrum,” Simpson says. “One of the lines you’ll have in Scotch whisky is if the whisky is going to be peated or unpeated­—smoky, or not smoky. All Glenmorangies are unpeated. All the Ardbegs are heavily peated.”

Let’s do a quick Scotch-whisky guide for dummies. First, peated whiskies. The process starts with barley that is steeped in water and then heated up right before germination starts.

“Hot air is used to dry the barley,” Simpson relates. “Underneath where the barley is drying there’s peat, which gives off a huge amount of smoke which kind of wraps itself around the barley. It’s not enough to dry the barley – it’s just to add a smoky flavour.”

As for unpeated whiskies, there are different varietals. Grain whisky can be made from corn, wheat, or barley. Malt whisky comes from 100-per cent malted barley­. When it’s from a single distillery, it’s single-malt, whereas blended malt whisky is a mix from different distilleries. Blended Scotch makes up over 90 per cent of all Scotch whisky sold.

A single-malt Scotch whisky has to mature for a minimum of three years in oak casks, where it picks up subtle flavours.

Peated offerings often skew perspectives of what Scotch whiskies are.

“When it comes to unpeated single-malt whiskies, I personally think they get a bad rep,” Simpson offers. “A lot of people think it’s going to be a strong spirit. But some of the most popular brands of North American whisky are actually more aggressive than what you’ll get with a Glenmorangie, which is very approachable.”

As with many things in life, the more you push yourself, the more you’ll be open to new experiences. Cocktails are a great way to ease yourself into things.

“When it comes to cocktails, you don’t have to use too much. Some people want the smoke, but not necessarily the intensity of having it neat,” Simpson says. “Then, once you get used to having a smoky cocktail, you can work the back end to having it neat with a little bit of water or maybe over ice­ – whatever it takes to get over that hurdle.”

And even if you’re not quite ready to tackle that hurdle, it’s okay. There’s a Scotch whisky for everyone.

“I say this all the time: it’s not that you don’t like Scotch,” Simpson says with a laugh, “it’s just that you haven’t found the right one.”

Here are two drinks you can make with Scotch whisky:

1.5 oz. Glenmorangie Original 10 Year Old
1 dash lemon bitters
1 dash aromatic bitters
Top with ginger ale
Stir the ingredients together and serve in a highball glass with a twist of orange and a touch of crystallized ginger.