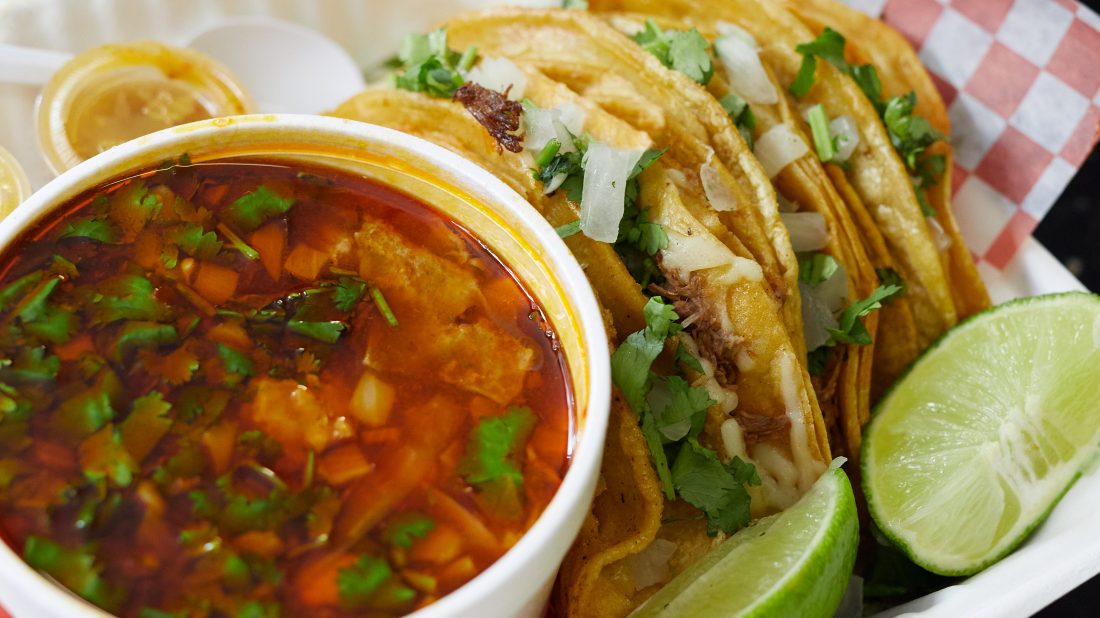 The main event, the birria tacos.

The taco stand, which has locations at two of the best hidden-gem street food markets in the city – the Latin American market at 214 Augusta in Kensington Market and the World Food Market on Yonge near X University – was one of the first spots in the city to offer birria tacos, the taco-dipping food ritual that has swept TikTok and got pounced on by at least one local celebrity chef.

Abraham Luna and Lluvia Minton came to Toronto from Mexico with a dream to open their own restaurant. In 2020, they each quit their jobs – his at a framing company and hers at a bakery – and shortly after heard about an opening for a vendor within the El Gordo market in Kensington.

“Kensington Market, it’s like a miracle place,” says Minton. “Lots of different kinds of culture, lots of people walking around all the time there. It’s like destiny to be there.”

Other spots in the city now offer birria, but Birria Catrina is the first one to offer a menu of only birria. Luna came armed with a traditional family recipe from Jalisco, where he hails from. Minton is from Chihuahua, and did some research to find how others were preparing birria. They put them together to form their own recipe, a twist on the tacos you’ll find throughout Jalisco that works with Canadian ingredients and customers.

Catrina uses slow-cooked halal beef rather than lamb and crispy tortillas for the tacos. The tacos are stuffed with meat, cheese, cilantro and onions and served alongside a steaming bowl of consommé, a vibrant beef stew broth. Like a Mexican version of beef au jus, you dip the taco in the soup and then enjoy all the intermingling flavours – a simple ritual that just feels right.

And it’s caught on, well enough that they’ve not only survived but expanded during the pandemic. It helps that both their locations have been focused on takeout from the start. But the couple credits the food and how well it works in both Mexico and Canada.

Now, in addition to the signature birria bowl and birria tacos, they also offer birria versions of tortas (sandwiches), quesadillas and pizzadillas. There’s even birria ramen. All birria everything.

Luna says when they opened the spot, they did some analytical research online and found very few people were searching for birria in Toronto. Since they’ve opened, searches have dramatically increased. Every day, they discover new TikToks and Instagram reels of people coming to Catrina, dipping their tacos and telling all their followers they’ve got to check it out.

That viral quality has caused other spots to start offering birria tacos, including local celebrity Matty Matheson, who helped launch the pop-up Birria Balam, which morphed into the permanent restaurant Fonda Balam. But Minton and Luna are not celebrities, nor did they orchestrate any big publicity campaign. It’s mostly come from word of mouth.

“We are two young people who arrived in Canada with nothing, really,” Luna says. “We are very glad and very grateful for the support and the love. We invite all the young people to go for their dreams, because everything is possible.”

They’re working hard to build on the success of their two locations and don’t plan to stop there. Their ultimate dream? Locations all over the country.